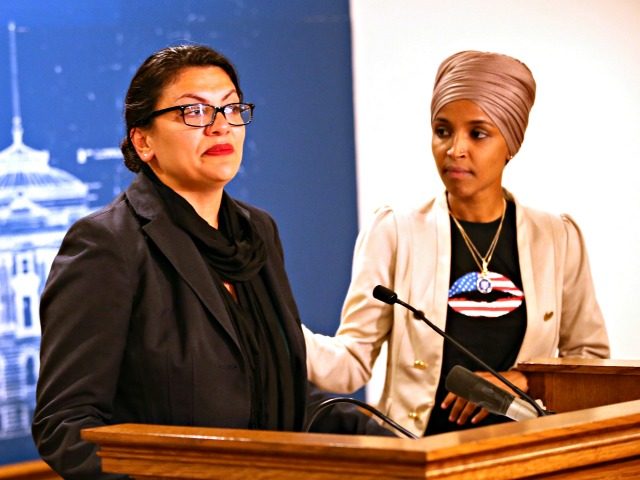 “You, the Muslim community in Georgia, by yourselves, can literally swing this entire election and send two Democrats to the U.S. Senate, which makes [Vice President-elect] Kamala Harris the deciding voter,” said Sansour, who was a founder of the anti-President Donald Trump Women’s March and an open supporter of the Boycott, Divestment, and Sanctions (BDS) movement targeting Israel.

The Congresswomen and Sarsour also support Democrat Jon Ossoff in an effort to unseat Sens. Kelly Loeffler and David Perdue.

“[Muslims] can actually alleviate harm and suffering on millions of immigrants in this country, particularly on the issue of immigration reform, on issues of climate change – I mean, the planet is dying, folks. Even if you win justice and there’s no planet, it’s not going to work,” Sarsour said.

The National Review reported on the effort:

Their support could prove troublesome, particularly for Democrat Raphael Warnock, who is trying to convince voters that he would be a friend to Jews and to Israel. As a candidate, he’s tried to walk back past statements comparing Israel to apartheid South Africa and accusing Israeli soldiers of shooting down unarmed Palestinians “like birds of prey.”

While promoters had described Sunday’s event as a nonpartisan get-out-the-vote effort, the organizers raised money through ActBlue, a fundraising platform for Democratic candidates and progressive organizations. And the speakers were not shy about saying who they believe Georgia Muslims should go out and vote for.

Omar sponsored a House resolution designed to support the BDS movement and accused pro-Israel Americans of having an “allegiance to a foreign country.” Before she was elected, Omar accused Israel of “hypnotizing the world.”

“I feel like you all have this opportunity, that has just been given, almost like in a gift, that has been given to all of you to represent the Muslim community nationally,” said Tlaib, who also supports the BDS movement. The National Review reported:

In 2015, [Warnock] also linked Israel to apartheid, and also likened Israel prime minister Benjamin Netanyahu to segregationist former Alabama governor George Wallace. And in a 2013, Warnock called the Nation of Islam an “important” voice for African Americans and for the development of black theology, “because it was the black Muslims who challenged black preachers and said that you’re promulgating, they called it the white man’s religion. And that’s a slave religion.”

As Breitbart News has reported, CAIR has claimed in the past that American foreign policy is partly to blame for terrorism against Americans. In December 2015, the organization offered legal assistance to the family of the terrorists who killed 14 and wounded nearly two dozen other people in a terror attack on a holiday party in a local government office.

As Breitbart News has noted:

“In 2007-8, CAIR was named an unindicted co-conspirator in the terror financing trial of the Holy Land Foundation for Relief and Development. That case, in turn, led the FBI to discontinue its work with the organization. In 2009, a federal judge ruled that the government “produced ample evidence to establish” the ties of CAIR with Hamas, the Palestinian terror organization. The United Arab Emirates labeled CAIR a terrorist organization in 2014 (a decision that the Obama administration opposed).”