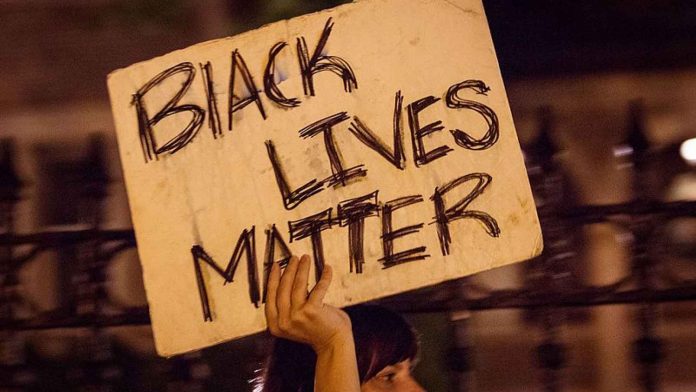 By the time violent rioters tore through the heavily Jewish neighborhood of Fairfax, Los Angeles on the night of Saturday May 30, 2020, it was too late. The vicious antisemitic, anti-Israel language of the M4BL and Black Lives Matter’s demands that included accusations against Israel of “apartheid” and “genocide” had been brushed aside. Black Lives Matter (BLM) delegations had traveled to the Middle East to endorse Palestinian terrorists in Gaza, Judea, and Samaria and pose for photo ops with the Palestinian flag. Statements from delegation leaders spoke of “occupation, ethnic cleansing and brutality” that Israel supposedly has perpetrated against the region’s Arab-Muslim population.

Even when city after city across America went up in flames after the May 25, 2020 killing of African-American George Floyd in Minneapolis by a white police officer, with BLM ‘protesters’ assaulting private businesses, their owners, and law enforcement officers alike, smashing store fronts, setting fires, and destroying property, some among America’s Jewish leadership could hardly get their statements of support out fast enough. Jewish American organizations, the Reform Movement, rabbinical leadership figures, progressive and Zionist activists, even the Hasidic Community of Crown Heights, Brooklyn in New York City all practically fell over one another in their haste to endorse the BLM movement.

The Jewish Federation of Santa Barbara was no different. On June 13, 2020, the group – including, among others, the Jewish Federation of Greater Santa Barbara, ADL Santa Barbara Tri-Counties, Santa Barbara Congregation of B’nai B’rith and Santa Barbara Hillel – issued a statement to condemn “racism” and “institutional biases.” The Focus Project, whose online website is remarkably empty, disseminated a set of talking points on June 16, 2020 that appear to date from September 2019. An increasingly popular trope is included among them that distorts the ancient Jewish term ‘Tikkun Olam’ in a way to make it seem like some kind of modern-day social justice program. In fact, ‘Tikkun Olam’ is a Kabbalist term that made its way into Judaism by way of the Aleinu prayer that is specific to Rosh Hashanah. ‘Tikkun Olam’ is not from the Torah (md’oraita) in origin at all – and therefore not one of the 613 obligatory commandments (mitzvot) nor anywhere to be found in the normative rabbinical literature concerning the praxises of Jewish Law (Halacha). Rather, as a kind of companion bit of moral guidance, ‘Tikkun Olam’ urges Jews to repair one’s individual relationship to the Almighty by way of observance of the actual ‘mitzvot’, or obligatory commandments that lead to perfecting personal behavior.

Now, just as ‘perfecting of one’s personal behavior before the Almighty’ has nothing to do with the social justice narrative per se, neither does it have anything to do with supporting a communist/Marxist, pro-Maoist organization, one of whose BLM co-founders’ declaration of the group’s Marxist ideology was featured on Twitter just days ago. Yes, the BLM movement was founded by three African-American women with longtime Marxist backgrounds: Alicia Garza, Opal I. Tometi, and Patrisse M. Cullors. Its original Platform (issued in August 2016, but scrubbed up a bit in its more recent iteration) called for collective ownership of all resources, the breaking up of banks, redistribution of wealth by way of confiscatory taxes on ‘high earners,’ free health care, and free education. Truly, Karl Marx would have blushed.

But back to the question of how BLM rioters came to be rampaging through Jewish neighborhoods of Los Angeles, CA, reportedly shouting “F___Jews”, and spray painting “F___Israel” and “Free Palestine” on the walls of the Congregation Beth Israel and at least four other synagogues. How did Jews come to be collectivized into the enemy “white privilege proletariat” class by these BLM Marxists?

That original BLM Platform also explicitly supports the BDS (Boycott, Divest, and Sanction) movement. Another indicator comes from Cullors (who organized the 30 May pogrom in LA): she reportedly told a New York Times reporter, “Let’s go into the heart of what is symbolically white in Los Angeles, which is Beverly Hills…These people need to hear our pain and our grief. We wanted to bring this to communities who often aren’t dealing with police violence.” No matter the color of their skin, therefore, Jews are going to be labeled “white”—as a pejorative from which it is always going to be impossible to escape. It goes back farther than that, however. By 2015, BLM representatives traveled to the Middle East to make common cause with Palestinians in Gaza, Judea and Samaria. Fast forward to late May 2020, shortly after the death of George Floyd, and the Democratic Socialists of America’s BDS national working group blatantly tried to link that killing to Israel, by claiming that U.S. police forces learned riot control techniques from Israeli police. Then, on June 1, Al-Awda, the Palestinian Right of Return Coalition, published a hideous cartoon at its website showing an Israeli soldier with his knee on the neck of a keffiyeh’ed Palestinian, arm-in-arm with an American police officer with his knee on the neck of a black man. The article it accompanied was entitled “Al-Awda PRRC statement of solidarity for Black lives and Black struggle.”

The BLM’s Marxist agenda is on full display across America today. Exploitation of the insurrectionist riots in which it plays a leading role to demonize Jews and Israel is, too.