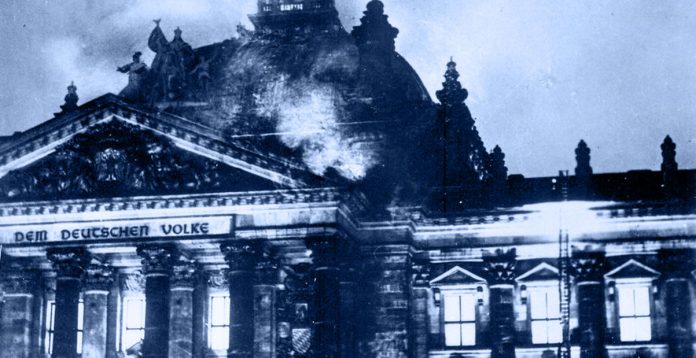 Rich Higgins was interviewed on Conservative Review podcast analyzing the events of January 6:

Episode 790: We never thought this would happen in America, but here we are with a ruling class that not only steals an election, but then seeks to crush the opposition, third world-style. But they needed a pretext. Well, as Rich Higgins, former director of strategy planning at the National Security Council, warns, they got that pretext by turning the Capitol Hill riot into America’s Reichstag fire. Higgins explains how we are headed down a very slippery slope, all brought on by design.

FEBRUARY 28, 1933
The day after the German parliament (Reichstag) building burned down due to arson, President Hindenburg issues the Decree for the Protection of People and the Reich.

Though the origins of the fire are still unclear, in a propaganda maneuver, the coalition government (made up of Nazis and the Nationalists) blamed the Communists. They exploited the Reichstag fire to secure President Hindenburg’s approval for an emergency decree, popularly known as the Reichstag Fire Decree, that suspended individual rights and due process of law. The Reichstag Fire Decree permitted the regime to arrest and incarcerate political opponents without specific charge, dissolve political organizations, and to suppress publications. It also gave the central government the authority to overrule state and local laws and overthrow state and local governments. The decree was a key step in the establishment of the Nazi dictatorship. Germany became a police state in which citizens enjoyed no guaranteed basic rights and the SS, the elite guard of the Nazi state, wielded increasing authority through its control over the police.