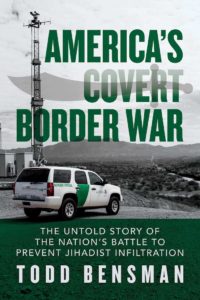 Bensman is an experienced observer of his subject. This former Texas journalist became in 2009 a senior intelligence analyst with the Texas Department of Public Safety’s Intelligence and Counterterrorism Division. With federal security clearance, he worked firsthand with federal agents in Texas government “fusion center” on border security issues.

Particularly since Al Qaeda’s September 11, 2001, terrorist attacks, Democratic and Republican administrations alike have worried about terrorist threats breaching America’s southern border, Bensman has documented. With bipartisan backing, officials have “deployed an internationally expansive, ambitious, and somehow almost entirely unreported counterterrorism enterprise at the border and along its Latin American approaches.” Yet this machinery “just became a victim of its own success in preventing jihadist attack” and has gone largely unnoticed.

Nonetheless, a “river of migrants from the Middle East and Muslim-majority countries, never dry, does indeed flow through Latin America and over the US southern border,” Bensman writes. In contrast to Latin American migrant streams into the United States, America officials designate these long-distance voyagers Special Interest Aliens (SIAs). “At several thousand per year in recent times, SIAs make up less than a percent of the federal government’s roughly half a million annual apprehensions within one hundred miles of the southern border.”

“Real terrorists—though a minority of a minority—have ridden” this influx, Bensman warns, yet powerful political incentives exist to downplay such dangers. Otherwise national security concerns might provoke a “tougher national immigration policy that would negatively impact a broad diversity of stakeholders that want illegal Hispanic immigration, even need it.” These include “agribusiness, the non-profit migrant advocacy industry,” and “US politicians interested in the Latino vote, not to mention the immigrants themselves.”

Similar ideological motives dissuade largely leftist-leaning journalists from examining America’s southern border security, Bensman has found. “Disclosing and critically examining secret government programs, especially those having to do with counterterrorism after 9/11, was always a spigot of media pride and Pulitzer Prizes.” Yet in his experience fellow journalists have shown little curiosity in investigating counterterrorism stories amidst the huddled masses entering America. Meanwhile the government often deports apprehended SIAs without public trials in order to shield operational secrets.

American officials also confront complex political interests in the United States’ “‘far war’ to ensnare jihadist migrants before they reach the homeland border,” Bensman notes. Latin American countries such as Costa Rica, Mexico, and Panama often have had a “‘Controlled Flow’ free passage policy” for migrants who merely want transit to America. Particularly “Mexico’s record of cooperation in disrupting general illegal immigration is less than stellar because Mexico is conflicted.” Indeed, “Mexico’s national interests are served by the $25 billion a year in American remittance cash its citizens working illegally in the United States send back to Mexico.”

“But when it comes to migrants from the Islamic world, Mexico was and is just as self-interested,” Bensman has critically distinguished. In 2007, Mexico’s then ambassador to the US, Arturo Sarukhan, explained to Bensman the possible fallout from any terror attack traced to a crossing of America’s southern frontier. The subsequent crackdown “could catastrophically disrupt not only normal trade with Mexico’s biggest trading partner but also those billions in annual remittances.”

Accordingly, Latin American countries wanting Uncle Sam’s favor geopolitically profile suspicious migrants with American assistance and prodding. American intelligence, for example, has alerted Guatemalan officials to be on the lookout for “people with Arabic features.” Costa Rica, with American cooperation, has “normalized jihadist apprehensions and interrogations in the jungle.”

America’s enemies in Latin America and beyond Bensman has documented in his wide-ranging research trips, are less helpful. In the Middle East, “hostile embassies and consulates” of countries such as Cuba, Syria, and Venezuela can “grant travel visas to just about anyone, with little regard for US sensitivities or perhaps with sadistic intent.” These papers “are essential for SIAs and terrorists to board aircraft and make Western Hemisphere landings within striking distance of the US border.”

Europe’s migrant crisis of recent years raise alarm about the dangerous opportunities open borders offer jihadists. “Between 100 and 150 terrorists and their helpful acolytes were among the three million migrants who stole over European borders during the 2014–2017 migrant crisis,” Bensman notes on the basis of the best available research. This “relative handful of jihadists altered societies there just as dramatically as they did in America after 9/11,” disproving that “smallness of number equates to smallness of threat.”

West Point’s Combating Terrorism Center determined in a 2019 study that jihadist terrorism in Europe between 2014 and 2018 claimed more lives than in the previous 20 years. Perhaps most dramatic in this carnage were six coordinated attacks throughout Paris on November 13, 2015, that claimed more than 130 dead. Here Islamic State suicide bombers gained entry to Europe with fake Syrian documents.

Europe’s aftershocks have been considerable, Bensman notes. Europeans subsequently “contended with sudden running gun battles in the streets” and “concrete barricades that transformed major cities from one end of the continent to the other into seemingly permanent securitized green zones.” RAND determined that between 2013 and 2016 terrorism cost European societies at least 90 billion Euros.

The European experience particularly concerns Bensman, for both Europe and America have “asylum systems that seem almost engineered to usher in jihadists rather than to deter and detect their many easy frauds.” Typically asylum claims trigger lengthy adjudication processes, during which claimants may live at liberty and from welfare in host countries, provisions that deceptive jihadists can easily exploit. In his studies of Europe, Bensman “found that asylum processes provided an average of eleven months of freedom and public assistance support for fifty-five jihadist migrants.”

Bensman thus provides revealing insight into a little examined, yet vital topic. As he shows, America’s southern border is one vulnerable point of entry for jihadists into the United States, which only often unheralded vigilance has kept closed. Maintaining this vigilance will require wider public understanding of the border security operations Bensman has experienced firsthand.