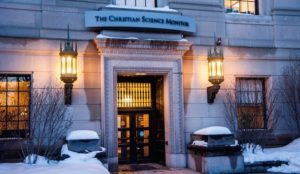 The Christian Science Monitor did its bit Friday for the left’s propaganda barrage, reminding us all that America is a benighted, sinister land full of racism, xenophobia, and Islamophobia, such that only Old Joe and his henchmen can save us. The Monitor painted a picture of an innocent World Cultures and Geography class in a New Jersey public school teaching about Islam and getting accused by racist redneck yahoos of proselytizing for Islam. As far as the Monitor is concerned, it’s a story of evil Trump followers hating the sainted Other; in reality, however, it reveals how Islamic indoctrination is becoming increasingly common and accepted in public schools.

In January 2017, the Monitor notes, a parent, Libby Hilsenrath, “was reviewing her son’s schoolwork when she learned about the Islam-related unit.” When she saw this flagrant proselytizing, she “complained to the school district and [by now you can be sure that the Christian Science Monitor writer was literally shaking] appeared on Fox News to discuss her concerns.”

The result? Death threats, of course, fitting nicely into the left’s propaganda narrative of violent right-wingers menacing doe-eyed, peaceful, daisy-picking leftists. According to another parent, Melissa Cavallo, “the threats were serious enough to have police at the middle school and the district administration building.”

True to form for a leftist propaganda organ, the Monitor doesn’t consider the question of whether the Chatham Middle School material did actually proselytize for Islam and thus had no business in a public school. Instead, its story is all about the hatred, racism, xenophobia and Islamophobia supposedly displayed by those who raised concerns, and how important it is for children to learn about diversity – especially “those living in homogenous areas.”…

There is more. Read the rest here.