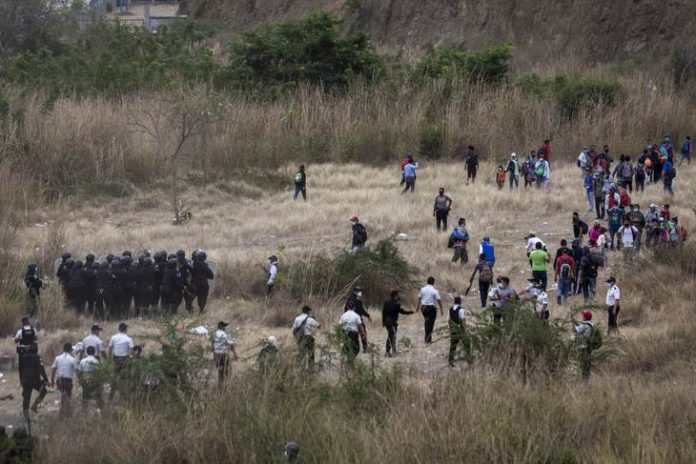 A border facility in Carrizo Springs, Texas, re-opened this week dedicated exclusively to holding children unaccompanied by their parents to await processing. The facility had to be reopened, after being shuttered during the Trump administration, in order to comply with new pandemic regulations, says the Biden administration.

“They’re reinstating catch and release, that’s why these facilities are needed because they’ve created a new crisis,” Morgan said.

Morgan continued, asserting that the administration is releasing illegal immigrants into the country and “preventing ICE from lawfully deporting 90% of those that they’re encountering here illegally.”

It’s only going to get worse and the Biden administration is already running out of space to hold them.

An internal memo sent Wednesday and obtained by The Associated Press authorizes facility operators to use government funding for transport fees “in the event that a sponsor is not able to pay fees associated with commercial airfare, and a child’s physical release would be otherwise delayed.” HHS declined to say how many flights would be funded.

HHS has drastically cut its capacity due to the coronavirus pandemic. Nearly all of the department’s 7,100 beds for immigrant children are full. Meanwhile, Border Patrol agents are apprehending an average of more than 200 children crossing the border without a parent per day. Most Border Patrol facilities aren’t equipped for long-term detention, with children forced to sleep on mats in cells where the lights stay on around the clock.

Illegal alien children must be released in 72 hours, according to the law. That’s impossible, of course. Currently, many children are held for 4 or 5 days — even longer in some cases. No report on the conditions the children are held in but were you really expecting the media to pay attention?

The only reason it’s an issue at all is that the migrant surge is growing far faster than immigration authorities can manage it.

U.S. Health and Human Services on Wednesday authorized operators of long-term facilities to pay for some of the children’s flights and transportation to the homes of their sponsors. Under the agency’s current guidelines, sponsors can be charged for those flights and required to pay before the government will release children, even if the sponsors have been vetted by the government.

Those costs can sometimes exceed $1,000 per child.

Paying someone up to $1000 to take a child off the hands of the government is just a taste of what’s coming. Biden’s welcoming rhetoric is giving hope to hundreds of thousands of potential migrants who were discouraged from coming during the Trump administration and are now having the door to the country thrown open for them.

It’s not that the president and his people don’t know that they are creating a crisis at the border. They are fully aware of the consequences of their policies. But Biden can’t afford to buck the Hispanic activists who helped him get elected and his policies are payoffs to them for their support.

Meanwhile, it’s going to get very messy very fast at the southern border.

The pandemic’s over, but only at the border