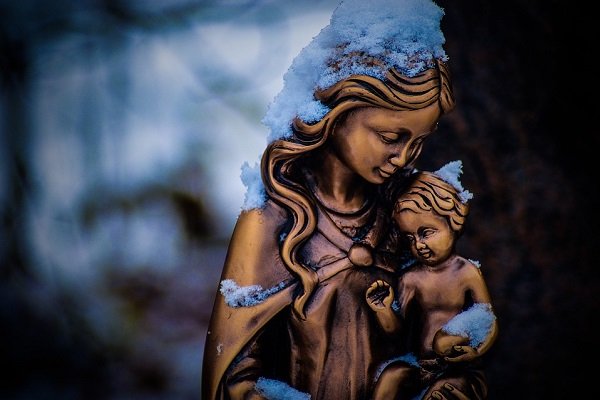 The same folks to bring you “Abrahamism”—the idea that Judaism, Christianity, and Islam are intricately connected—have narrowed their sights on promoting Mary, the mother of Christ, as “a Jewish, Christian and Muslim woman,” in the words of Catholic priest Fr. Gian Matteo of the Pontifical International Marian Academy.  In a ten-week webinar series titled “Mary, a model for faith and life for Christianity and Islam,” the academy will seek to present Mary as a bridge between the two religions.

This is easier said than done — at least for those still interested in facts.  For starters, the claim that Mary was a “Jewish, Christian and Muslim woman” is only two-thirds true: yes, she was a Jew by race and background, and yes, she was a Christian in that she literally birthed Christ(ianity), but she was most certainly not a Muslim — a term and religion that came into being 600 years after Mary died.

Worse, far from being the Eternal Virgin, as she is for 1.5 billion Christians of the Catholic and Orthodox variety, Islam presents Mary, the Mother of Christ, as “married” to and “copulating” with Muhammad in paradise — a depiction that would seem to sever rather than build “bridges.”

In a hadith that was deemed reliable enough to be included in the renowned Ibn Kathir’s corpus, Muhammad declared that “Allah will wed me in paradise to Mary, Daughter of Imran,” whom Muslims identify with Jesus’s mother.  (Note: The Arabic word for “marriage” (نكاح, or nikah, denotes “legal sexual relations,” connotes the “F” word, and is wholly devoid of Western, “romantic,” or Platonic connotations.)

Nor is this just some random, obscure hadith.  None other than Dr. Salem Abdul Galil — previously deputy minister of Egypt’s religious endowments for preaching — affirmed its canonicity in 2017 during a live televised Arabic-language program.  Among other biblical women (Moses’s sister and Pharaoh’s wife), “our prophet Muhammad — prayers and be upon him — will be married to Mary in paradise,” Galil said.

If few Christians today know about this Islamic claim, medieval Christians living in Muslim-occupied nations were certainly aware of it.  There, Muslims regularly threw this fantasy in the face of Catholic and Orthodox Christians who venerated Mary as the “Eternal Virgin.”  Thus, Eulogius of Cordoba, an indigenous Christian of Muslim-occupied Spain, once wrote, “I will not repeat the sacrilege which that impure dog [Muhammad] dared proffer about the Blessed Virgin, Queen of the World, holy mother of our venerable Lord and Savior. He claimed that in the next world he would deflower her.”

One expects that all of these “inconvenient” facts will be quietly passed over during the Pontifical International Marian Academy’s webinars.  And if they are raised, no doubt Christians will somehow take the blame, as almost always happens in academic settings.  As one example, after quoting Eulogius’s aforementioned lament against Muhammad’s claim of being married to Mary, John V. Tolan, a professor and member of Academia Europaea, denounced it as an “outrageous claim” of Eulogius’s own “invention.”  He then railed against the martyr — not against his murderers or their prophet:

Eulogius fabricates lies designed to shock his Christian reader.  This way, even those elements of Islam that resemble Christianity (such as reverence of Jesus and his virgin mother) are deformed and blackened, so as to prevent the Christian from admiring anything about the Muslim other.  The goal is to inspire hatred for the “oppressors[.]” … Eulogius sets out to show that the Muslim is not a friend but a potential rapist of Christ’s virgins. (Saracens: Islam in the Medieval European Imagination, p.93)

As already seen, however, it is Muhammad himself — not any “Christian polemicist” — who “fabricates lies designed to shock,” namely that Mary will be his eternal concubine.  This, incidentally, is the main problem the purveyors of Abrahamism fail to acknowledge: Islam does not treat biblical characters the way Christianity does.

Christians accept the Hebrew Bible, or Old Testament, as it is.  They do not add, take away, or distort the accounts of the patriarchs that Jews also rely on.  Conversely, while also relying on the figures of the Old and New Testaments — primarily for the weight of antiquity and authority attached to their names — Islam completely recasts them with different attributes that reaffirm Muhammad’s religion as the one true and final “revelation,” as opposed to Judaism and Christianity, whose biblical accounts on these figures are then seen as “distorted” because they are different from Islam’s later revisions.

Far from creating “commonalities,” it should be clear that such appropriation creates conflict.  By way of analogy, imagine that you have a grandfather whom you are particularly fond of, and out of the blue, a stranger who never even met your grandfather says: “Hey, that’s my grandfather!”  Then — lest you think this stranger is somehow trying to become your friend — he adds: “And everything you thought you knew about grandpa is wrong!  Only I have his true life story.”

Would that create a “bridge” between you and this stranger?

Raymond Ibrahim, author of Sword and Scimitar: Fourteen Centuries of War between Islam and the West, is a Shillman Fellow at the David Horowitz Freedom Center, a Judith Rosen Friedman Fellow at the Middle East Forum, and a Distinguished Senior Fellow at the Gatestone Institute.