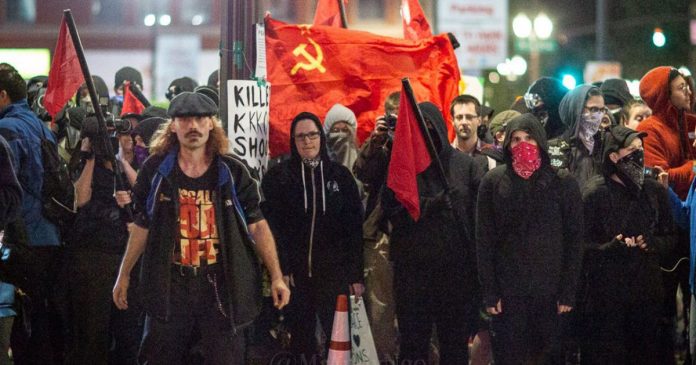 Roads were totally shut down by armed Antifa militants, who utilized stones and sticks against the citizens that opposed their activities.

Antifa engaged in its typical harassment of private citizens, shining bright lights into the windows of residential buildings in some sort of demand for those sleeping inside to come out and join the left-wing terror movement.

As customary for Portland, law enforcement adopted a strict “hands off” approach for Antifa crime, quickly retreating when confronted by the mob of Antifa thugs.

At least one private security vehicle was destroyed in the mob action.

The riot event represents the second event of its kind since Joe Biden’s ascension to the presidential throne. Antifa thugs had attacked none other than the headquarters of the Oregon Democratic Party on the day of Biden’s enthronement, voicing their opposition to the neoliberal Democrat. Biden is understood as a right-wing fascist to the leftist group, which largely adheres to communist and anarchist ideologies.

“Polite” liberals have quietly hoped that the criminal gang would fade into the shadows with the ‘bad orange man’ out of the picture, no longer useful for anti-Trump street actions in the notoriously leftist Oregon city. Feckless Portland Mayor Ted Wheeler finally denounced the left-wing terror group in January, urging stricter criminal penalties for Antifa’s violent actions. It remains to be seen in Antifa will return in force in summer 2021, when national riot movements tend to reach the pinnacle of the yearly strength. However, the ongoing presence of street riots in late February intends the leftist miscreants don’t intend to disappear quietly.