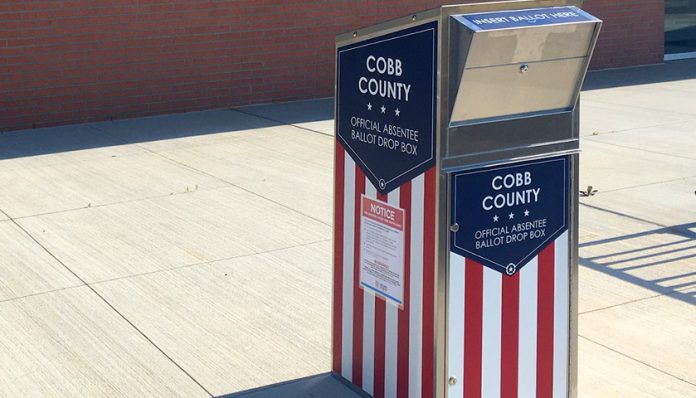 Four months after the November 3, 2020 presidential election, state and county officials in Georgia have failed to produce chain of custody documents for an estimated 404,691 vote by mail absentee ballots deposited in drop boxes and subsequently delivered to county registrars for counting.

As of March 3, only 56 of Georgia’s 159 counties have provided ballot transfer form data to The Georgia Star News. The number of absentee by mail ballots delivered to registrars in those 56 counties total only 195,309, or 32.5 percent, of the estimated 600,000 absentee vote by mail ballots deposited in drop boxes and delivered to county registrars and counted in Georgia’s 2020 presidential election.

In other words, there is no chain of custody for 67.5 percent – an estimated 404,691 – of the estimated 600,000 absentee vote by mail ballots deposited in drop boxes and delivered to county registrars and counted in Georgia’s 2020 presidential election.

The 2020 presidential election outcome in Georgia was decided by fewer than 12,000 votes – about three percent of the 404,000 absentee vote by mail ballots deposited in drop boxes and delivered to county registrars where they were counted.

Georgia county officials have made little progress in the two months since The Star News reported on January 3 that 28 counties had provided ballot transform forms documenting 140,628 vote by mail ballots deposited in drop boxes.

In the two months between January 3 and March 3, 28 additional counties responded, adding ballot transfer form documentation for an additional 54,719 ballots, bringing the total vote by mail ballots deposited in drop boxes for which their is a chain of custody from 140,628 to 195,329.

Fulton County is one of 35 scofflaw counties in Georgia that have failed to comply with the Georgia Open Records Law and provide The Star News with absentee ballot drop box transfer forms they were required to maintain under the Emergency Rule passed by the Georgia State Election Board in July of 2020.

33 scofflaw counties simply failed to respond at all the The Star News Open Records Request:

Fulton County responded by saying they don’t know if they have documents responsive to the open records request and told The Star News they would send forms after Inauguration Day. However no documents have been provided to date.

DeKalb County told The Star News they were unsure if responsive documents existed. Then on December 17, DeKalb County provided documents that were not responsive to the Open Records Request. Instead of providing ballot transfer forms that provided chain of custody records for the movement of ballots from drop boxes to registrars, they provided documents that showed the movement of boxes of absentee ballots from registrars to centralized tabulation areas.

In December, Fulton County officials told The Star News, “We believe we can have responsive records to you by January 19, 2021. That said, should responsive materials come available sooner, we will provide them to you.”

The Star News has received no further communication from Fulton County election officials.

The other counties in Georgia have responded to the records request with either chain of custody documentation or other communications.

A total of 33 counties have responded by stating they did not have any drop box locations. Those counties include:

An additional eight counties – Appling, Chatahoochee, Floyd, Forsyth, Gwinnett, Jeff Davis, Madison and Thomas – have told The Star News they will make their ballot transfer form records available to the public upon the payment of a processing fee.

One county – Laurens County – is sending forms via mail.

Six counties have ballot transfer forms but, for various reasons have not been able to deliver them to The Star News.

Hart County has said it will fax their forms, but they have not yet been received. Brooks County, Lee County and Echols County have forms held at their County Clerk’s office for retention. Jones County and Marion County have their documents kept “off-site.”

Worth County told The Star News, “nothing in this chapter shall require agencies to produce records in response to a request if such records did not exist at the time of the request.”

Carroll County told The Star News it does not have “any documents responsive” to the request in their “possession or control.”

One county – Coffee – sent documents that failed to list the numbers of ballots collected at the ballot drop box locations in that county.

56 counties responded to The Star News open records request with the proper ballot transfer forms, showing that 195,309 absentee vote by mail ballots were deposited in drop boxes and then transported to the county registrar or the county registrar’s designees:

In December, The Star News analyzed the ballot transfer forms provided by Cobb County in response to the Open Records Request and concluded that 78 percent of the 89,860 absentee vote by mail ballots deposited in drop boxes in the county were not transported to the county registrar “immediately” as the Emergency Election Code Rule required.

The Emergency Rule required that every county election office maintain a ballot transfer form that documented the movement of every absentee by mail ballot placed in a drop box and delivered to the county registrar prior to the election, with the number of absentee ballots picked up from each drop box, the signature of the two person team who picked up the ballots, the time of the pickup, and the time of the delivery of those ballot to the registrar, and the name of registrar who received those ballots.

A month after the 2020 general election, The Star News filed open records requests with all 159 counties requesting copies of absentee ballot transfer forms. The forms are documents used to account for absentee ballots left in drop boxes in locations across the state.

From December 3 – 11, The  Star News submitted separate Open Records Requests to all 159 counties in the state that said:

I am submitting the following Open Records Request to you today;

Please provide copies of all ballot transfer forms used in the county in the November 3 election to document the chain of custody for all absentee ballots placed in drop boxes by voters and transported to the county registrar, as required in the Election Code Emergency Rule passed by the State Election Board on July 1, 2020.

The Open Records Request laws in Georgia state that counties have three days to respond to the request.

According to the Prosecuting Attorneys Council of Georgia:

Now, more than 80 days after the first open records requests were issued,  37 of Georgia’s counties have failed to provide any documentation that would produce the evidence of the lawful collection and accounting for the general election’s estimated 600,000 absentee vote by mail ballots deposited in drop boxes.

Throughout the state, approximately 300 drop boxes were used to collect absentee ballots in the November 2020 election. The drop boxes were made possible, in part, by donations to the counties from the Center for Tech and Civic Life (CTCL) – a 501 (c) (3) funded by Facebook founder Mark Zuckerberg and his wife Priscilla Chan.

Zuckerberg  made a $350 million donation to the CTCL 2020 election efforts. More than $24 million of CTCL funding was distributed to Fulton, Gwinnett, Cobb, and DeKalb counties alone.

The drop boxes were authorized under Georgia Election Code Emergency Rule 183-1-14-0.8-.14 approved by the State Election Board in July 2020 (but notably not approved in a statute passed by the Georgia General Assembly, which states that every absentee ballot drop box collection team “shall complete and sign a ballot transfer form upon removing the ballots from the drop box, which shall include the date, time, location and number of ballots.”

In the wake of the controversial November election, Georgia lawmakers have moved to disallow Zuckerberg-style private funding of election administration, among other reforms.

Tiffany Morgan is a reporter at The Georgia Star News and the Star News Network. Email tips to tiffbamorgan@gmail.com.