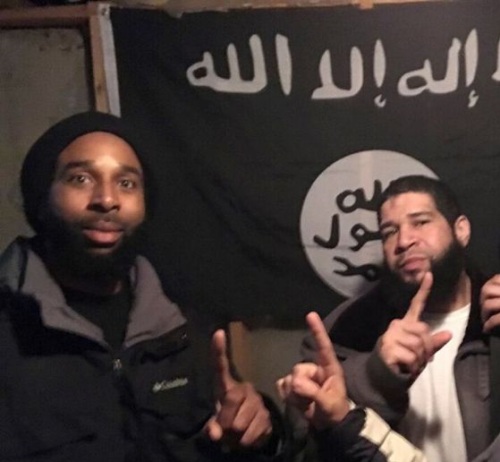 White, right-wingers no doubt. He faced 20 years but only got 12.

CHICAGO — A man from a north suburb of Chicago was sentenced today to 12 years in federal prison for conspiring to provide material support to the Islamic State of Iraq and al Sham, a foreign terrorist organization also known as ISIS.

U.S. District Judge Andrea R. Wood imposed the sentence on JOSEPH D. JONES, 38, of Zion, Ill.  A jury in 2019 convicted Jones on one count of conspiring to provide material support and resources to ISIS.

Evidence at trial revealed that Jones advocated on social media for violent extremism in support of the terrorist group.   In 2015, Jones began meeting with undercover FBI employees and individuals who, unbeknownst to Jones, were cooperating with law enforcement.  During the meetings, Jones discussed his devotion to ISIS and his commitment to ISIS principles.

A co-defendant, EDWARD SCHIMENTI, 39, of Zion, Ill., was also convicted of the conspiracy charge, as well as a charge of making false statements to the FBI.  Judge Wood set sentencing for Schimenti for April 9, 2021, at 12:30 p.m.

They made no effort to hide their jihadist leaning.

Joseph D. Jones and Edward Schimenti proudly waved a terrorist flag during a photo at a Lake Michigan park in Zion, had plotted to attack the Navy’s main U.S. training center near North Chicago and once had their eyes on planting an ISIS flag atop the White House.

Now Jones and Schimenti, both 37, have been found guilty of providing material support to ISIS.

The pair had been involved with a trio of federal operatives during the early stages of the investigation. Jones and Schimenti believed all three FBI associates were ISIS backers, investigators said.

They plotted to stage bomb attacks on behalf of ISIS according to authorities. The criminal complaint against the men was unusual because it included numerous photographs of the men charged. Federal prosecutors in Chicago rarely release pictures of newly-charged defendants, especially photographs that are considered potential evidence in the case.

Among the pictures in the complaint were ones taken at the Illinois Beach State Park on the Lake Michigan shoreline in Zion. They depict Jones and Schimenti holding ISIS flags. “Abdul Wali” Schimenti, is heard on FBI undercover tape saying he would like to see the ISIS flag “on top of the White House” according to investigators.