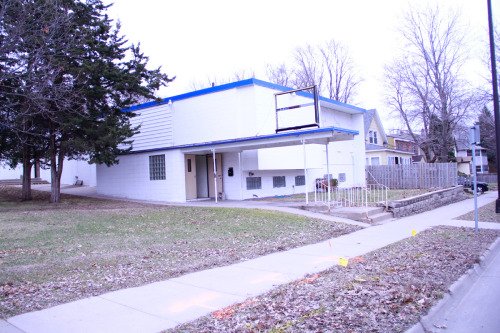 Zoning jihad. The mosque already appears to be in a residential area – possibly converted from a home.

How does a regional zoning “master plan” that was “spoken for” 15 years ago become an attack on “religious liberty” in 2021? When a mosque and the Council on American Islamic Relations (CAIR) say so — or so they see it.

When Islamic supremacists are either challenged over their entitlements or refused such entitlements, invariably they levy accusations of  “Islamophobia” and claim a violation of their “religious rights.”

The Masjid Salaam Cultural Center in northeast Minneapolis expects to be awarded land for parking for their convenience.

The mosque’s imam, Abdimagid Omar, opened the mosque in 2016 and expected to get parking land, despite the fact that the land had been designated for other purposes since 2006. That didn’t matter.

Omar “said no one has harassed him in the vicinity of the mosque, but he would feel safer being able to park closer.”

He went on to say, absurdly:

When you are an immigrant, when you’re Black, when you’re Muslim, when you come into a neighborhood where you don’t live just to pray, anything can happen.

That was his argument. So now the mosque and CAIR are demanding that the city change its plans.

Buying city parkland is almost impossible… The Park Board is required to hold its land in public trust, says general counsel Brian Rice. “The presumption is that this board does not sell land.”

No such presumption is respected by Islamic supremacists when moving into an infidel community. Dhimmis are expected to comply; otherwise they will be slapped with the label of “Islamophobic.”

CAIR, an unindicted co-conspirator in a Hamas jihad terror funding case, is infamous for making outrageous demands, and here is another:

The Council on American-Islamic Relations Minnesota (CAIR-Minnesota) gave the Park Board a deadline this month to avoid a lawsuit.

Until Westerners refuse to be bullied and stop bowing to name-calling, propaganda, and manipulation, the West will keep losing the war against Islamization, as is clearly happening in Minnesota.

The Masjid Salaam Cultural Center in northeast Minneapolis hosts daily prayers, Sunday school and the occasional food drive. But members say the mosque has one major flaw — it has no designated parking.

That means people coming to the mosque, including the elderly and disabled and the 170 children who attended school there before the pandemic, have to park several blocks away or get out of vehicles on the side of busy Central Avenue.

The mosque has tried for years to persuade the Minneapolis Park and Recreation Board to build parking stalls by paving over green space along St. Anthony Parkway. The conflict pits assertions of religious liberty against the sanctity of public parkland, and it’s coming to a head after the Council on American-Islamic Relations Minnesota (CAIR-Minnesota) gave the Park Board a deadline this month to avoid a lawsuit.

When Masjid Salaam opened at 3141 NE. Central Av. in 2016, Imam Abdimagid Omar believed he could persuade the Park Board to sell the mosque a slice of adjacent parkland. Omar isn’t fluent in English, so he appointed congregant Abdi Barkat as his spokesman. Barkat works near Masjid Salaam and has been praying there during his lunch hour for about two years.

He said no one has harassed him in the vicinity of the mosque, but he would feel safer being able to park closer. “When you are an immigrant, when you’re Black, when you’re Muslim, when you come into a neighborhood where you don’t live just to pray, anything can happen,” Barkat says.

Buying city parkland is almost impossible, however. The Park Board is required to hold its land in public trust, says general counsel Brian Rice. “The presumption is that this board does not sell land.”

The Park Board can sell land if commissioners decide it’s obsolete and unusable for any park purpose. Even then, a district judge would have to approve the sale.

But the land is already spoken for in the 2006 St. Anthony Parkway Regional Park Master Plan, which specifically calls for landscaping, public art and seating there.

The mosque could petition the Park Board to change the master plan, which would require a majority vote. But the commissioner for the area, Chris Meyer, is against it, and has been lobbying to get rid of parking lots since before he was elected to the Park Board.

Meyer moved from Sturgis, S.D., to Minneapolis at age 18 so he wouldn’t have to drive. He has never had a driver’s license. In 2015, he bought 13 copies of “The High Cost of Free Parking” by Donald Shoup to give each Minneapolis City Council member, then successfully campaigned to eliminate parking requirements around train stations.

“That has been my thing. That’s what I do,” Meyer says. “My passion is trying to move our city in a less car-dependent direction.”

The mosque persisted. In 2018, it purchased its building and found an ally in Commissioner AK Hassan…