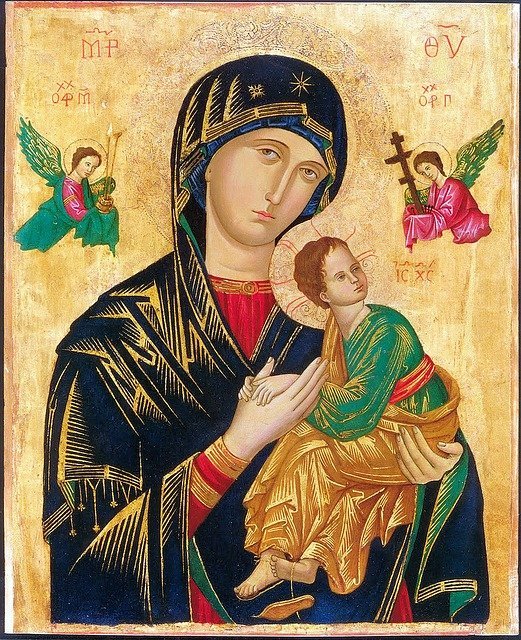 The Vatican is currently hosting a series of webinars on “Mary as a model for faith and life for Christianity and Islam.” This is part of a push by the Vatican to reconcile with Islam by emphasizing the biblical figures that the two faiths share in common, such as Abraham, Jesus, and Mary. But none of the biblical figures have any organic connection with Islam. Six hundred years after the birth of Christ, Muhammad appropriated numerous characters from the Bible and put them in his Koran in order to appeal to Christians and Jews–and for other reasons. Muhammad hijacked Jesus and Mary from the gospels and used them for his own purposes in the Koran. As shown in the article below, Muslims still use their reverence for ‘Jesus’ and ‘Mary’ as a selling point to convert Christians to Islam. Naive Catholic leaders should not join in the pretense that the Jesus and Mary in the Koran are the same as the Jesus and Mary believed in by Christians.

1,400 years ago, Muhammad hijacked Jesus from the gospels, demoted him to prophet, and placed him in the Koran.  Christianity was Islam’s main competition at the time, and Muhammad seems to have reasoned that it was better to co-opt Jesus than to denounce him.

Jump ahead 1400 years, and we find that some Muslims are still manipulating the figure of Jesus for political and religious purposes.  For example, Muslims in the West Bank have for several years been proclaiming that Jesus was the “first Palestinian.” They claim, moreover, that when Israelis place restrictions on Palestinians, “Jesus is being crucified again.”  The latest twist on that story is that Jesus was also the first martyr for Islam.  Tawfiq Tirawi, a senior member of the Palestinian Authority posted the following on his Facebook page:

This is blessed Christmas, the birthday of our Lord Jesus the Messiah, the first Palestinian and the first Shahid (Islamic Martyr).

I bring this up because many Christians have only a hazy understanding of the place of Jesus in Islam and some are completely unaware that Jesus does have a place in Islam.  Catholics, however, should know that Muslims “revere” Jesus because that’s what it says in the Vatican II document Nostra Aetate, and almost everyone who has attended Catholic schools in recent decades will have been appraised of the high esteem that Muslims have for Jesus.

But for many Catholics, that’s all they know about Jesus and Islam.  And it simply isn’t enough now that Islam has passed through its mid-century sleepy-time phase, and has re-emerged as a world power.  It’s important to recall that Nostra Aetate was written in 1965—right in the midst of that quiescent era– and it was meant to convey a positive picture of Islam, not a complete one.

Islam has emerged from its mid-century slumber, but many Catholics have not emerged from theirs.  They won’t admit that the Vatican II sketch of Islam is woefully inadequate for understanding born-again militant Islam.

Take the claim by the Palestinian leader that Jesus was the first Islamic martyr.  Anyone with a basic knowledge of Islam would immediately realize that Tirawi was either a) very poorly informed about Islam or b) deliberately deceiving for propaganda purposes.  Jesus could not have been an Islamic martyr because the Koran denies that he was crucified.  Instead the Koran claims that someone else who looked like Jesus was mistakenly crucified in his place. (4:157)

But suppose for a minute that Jesus gave up his life for the sake of Allah as the Palestinian leader claims.  That presents another difficulty for Catholics who think that Muslims venerate the same Jesus that they do.  According to Islamic tradition, the reward that the Islamic martyr receives in paradise is 72 dark-eyed virgins.

The concept is, of course, offensive to Catholics and other Christians.  It not only reveals that Muslims have a complete misunderstanding of who Jesus is, but also a rather base conception of our final destiny.

But since the Koran says that Jesus was not martyred, the question of virginal rewards is moot.  Or is it?  While Islamic scholars are agreed that martyrdom is the surest way to paradise, one doesn’t have to be a martyr to get there.  One authoritative guide to Islamic law asserts that “whoever believes in Allah and dies as a believer is one of the inhabitants of paradise…” (Reliance of the Traveller, p1.3).  After all, Muhammad didn’t die as a martyr either.  Yet, one assumes that, from an Islamic point of view, he is safely in the company of his 72 companions– or, perhaps in his case, 144 or more.  Although Muslim males are restricted to four wives at a time on earth, Allah declared that Muhammad could have as many as he desired.

Nostra Aetate assures us that Muslims “value the moral life,” and the implication is that it’s more or less the same moral life that Christians value.  But when it comes to sexual ethics and the equality of men and women, it’s quite obviously a different kind of moral life that is valued.  Indeed, from a Christian perspective it’s an immoral life.  Heaven is nothing more than a glorified harem.

Christians need to be careful about projecting Christian assumptions onto Islam.  It’s particularly tempting to assume that the Jesus Muslims honor is none other than the Jesus of the gospels.  But he’s not the same Jesus.  For one thing, he’s not even a Christian (or Jew).  He’s a Muslim.  If he were a Christian, he would end up in hell not paradise.  Why?  Because the worst sin anyone can commit is the sin of shirk—ascribing associates to Allah.  Thus, believing in the Trinity is a great sin since that article of faith describes God as a unity of three persons.  The Koran is quite adamant that “whoever ascribes associates to Allah, Allah has forbidden him paradise, and his refuge is hell” (5: 72).  Since the Jesus of the gospels claims to be the Son of God, he would be guilty of shirk in the highest degree, and thus, to put it mildly, ineligible for paradise.  The Jesus of the Koran, on the other hand, vows to Allah that he had never claimed to be God (5:116). He knows the rules, and as a good Muslim he follows them.

The closer one looks at the Jesus of the Koran, the more difficult it is to believe that he is the same Jesus we find in the gospels.  He is no longer a Christian but a convert to Islam.  When he comes again, according to Reliance of the Traveller, “he will not rule according to the Evangel [the Gospel]. But as a follower of our Prophet.” (o9.8)

Not only that, but at the Last Judgement, Jesus will bear witness against Christians who have not converted to Islam (Koran 4: 159).  This might come as a bit of a shock to Catholics who have heard that Islam has high regard for the “people of the book”—i.e., Christians and Jews.  Isn’t it enough, they may ask, to follow their own faith as long as they are people of the book?

Well, yes and no.  At one time it was enough, but no more.  Not with the arrival of Muhammad on the scene.  Reliance of the Traveller puts it this way:

Whoever adhered to the Evangel and precepts of Jesus, their faith was valid and acceptable until the coming of Muhammad (Allah bless him and give him peace.)  Those of them who did not then follow Muhammad and give up the sunna of Jesus and the Evangel, were lost. (w 4.4)

In short, at a certain point in history, Allah threw the book at the people of the book for not switching to the 2.0 version of his religion.  The new version essentially replaced the old:

Allah Most High sent Muhammad …to deliver His inspired message to the entire world…superseding and abrogating all previous religious systems with the Prophet’s Sacred Law (Reliance of the Traveller, v. 2.1).

Muhammad hijacked Abraham, Moses, and Jesus (all re-imagined as Muslim prophets) to help sell his patchwork creation.  And Muslims are still trying to enlist Jesus in order to sell Islam. Only now, they use modern advertising methods to promote their message. So, don’t be surprised if the next time you’re cruising down the highway, you encounter a billboard suggesting that you “Find Jesus in the Qur’an, Muhammad in the Bible.”

The ad campaign is sponsored by a Muslim group called GainPeace. Sabeel Ahmed, the executive director, claims that “our main purpose is to build bridges, and to erase misconceptions.”

But the ad itself is misleading. I can’t claim to remember every name in the Bible, but I’m fairly sure that the name “Muhammad” is not among them. It’s true, of course, that someone named “Jesus” does make occasional appearances in the Koran. And because Muhammad borrows from Luke’s nativity story, it looks at first as though it might be the same Jesus. But after we find out that Jesus was born of a virgin named Mary, the narrative—if you could call it that–departs radically from the Bible story. Almost everything else spoken by the Muslim Jesus or spoken about him is a subversion of the Christian message.

One last point. Sabeel Ahmed reports that “Jesus is mentioned with love and respect and honor more than 25 times in the Qur’an.” Twenty-five sounds about right, but in most of those mentions, Jesus’s name simply appears in a list of other Muslim prophets who endorse Muhammad’s message. If you’re simply looking for the name “Jesus,” you’ll find it in the Koran, but if you’re looking for a flesh and blood person like the Jesus Christians know, you’ll be sorely disappointed.

Unfortunately, this numbers game is effective with some Christians—particularly with those who have not read the Koran. In defense of the thesis that Islam and Christianity share much in common, a priest once pointed out to me that Mary is mentioned in the Koran 32 times. He seemed to think that that was a decisive argument. But, of course, it’s not. And if confusion about the faith continues to rise among Catholics, it’s a good bet that Muslims will ramp up their proselytizing efforts.  Catholics who hope to defend their faith will need to better inform themselves about Islam, and not let themselves be misled by word games and number games.

The article above originally appeared in the January 22, 2020 edition of LifeSite News. A new introduction has been added to the original.

William Kilpatrick is the author of What Catholics Need to Know about Islam and other books about culture and religion. His work is supported in part by the Shillman Foundation. For more of his recent articles, visit his website, turningpointproject.com

The Top Five Lies About Islam You Probably Learned in Church