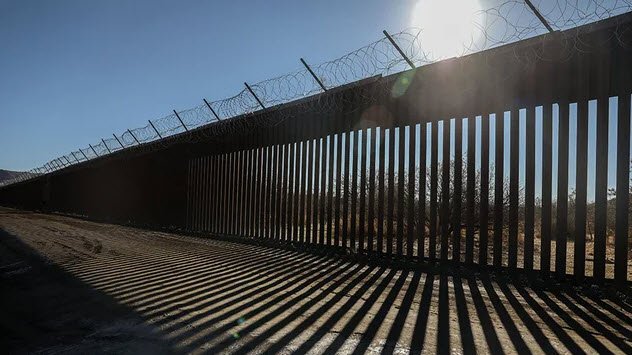 Joe Biden has triggered a massive border surge, with the latest stats showing 100,000 detentions in last month alone. Count the people who escaped detention, as much as 80% of them, according to this 2019 exploration of the issue from leftist Politifact, and the total is much, much, higher.

What’s old Joe who created this mess with his many invitations to illegals to come on in to do? Instead of warning of deportations, or vowing to yank amnesty, or promising new fences, or warning of prison, or something, his cowardly solution is to deny it.

Anybody notice that suddenly, there are no news pictures? No kids in cages, no human squalor, such as leaked out during the Obama administration, when Obama triggered a surge.

The Border Patrol, meanwhile, reports that it’s under gag orders from the White House. According to The Hill.

NBC reported that Border Patrol staff have been told to refer all media requests, even those from local outlets, to Customs and Border Protection (CBP) staffers in Washington and to deny all “ride-along” requests. The network attributed the information to officials who asked to remain anonymous.

NBC News had itself requested and was denied access to “overcrowded border processing facilities holding unaccompanied migrant children” according to its report.

No facility inspections, no interviews, no ridealongs for reporters? Every request for information to be processed with the bureaucrats in Washington, who are undoubtedly going to be too busy?

Here’s Jen Psaki, Biden’s spokeswoman, telling everyone to ask the Border Patrol for whatever they want to know.

Q    Is the White House or DHS instructing Border agents to refuse ride-along requests from reporters?  Because that’s what a lot of our folks on the ground are hearing.

MS. PSAKI:  Again, I think we’ve seen, watching a number of the reports you all do, a number of Border Patrol officials who are quoted in them, who appear in them.  And certainly from the White House, we support that.  It’s coordinated through the Department of Homeland Security, and I’d point you to them for any additional questions about the logistics of press access.

Q    But, I mean, our reporters used to be able to get ride-alongs during the Trump administration —

Q    — and you all came in and promised to be the most truthful and transparent administration.  And you all, you know, oversee the Department of Homeland Security.  So if you all wanted to grant access to the press, couldn’t you just tell DHS to do it?

MS. PSAKI:  Again, we fully support transparency, and I would encourage you to talk to the Department of Homeland Security about any requests you have for press access or what you’re looking to accomplish at the border.

And the Border Patrol, of course, will bounce the requests back to Washington. See how this works?

Meanwhile, Biden says he has ‘no plans‘ to review his self-created disaster at the border. Out of sight, out of mind.

Sure as heck sounds like someone is covering something up. And it’s likely to make the media, which prefers to fawn if it can, actually much curiouser.

The gag action is definitely an outrage, a cover-up, a stupid action by an incompetent administration sure to make the surge come harder. Cartels and human smugglers are watching this of course, and can note that with Joe Biden providing a news blackout for them, they can surge in migrants, and drugs, harder. Nobody’s going to know, except them, who are busy counting the cash.

The press is torn between fawning over Joe and reporting news, particularly with cable ratings down. With a bona fide surge, and high ratings in the offing, as well as the likelihood of leaks going to competitors, you can bet the media is not going to let up. Someone is going to leak those pictures of mass migration and squalor, photos of gang tats en masse, and single moms with kids, demanding diapers, and it’s all going to come out.

But President Transparency is going to do all he can to suppress the news in the meantime. In a way, it’s to be expected.

Doddering old Joe is sort of an echo of Leonid Brezhnev, the Soviet leader who presided over the Soviet decline before its 1990 collapse. A story that went around in the waning days of the Soviet regime, was that the great train of Sovietism was crossing the trans-Siberian railroad, and somewhere in Siberia, it broke down. When Lenin was in charge, he ordered the Soviets to get out of the train and push. The train carried on and as in any communist system, broke down again. This time Stalin was in charge. He ordered guards to shoot half the passengers and tell the other half they’ll be next if they don’t get out and push. The third time the train broke down, Nikita Khruschchev was in charge, and saboteurs had destroyed the tracks. He ordered the passengers to get out of the train and take the tracks from the back and put them in the front. The train carried on and broke down again, this time with Brezhnev in charge.  Brezhnev was old and doddering like Joe, and ordered the passengers to pull down the shades and start bouncing up and down, to imitate the train motion.