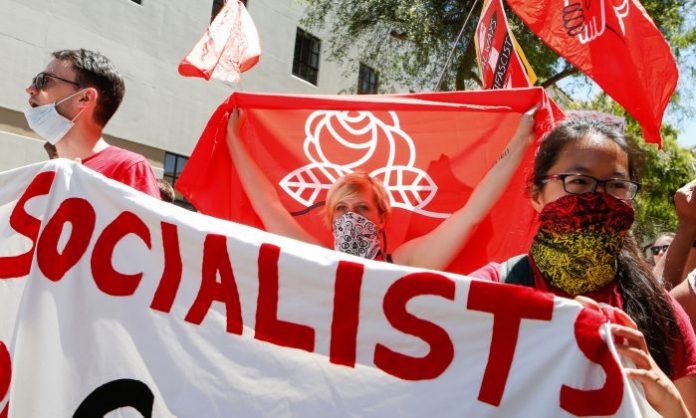 Marxists from Democratic Socialists of America (DSA) have captured the chairmanship and every key executive position in the Nevada Democratic Party.

Despite its protests to the contrary, the DSA is a communist organization. The organization is formally aligned with Communist Party USA, Liberation Road, and the Committees of Correspondence for Democracy and Socialism—all of which work closely with the Chinese Communist Party against the interests of the United States.

The DSA took control of the Nevada Democrats through a five-member “Progressive Slate.”

Late in the day, moderate Democrats organized a counterslate to stand against the “Progressive Slate.”

Longtime Democratic functionary Tick Segerblom was encouraged by party moderates to stand for the chairmanship against Whitmer. Ironically, Segerblom, too, is a DSA comrade—albeit one with deeper Democratic Party roots than his opponent.

“And no matter who wins today, the next chair of NV Dems will be a DSA member, and we will continue to push the party to truly represent working people.”

Whitmer beat Segerblom by a comfortable 248 votes to 216.

When the dust had settled, the DSA/Progressive Slate had won all five positions.

The DSA’s takeover of the Nevada Democratic Party took a couple of years to achieve. The DSA has had several hundred members in the Las Vegas area since 2017. A smaller Northern Nevada local was founded in Reno in late 2018. There are many at-large members active around the state, and a couple of student chapters.

Total active DSA membership in Nevada would likely be around 500 comrades, yet they have been able to capture the reins of the most powerful political party in the state.

According to Sam Mellins of The Daily Poster:

“Now DSA members and other progressive organizers are using the organizing tactics and power they built during the Bernie 2020 campaign to try to reshape the Nevada Democratic party into a progressive force.”

In July 2020, “progressives” captured nine of 14 contested seats when the Nevada State Democratic Party elected members to at-large positions on the state party’s executive board.

The Clark County Left Caucus, founded by Whitmer and other DSA comrades, as a vehicle for socialist influence in the Democratic Party, claimed credit for the victory. Whitmer told the Pahrump Valley Times:

“Left Caucus is committed to bringing progressive change to Nevada, through utilizing innovative platforms and approaches to bring in new voices to the Democratic Party.

“Progressives are on our way to bringing real change to Nevada. Our model and approach should serve as a key framework for progressives throughout the U.S. looking to make clear changes and policy reforms within the Democratic Party.”

How many grassroots Democrats in Nevada understand that they’re now voting for a Marxist-controlled party?

The DSA also has well over 100 allied public office-holders in positions across the country, from library and flood control board members to judges and district attorneys.

Currently, six DSA comrades serve on the Chicago City Council and a slate of six more are running for New York City Council this year.

The DSA is involved in some type of “Progressive Caucus” or “Left Caucus” inside the Democratic Party in multiple states, including Hawaii, Washington, Montana, Michigan, Iowa, Illinois, Ohio, North Carolina, Florida, Arizona, and California.

In California, the DSA is running well over 120 Marxist comrades through the Progressive Delegates Network for California Democratic Party Assembly District delegate spots at the April party convention.

No doubt the comrades will be backing DSA-friendly Delaine Eastin as she challenges incumbent Rusty Hicks for the California Democratic Party chairmanship.

In two or three election cycles, the DSA and its allies may well control the majority of state Democratic parties in the union.

Are Americans ready for a communist-dominated “mainstream” political party?

Trevor Loudon is an author, filmmaker, and public speaker from New Zealand. For more than 30 years, he has researched radical left, Marxist, and terrorist movements and their covert influence on mainstream politics. He is best known for his book “Enemies Within: Communists, Socialists and Progressives in the U.S. Congress” and his similarly themed documentary film “Enemies Within.” His recently published book is “White House Reds: Communists, Socialists & Security Risks Running for U.S. President, 2020.”