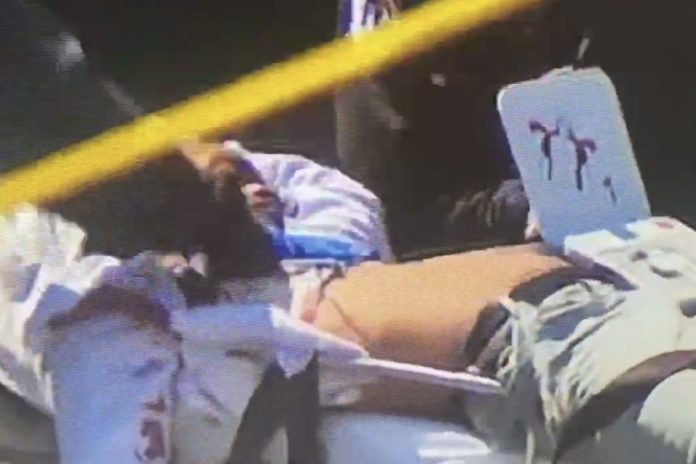 Latest Update: Noah Green, 25 year old black male from Indiana, was a follower of Louis Farrakhan. Farrakhan is the leader of a terrorist organization known as the Nation of Islam, and a black supremacist.

Many with this extremist ideology have a deep rooted hate for Christians and Jews alike. They are no fans of America either. Many attacks in the names of “Allah,” “Nation of Islam,” “ISIS,” “Muslim Brotherhood,” and “Jihad,” can all be connected to the same ideology Louis Farrakhan preaches. He is also known for calling Jews “termites,” “worshippers of Satan,” and says we follow the “Synagogue of Satan.”

This is yet another attack by an American citizen who was radicalized within the U.S borders, at Mosques and Islamic Centers. Public figures like Louis Farrakhan pray on the weak and young turning them into their own Jihadists.

The mainstream media won’t report on this. The police will not call it what it is. Noah Green’s own facebook page proves that this is yet another domestic terror attack by the hands of Radical Islam.

A direct hit on the United States capitol occurred today injuring two officers and the suspect (now dead) who committed a terrorist attack. This Jihadist rammed his car into a barricade, ran out with a knife to attack anyone who was in his way, and was in possession of a gun. The suspect knelt down on the ground, grabbed what was to be believed a gun out of his back pocket, and pointed it at these officers. The officers then shot back. The suspect died at the hospital.

Two Capitol police officers were transported to local hospitals and one of the officers died from his injuries.

As soon as the driver hit the capitol barricade, the mainstream media started calling the suspect “mentally ill,” and “mentally unstable.” These code words are always used to describe radical Muslims who engage in heinous terrorist attacks. They are treated as individual incidents instead of a whole network of fanatic zealots preaching an ideology of hatred of America and American Values.

The attack on the U.S Capitol, today, is no random incident by a mentally unstable “lone wolf,” who wants to “make some noise,” as Fox News stated. A hit on our capitol during two holy holidays for Christians and Jews is no coincidence. A network of radical Islamists are chipping away at a six decade long plan to attack the West. It is time for fellow Americans to wake up to this threat.

Using cars to slam into immovable objects, running out of the car, and attacking those in front of them with a knife is the M.O. of these Islamic extremists. The suspect also had a gun, who is to say they didn’t have a bomb as well? These weapons are used frequently in the name of Jihad. We are making a massive mistake of not combining all the domestic terrorist attacks in America over the last few decades into ONE long attack against us.

Last week, an ISIS member attacked a kosher friendly grocery store in Boulder, Colorado killing 10 white Americans. The Boston marathon bomber, attacked in the name of Jihad. The Orlando Pulse nightclub shooter was linked to this ideology as well.

THIS IS A DEVELOPING STORY THAT ILLOOMINATE MEDIA WILL BE FOLLOWING CLOSELY!

Update: Yogananda D. Pittman chief of U.S. Capitol police said the suspect was not known to them. When asked if this was a terrorist attack, she denied the allegations. The suspect was carrying a machete.

According to Ted Williams, former D.C homicide detective, the suspect was most likely at the check point to verify i.d and when they didn’t accept him he ran into the barricade.

Suspect is now known as Noah Green from Indiana, originally from Virginia. He was a proud member of the Nation of Islam and a Lous Farrakhan follower.