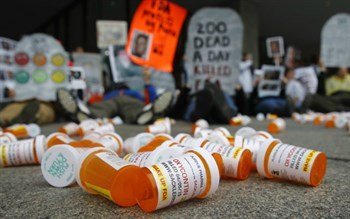 A 400% increase in the number of encounters at the U.S.-Mexico border between 2020 and 2021 should signal a crisis. But the Biden administration continues to ignore the obvious – and Mexican drug cartels are reaping great benefits.

Fox News reported on Thursday that according to new data from Customs and Border Protection (CBP), the total weight of fentanyl seized at the border in the first three months of 2021 amounted to a 233% increase from the same period one year ago. The deadly synthetic opioid is considered to be 50-100 times more powerful than morphine and kills tens of thousands of Americans each year – facts emphasized by Congressman Kevin McCarthy (R-California), the House minority leader.

“The Biden administration,” he told Fox News, “cannot continue to ignore the crisis they created – if they fail to take action now, it will leave us with a far more dire situation in the future.”

One News Now spoke to a former head of the Special Operations Division (SOD) of the Drug Enforcement Administration (DEA) about the current debacle at the border and its effect on the proliferation of drugs in the United States. Derek Maltz says not only are cartels making vast amounts of money through migrant smuggling, but they’re using migrants to create opportunities to bolster the drug trade in America.

“[The cartels] are using [some of the] migrants to increase the amount of cartel membership throughout the United States to continue to set up and further advance their day-to-day operations [on American soil],” he states.

Maltz contends that while Border Patrol agents are overwhelmed by the plight of migrants – especially children – at the border, cartels are actively sending their supporters to areas where the Border Patrol isn’t operating with as much focus.

“Border Patrol is transitioning from border security to babysitting,” Maltz describes. “Essentially, what’s happening is that Border Patrol is being distracted and taken away from their day-to-day job of security.”

The former DEA executive discloses a fact he considers many are not talking about and is not well-reported – specifically, that approximately 38,000 “got-aways” entered the country in the month of March alone.

“Got-aways,” he explains, “are migrants or aliens [crossing into the U.S.] who Border Patrol may see on the fences or on video; they physically have an eye on them, but are not able to put handcuffs on them.”

The number of “got-aways” is surpassing 1,000 per day, Maltz emphasizes. “That’s something no one is really talking about,” he adds.

Not only are some of the people who are entering the country potentially terrorists, Maltz also notes cartel operatives are surely among the group. And this, he says, is just one of the reasons fentanyl is “exploding” in America. “People are dying from fentanyl that’s coming from China and Mexico,” he shares.

With precursor chemicals coming from China, he says, Mexican cartels are starting to make their own fentanyl in very sophisticated production labs.

“[America] is seeing a lot of fentanyl mixed in with counterfeit pills,” he tells One News Now.

In a frightening comment, he says DEA lab analysis indicates that “many of the counterfeit pills – up to 26% – actually contain a lethal dose [of fentanyl].” Drugs like oxycodone, Xanax, and Adderall are being laced with fentanyl, according to the former DEA exec.

According to Maltz, DEA Phoenix estimated up to six million counterfeit oxycodone pills entered the city in 2020. “With 6 million pills in circulation, that means 1.5 million people [25%] could be killed,” he laments.

And while it may be coincidence, Maltz points out drug overdoses in America are at an all-time high. “Because of COVID, social isolation, and mental illness, the American population is popping more and more pills – and the number of overdose deaths will continue to increase,” he predicts.

He has become intimately aware of hundreds of drug-related deaths by following a public awareness group known as Lost Voices of Fentanyl. “Families are devastated, [and] they’re also very upset with the lack of support by government agencies, national organizations, and politicians,” the former DEA exec shares.

The drug crisis doesn’t affect any one class or group in America, he admits. “It’s not something that only impacts Republicans or Democrats, [but] it’s impacting all walks of life,” Maltz describes. “[Families that are grieved and frustrated] don’t understand why no one is talking about the issue, and why they don’t hear about it at all with the current administration.”

Maltz continues: “The problem is that no one wants to open up the dialogue about the number of deaths – because if they did, they’d also have to report about the border issue.” He notes a correlation between increasing death rates and escalating numbers of migrants crossing the border.

Last month, U.S. Customs and Border Protection recorded more than 172,000 encounters at the border. In March of 2020 – when President Donald Trump was in office – there were only 34,000.

“That’s over a 400% increase in apprehensions at the border – [and] all the while,” Maltz notes, “the current president and vice president refuse to admit there is a crisis at the border.”