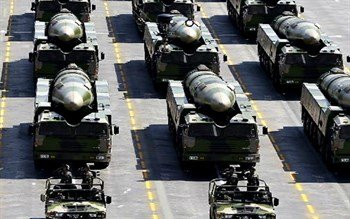 An expert on the Middle East says Iran’s deceptive practices and disregard for human life affirm the Islamic regime remains a threat to its enemies – and that President Joe Biden’s lack of will could have dangerous repercussions for anyone who gets in their way.

Former President Donald Trump left a mark on Iran’s economy that continues to affect the Islamic regime. While economic sanctions against Iran have clearly taken their toll on the nuclear activities of the Middle Eastern country, other presidents have also played a role in the state of its economy today.

One News Now spoke to Patrick Clawson, Ph.D. about the present impact of U.S. sanctions on Iran. The director of research for Near East policy at the Washington Institute considers the current state of affairs in Iran to be somewhat ironic in terms of U.S. involvement.

“The irony is that before Trump, Obama and the Bush administration also had Treasury departments which vigorously enforced U.S. sanctions that had a dramatic impact on Iran,” he explains, adding that all Trump did was “extend the sanctions to a variety of other sectors in the Iranian economy.”

However, Clawson notes that key financial sanctions predate back to the George W. Bush administration, which he says “started implementing the sanctions with vigor, imposing multimillion-dollar fines on banks that were trying to skirt around sanctions.” And according to the member of Middle East Quarterly‘s board of editors, former President Barack Obama largely maintained the same measures.

Iranians have continued to use various deceptive practices to try to get around the sanctions, Clawson points out. “And that means if [the U.S. wants] to maintain the same impact, [it has to] constantly designate new Iranian entities that have been created in order to avoid the existing sanctions,” he explains further.

In addition, Clawson says, Iranians have persistently attempted to channel trade through organizations and industries that have not yet been sanctioned. “[But] the Trump administration was quite vigorous about pursuing all of the new avenues that the Iranians were using in order to evade the sanctions,” he states.

Clawson admits President Joe Biden doesn’t appear to “care” very much about the Middle East, or Iran in particular. “[The president] is quite comfortable with the current situation [and] is not particularly interested in getting into a fight with Congress or U.S. allies in the Middle East like Saudi Arabia, the United Arab Emirates, and Israel,” he adds.

He expects that “comfort” level to persist for a while – but warns complete apathy toward the deceptive practices of the Iranian regime could come at a cost. Even as the Biden administration appears slow to return to the 2015 Joint Comprehensive Plan of Action (JCPOA) and Iran continues to ignore the current measures to ensure safety and transparency, a heightened risk of nuclear activity from Iran isn’t the only threat emanating from the regime.

For example, Clawson describes the “shockingly effective attack” in 2019 by drones on one of the most important oil installations in the world. The Iranians perpetrated the attack against a “gigantic” oil facility in Saudi Arabia with “stunning accuracy,” he describes – adding that that’s worrisome to the Israelis.

“What [this strike] shows is that Iran can do a heck of a lot of damage with missiles and drones,” he adds. “Precision-guided missiles and drones can be used to hit vital Israeli installations; and in many ways, [these types of attacks] could give Iran the capability of inflicting damage on other countries, as well.”

Clawson argues such missile and drone attacks could have the same devastating impact as nuclear weapons, but without the large number of civilian casualties, which he explains Iran doesn’t particularly want to cause to another nation.

However, the Institute’s director of research suggests the 2019 protests about gasoline price increases shows the world that the Iranian regime may not be entirely restrained from engaging in mass slaughter.

“And what became clear afterwards is that Iran’s Supreme Leader Ayatollah Ali Khamenei [will not hesitate] to kill in order to stay in power when the regime is in danger,” Clawson concludes.