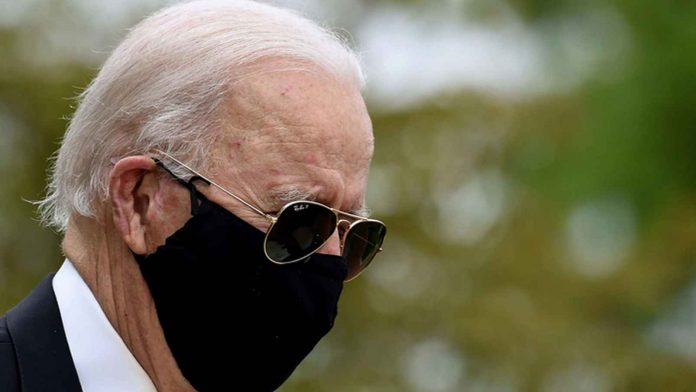 Tyranny begins with the destruction of meaning.

Joe Biden is always redefining things by Bidenizing them into random strings of gibberish like “lying, dog-faced pony soldier” or turning them into Bidenisms.

But these days his administration is ambitiously trying to redefine the entire English language.

“I want to change the paradigm,” Biden told reporters. “I would like elected Republican support, but what I know I have now is I have electoral support from Republican voters. Republican voters agree with what I’m doing.”

Like every other word that comes out of Biden’s mouth, that’s a lie. A Gallup poll in March found that Biden’s approval rating among Republicans is at 8%. That’s down from 12% in February.

“What’s become crystal clear is that Biden has redefined bipartisan,” Obama crony Rahm Emanuel argued. “And Washington is slow to catch up to the Biden definition.”

The Biden definition of bipartisan is having the support of 8% of Republicans.

Not only is Washington D.C. slow to catch up to the Biden definition of bipartisan, but so is the dictionary. Biden’s advisers however argue that the dictionary’s arc bends toward Biden.

“If you looked up ‘bipartisan’ in the dictionary, I think it would say support from Republicans and Democrats,” Anita Dunn, who has advised Biden and Harvey Weinstein, argued. “It doesn’t say the Republicans have to be in Congress.”

It doesn’t say that the Democrats have to be in congress either if it’s a book club. But if it’s bipartisan governing, then it has to be Republican and Democrat elected officials.

“The Biden definition of bipartisanship is an agenda that unifies the country and appeals across the political spectrum,” Mike Donilon, a senior Biden adviser, argued. “Presumably, if you have an agenda that is broadly popular with Democrats and Republicans across the country, then you should have elected representatives reflecting that.”

The Framers also thought so which is why they put into place a system of elected officials chosen by the people to represent them. Biden would like to replace that with claiming that Republicans support him in a poll so he can eliminate the filibuster, pack the Supreme Court, add Puerto Rico, D.C., and his family home as states, and rule a one-party state.

“I mean, what is infrastructure? Historically, it’s been: What makes the economy move,” Secretary of Energy Jennifer Granholm, contended.

In the hands of lefty linguists, infrastructure, like the Constitution or bipartisanship, ceases to be tethered to the dictionary or the meanings imbued by a bunch of old white male racists, and becomes a universal concept. Or as Granholm argued, “as the president said this week, that infrastructure evolves to meet the American people’s aspirations.”

Infrastructure, like the living constitution, is constantly evolving to meet lefty aspirations. One day it’s a bridge, another day it’s abortion, and the end of free speech.

“We don’t want to use past definitions of infrastructure, when we are moving into the future,” Granholm whined. Definitions are static. They exist in the past. But the party of progress, as embodied by a 78-year-old man who keeps stumbling over words and falling down, is using definitions from the future for Newspeak dictionaries that haven’t even been invented yet.

If ‘infrastructure’ or ‘bipartisanship’ mean whatever Biden says it does, then he’s an absolute dictator, and reality means whatever lying, dog-faced pony soldier decides it does this week.

But Biden is always redefining things.

The serial Democrat lecher started out, like Bill Clinton, by redefining sex. Except that Biden, in one of his first executive orders, redefined sex to mean some intangible psychologically subjective concept of sex not based on science or biology, rather than men and women.

Once you’ve redefined women out of existence, redefining bipartisan to mean a one-party state, and infrastructure to mean social services is easy. All it takes is the refusal to be bound by the narrow categories of the past and then bridges, gender, and tyranny can be surprisingly fluid.

Last year, Biden had already redefined being a Catholic.

“Biden Could Redefine What It Means to be ‘a Catholic in Good Standing,” the Washington Post argued. Predictably, the argument was all about a more fluid definition of Catholicism and “what kinds of Catholicism they think most urgently needs to be advanced”. The Biden brand involves “poverty, refugees and the environment” which has as much to do with Catholicism as Tikkun Olam’s emphasis on “poverty, refugees, and the environment” has to do with Judaism.

But when you’re already redefining the Constitution, gender, and the meaning of simple words, why not also redefine religion away from narrow categories of belief, and into an evolving religion of the future in which things mean whatever we want them to mean at any moment.

When words mean nothing, then ideas mean nothing, and it’s easy to redefine Catholicism and Judaism to mean Muslim immigration, Obamaphones, and subsidies for luxury ‘green’ SUVs.

As George Orwell rightly noted, the refusal to allow words to mean anything is tyranny.

Without objective meanings, there are no laws and therefore no rights. There are no restraints on the power of the state when it refuses to be bound by the mere definitions of words.

Democrats spent generations trying to nullify the Second Amendment of the Bill of Rights by arguing about the meaning of “arms”. Now they’re trying to do the same thing to the First Amendment by putting forward exciting new definitions of “speech” and the “press”.

Recent mainstream media editorials attacking free speech include “Why Is Big Tech Policing Free Speech? Because the Government Isn’t”, “Free Speech is Killing Us” and “Why America Needs a Hate Speech Law.”

That last one was written by a Biden transition official, who sneered that, “the intellectual underpinning of the First Amendment was engineered for a simpler era” and that, “the framers believed that this marketplace was necessary” from which “magically, truth would emerge.” An important prerequisite for the emergence of truth is the magic of allowing people to speak and for words to mean something. When there’s no free speech or meaningful speech, truth dies.

In our exciting leftist future, we know that speech, like gender, infrastructure, and bipartisanship, have to be redefined to mean whatever the government has decided that it should mean.

The truth can only emerge from the government and its political media partners.

And if you doubt that, you probably believe that infrastructure means roads, that women exist, that free speech means the freedom to speak, rather than being told what you can say.

Bad speech “undermines the values that the First Amendment was designed to protect: fairness, due process, equality before the law,” the Biden transition official argued.

The only way to save the true values of the First Amendment is to destroy its literal meaning.

This is the same argument that you will find behind every Biden redefinition which insists on a definition so inclusive that it includes everything except what it actually means.

And bipartisanship means everything except elected officials from two parties working together.

America also needs to be redefined from a country and a people to an idea that includes the entire world and everything in it, except its own citizens and a country with borders.

When America, like religion and words, means everything then it means nothing.

And who better than Joe Biden, who redefines sentences into incomprehensible word salads randomly assembled from a Scrabble session, to usher in the end of the English language.