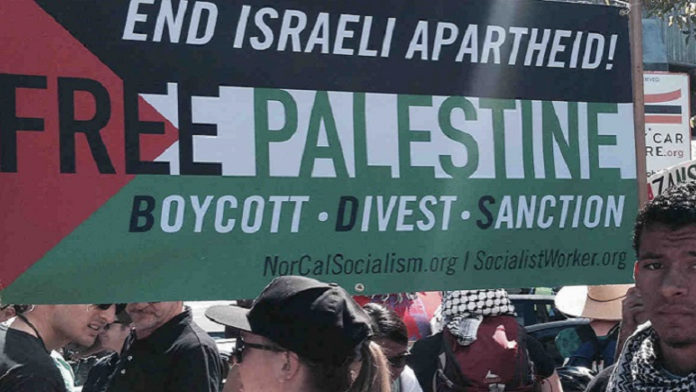 A “progressive” Jewish voice advances the agenda against Israel.

J-Space is known as a “respectable,” “Progressive” Jewish voice in Canada. It is more or less the counterpart to J-Street in America. Several days ago, the New Democratic Party (NDP) in Canada passed an anti-Israel, BDS-supporting Resolution, 04-10-20 (Justice and Peace in Israel-Palestine), at its 2021 Convention. J-Space supported it. See its official statement HERE.

A little background about the NDP for Americans who may be unfamiliar with it: the NDP is a far-Left, Progressive Party, with now only 24 out of 338 seats in the House of Commons. The NDP actually served as Canada’s official opposition party from 2011 to 2015, but its support has dwindled. It is worthwhile to note that the NDP also founded an “unofficial” New Democratic Party Socialist Caucus in 1998.

Last year, NDP leader Jagmeet Singh stated that his party does not support BDS, as reported by the Canadian Jewish News:

He unequivocally condemned BDS, stating that it “creates tensions and divisions,” and “does not advance peace.” Singh stated that neither he nor the NDP support BDS, believing that it is not “the right path forward.”

Singh is regarded with distaste in many circles. He ostensibly supports Sikh separatism and was banned from India for insulting its human rights record and accusing it of genocide. But despite his condemnation of BDS a year ago, to an astute observer, his declarations were suspicious, given his party’s prior ambivalence about BDS. But now, Singh has taken the gloves off to  expose his real views of Israel. The new resolution just passed by the NDP states:

…Therefore BE IT RESOLVED THAT the NDP actively campaign in support of the demand of Palestinian unions, civil society and unions across Canada and around the world for Boycott, Divestment and Sanctions against the Israeli state…

The full document can be read HERE.

The biggest shock is that J-Space actually backs this resolution. J-Space issued its own statement about the resolution, which included:

As Canadian Jews committed to Israeli-Palestinian peace, we welcome efforts that re-affirm Canada’s long-standing role as a balanced and proactive voice for self-determination and security for both Jews and Palestinians.

At JSpaceCanada, we consider Israel’s settlement enterprise to be a violation of the democratic principles on which it was founded. We believe there is a fundamental distinction between the State of Israel and the Occupied Territories….

By focusing its activism on the Occupied Territories, the resolution sends a message that the status quo is untenable and a liability for long-term peace and security.

Some questions to ponder:

The list of questions goes on. Now Canada waits to see how this NDP BDS resolution, actively supported by J-Space, will advance. One certainty is that the resolution fortifies the anti-Israel position adopted by the Trudeau Liberals at the United Nations. In November 2019, the Liberal government broke with a decade-old tradition of voting to support Israel. Instead, it voted to back a pro-Palestinian UN resolution that explicitly referenced “contested lands between the two countries as ‘Occupied Palestinian Territories.‘”

One would think the answer to all the questions above should be obvious. What isn’t so obvious is this: why would J-Space support BDS against the State of Israel, particularly given that it is a Jewish organization, especially at this particular time of instability in Israel after yet another cliffhanger election? Many (including myself) do not see valid answers, given the history of jihad against Israel, and against the Jews in particular (as well as the jihad against Christians in the entire region and beyond). “Human rights,” they say?  Nonsense.

So given J-Space’s stance on Israel being an “occupying” power that is causing undue hardship for the Palestinian people, does J-Space then agree to the International Criminal Court’s decision to investigate Israel for “war crimes”?

The Center for Canadian Jewish Affairs’ president and CEO, Shimon Fogel, issued the following statement about the NDP’s resolution:

The NDP’s adoption of resolution 04-10-20 Justice and Peace in Israel-Palestine highlights a toxic obsession with Israel to the serious detriment of the party. It is staggering that, given the state of the world and the consequential issues before us, including the pandemic, the NDP placed this resolution and one other targeting the Jewish community on the list of top Foreign Policy concerns. In doing this, the NDP ignored catastrophes unfolding in Syria, Ethiopia, Myanmar, Brazil, Hong Kong, and elsewhere around the world. That is shameful.

In order to make a constructive contribution to the complex discussion about peace between Israelis and Palestinians, the NDP must forego its pathological preoccupation with Israel, recognize there are two parties to the conflict, and stop infantilizing the Palestinians. This unbalanced and obsessive concern with Israel renders the NDP irrelevant on this subject and interferes with the party’s ability to address issues that should be core to the progressive agenda.

The NDP resolution is concerning enough on its own, but support from J-Space, along with the previous lies told by Jagmeet Singh (that he unequivocally does not support BDS) is worrying.

Another related issue is a current drive underway to display a “Nakba” exhibit in the Canadian Museum for Human Rights, located in Winnipeg, a museum that was initially intended to be a Holocaust Museum. As the Jewish publication THEJ.CA states in its article Debunking the Nakba Narrative: the “Canadian Museum for Human Rights consideration of a Nakba exhibit ‘is a good example of Western ignorance.’” The thinking that the Palestinians want peace with Israel, given the irrefutable facts of history, is another example of that ignorance.