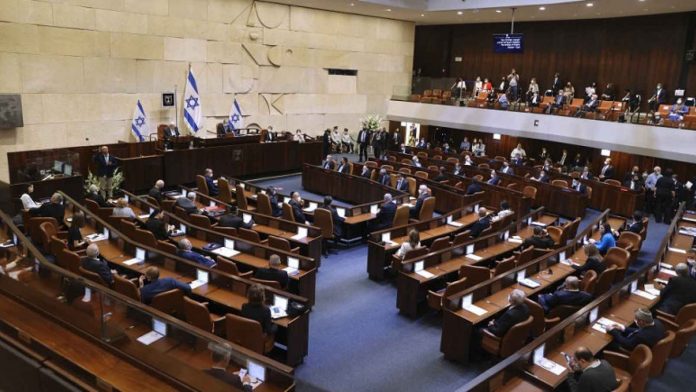 And the dire implications for Israel.

In a discussion with associates on Tuesday, Yamina chairman Naftali Bennett spoke candidly about his political plans, which, according to media reports, he is closely coordinating with New Hope party leader Gideon Sa’ar. Both Bennett and Sa’ar hail from the ideological right and both are outspoken opponents of Prime Minister Benjamin Netanyahu and seek to unseat him as premier.

Sa’ar has tried twice to oust Netanyahu in elections—first in the Likud’s internal leadership race and then as head of his new party in the last election. Both of his electoral bids flopped. Despite massive media support both times, the voters wouldn’t go along.

Although Bennett told his associates on Tuesday that “we’re in” if Netanyahu manages to find two more lawmakers to join a government under his leadership, he is convinced Netanyahu will fail. “It’s wishful thinking” that any members of Sa’ar’s party will return to Likud, he said. “It won’t happen.”

Netanyahu’s mandate to form a government is good for 28 days. From Bennett’s perspective, the real coalition talks will only begin after Netanyahu fails.

At that point, he asserted confidently, “Someone else in Likud will be the prime minister.”

Israel Katz, Nir Barkat or Naftali Bennett are all possible candidates to replace Netanyahu, in Bennett’s view. Each of them will be able to form a coalition because Sa’ar will join them—and he won’t join Netanyahu.

In other words, Sa’ar’s plan, which Bennett has joined, is to do to Likud members what late Prime Minister Ariel Sharon did to Likud voters in 2004.

In December 2003, Sharon made a 180-degree ideological shift. Earlier that year, Sharon won a landslide electoral victory by opposing Labor Party leader Amram Mitzna’s plan to unilaterally withdraw from the Gaza Strip. Sharon famously said, “The fate of Tel Aviv is the fate of Netzarim,” which at the time was a frontline Israeli community in Gaza.

In December 2003, Sharon stunned the country by announcing he intended to implement Mitzna’s strategically reckless platform. And in 2004 he held a referendum among Likud members, seeking their support for his about-face. Likud members rejected his plan overwhelmingly, but rather than stick his plan in a drawer and forget about it, Sharon threw his voters under the bus and ran over them.

Bennett and Sa’ar, with 13 Knesset seats between them, expect that 30 Likud lawmakers will ignore their voters and work with Bennet and Sa’ar to oust Netanyahu. Bennett promises that such a move will bring the support that Sa’ar is now denying Netanyahu and so enable the formation of an “all-in right-wing government.”

It’s hard to see how their plan is more than wishful thinking.

Sa’ar is not a hot political commodity after his “new governing party” flopped at the polls. The Likud base is unstintingly pro-Netanyahu. Likud heavyweights like Katz, Barkat and Yuli Edelstein didn’t try to oust Netanyahu after the November 2019 elections, when the right-wing bloc won just 55 seats. Why would they render themselves persona non grata with their voters to cooperate with Bennett and Sa’ar?

Dubiousness aside, this is the play that Bennett and Sa’ar are running. And they are doing so in conjunction with Rivlin, who showed his hand when he said this week that if Netanyahu fails to form a government, he will consider transferring the mandate to the Knesset. Such a move would clear the way for a lawmaker who is not the head of a party to form a government.

Since this is the game being played, it is important to consider what will happen to the country if they win. Had either Bennett or Sa’ar managed to convince the public to support them instead of Netanyahu, that would be one thing. But they failed. Their plan involves gaining through parliamentary maneuvers and backroom deals what the voters denied them. And if it goes through, it will have profound impacts on both Israeli politics and Israel’s social fabric.

When Likud voters and their fellow right-wingers realized Sharon intended to use his legal—but morally compromised—power to push through his plans to expel 10,000 Israelis from their homes and transfer their land to Israel’s enemies, despite his loss in the referendum that he had called and committed to abiding by, they lost faith in the political system and in the game of democracy itself. And they were right.

Democracy only works when everyone agrees on the rules and follows them. The basic bargain is that everyone accepts the possibility that they will lose elections and power because they know that if they get the votes, they will win elections and achieve the power to govern their way. Democracy cannot long survive if a significant portion of the public believes the game is rigged against them.

The overwhelming majority of Likud voters are fervent Netanyahu supporters. So are the vast majority of voters for the Likud’s sister parties in the Right-Religious bloc he leads.

His supporters have sensed for generations that the elite classes in politics, the legal fraternity, the media and academia hold them in contempt and seek to push them out of the public sphere. If Bennett and Sa’ar, both of whom have elitist political pedigrees, succeed in ousting Netanyahu through legal but non-electoral means, Netanyahu’s supporters will view their action as proof that the elites are out to get them. This conviction will be disastrous for Israel’s national solidarity and sense of shared national purpose.

The dangers of this loss of solidarity will be felt in short order due to the political reality that the plan’s implementation will induce.

Sharon was a popular prime minister when he founded his new Kadima Party. But despite his popularity, Sharon was only able to convince a third of the Likud’s Knesset faction to leave the party with him.

There is little chance that Bennett and Sa’ar with their 13 seats will be more successful than Sharon was. Their best-case scenario would repeat Sharon’s accomplishment, in which case 10 of Likud’s 30 lawmakers would join them in their bid to oust Netanyahu without winning over his voters.

This brings us to the prospects of forming Bennett’s “all-in right-wing government” without Netanyahu. Their bloc of 23 lawmakers (with the 10 Likud deserters) can grow to a maximum 30 lawmakers. The two prospective pick-ups, the anti-religious Yisrael Beiteinu party and the Haredi United Torah Judaism Party, will not sit under the same governmental roof. Both have seven seats. These 30 right-leaning lawmakers will then turn to the left to form a government. Their most likely partners are Yesh Atid, Blue and White and Labor, which together command 32 seats.

In other words, Bennett’s “all-in right-wing government” will have a leftist majority. And if UTJ stays out, the government will also have an overwhelmingly anti-religious majority.

In his conversation with associates Tuesday, Bennett insisted that his willingness to break ranks and form a government with the left is morally justified because Netanyahu has formed governments with the left.

But there is a difference. Netanyahu had no government without Nissenkorn. And if he had refused to form a government with Blue and White, the center-left party was poised to use its parliamentary majority, built on an alliance with the anti-Zionist Joint Arab List, to pass a far-Left legislative agenda that would have altered Israel’s constitutional structure.

All Sa’ar and Bennett need to do to form an “all-in right-wing government” today is join Netanyahu’s coalition. If Bennett is committed to such a government, he can devote his energies to convincing two members of Sa’ar’s faction to join a Netanyahu-led government. He is the politician in the best position to bring them on board.

At the end of the day, there are only three possible political outcomes from last month’s elections: Bennett and Sa’ar can agree to form a right-wing government with Netanyahu, in keeping with the wishes of the voters for the right-religious bloc of parties and in keeping with their own ideological convictions. They can form a leftist government in which they serve as a minority faction. Or, Israel can have a fifth election in August.

This then brings us back to the devastation that ousting Netanyahu through parliamentary procedure rather than at the ballot box will wreak on Israel’s national solidarity—and its strategic implications.

After Sharon split Likud and formed Kadima, his successor Ehud Olmert formed a leftist-dominated government that advocated appeasement. Its stance broadcast weakness and so invited aggression. That aggression came from the Bush administration in the form of pressure to make massive concessions to the Palestinians. Olmert collapsed under pressure and offered PLO chief Mahmoud Abbas Jerusalem and the Temple Mount.

It came as well in the form of war from Iran’s Lebanese proxy Hezbollah. Olmert, together with his radical leftist defense minister then-Labor Party leader Amir Peretz and then-foreign minister and fellow Likud deserter Tzipi Livni, demonstrated utter incompetence in leading the nation in war. Their helter-skelter, ill-conceived military operations and self-destructive diplomatic efforts ensured Israel’s failure to defeat Hezbollah and so set Hezbollah on course to take over the Lebanese government two years later.

The Likud voters Olmert and Livni demonized and trampled just the year before did not rally around them during the war and the public’s distrust of its leaders was impossible to set aside even in time of war.

Israel now faces the most hostile U.S. administration in its history. The Biden administration is itself inviting aggression against Israel by empowering Iran, the Palestinians and international organizations in their campaigns against Israel. Our time is one fraught with dangers. A plan to crown a leftist government and undermine national solidarity by ousting Netanyahu without first defeating him will undoubtedly produce disastrous results for the country.