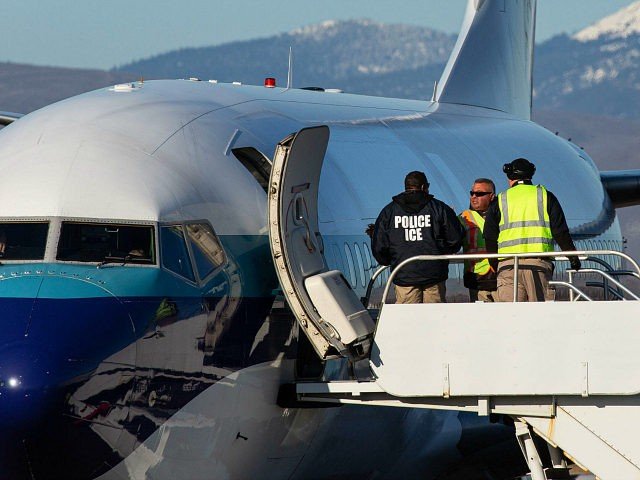 Democrat lawmakers are looking to have President Joe Biden’s administration end a local police program that successfully turns criminal illegal aliens over to the Immigration and Customs Enforcement (ICE) agency for arrest and deportation.

The 287(g) program allows local law enforcement agencies to sign agreements with ICE to seamlessly identify criminal illegal aliens and turn them over to federal agents for arrest and deportation.

Some of the criminal illegal aliens arrested by local police and subsequently turned over to ICE agents included those charged with drug trafficking, child rape, domestic violence, carrying a firearm without a license, aggravated assault, and felony embezzlement.

Booker, Quigley, and Jayapal, though, write that Mayorkas must “immediately terminate all existing 287(g) agreements,” claiming they “undermine public safety and result in the racial profiling and harassing of immigrant communities.”

“We introduced the PROTECT Immigration Act, which would repeal Section 287(g) of the Immigration and Nationality Act once and for all,” the letter continues:

While it will take congressional action to repeal this provision of federal law, we strongly encourage DHS to terminate all existing 287(g) agreements immediately. This would represent a critical step in disentangling federal immigration enforcement from state and local law enforcement and improve the enforcement of our nation’s federal immigration laws. [Emphasis added]

An elimination of 287(g) agreements would mean that law enforcement agencies in 26 states — including the statewide Department of Corrections in Alaska, Arizona, Florida, Georgia, and Massachusetts — would be kicked off the program, making it increasingly difficult to cooperate with ICE.

Already, Biden has gutted a number of interior immigration enforcement operations that are resulting in the release of criminal illegal aliens back into American communities.

With a series of “sanctuary country” orders, Biden is preventing about nine-in-ten deportations that have resulted in a 70 percent drop in the number of criminal illegal aliens in federal custody and an 80 percent reduction in arrests of illegal aliens.