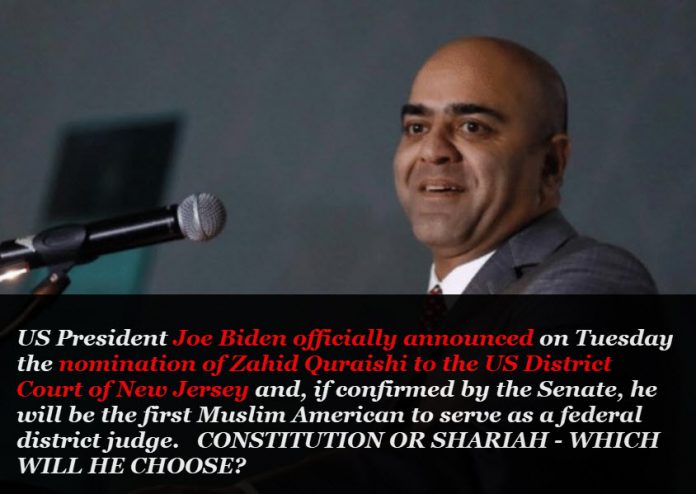 The Senate Judiciary Committee hearing for the first Muslim federal judicial nominee is set for Wednesday April 28th.  Zahid Quraishi, if confirmed, would become a federal judge for the U.S. District of New Jersey.

Given the numerous ways Islamic doctrine conflicts with the U.S. Constitution, Quraishi should be asked the following questions (which have been provided to the Republican members of the Senate Judiciary Committee) at the hearing:

It has been reported you are a Muslim.  While there is no religious test for federal office, the Senate and the American people are entitled to know whether your religious beliefs are compatible or incompatible with U.S. law – law which, if you are confirmed, you will be asked to swear to uphold.  As a preliminary question, do you as a Muslim affirm and adhere to Islamic doctrine from the Quran, hadith, and other authoritative Islamic sources?

Islamic doctrine holds that sharia law should be the supreme law of the land throughout the entire world.  It further holds that sharia law is divine in origin and thus superior to any human-made law, including the U.S. Constitution.  If confirmed, you will be asked to swear an oath you will uphold the U.S. Constitution, which by virtue of its Article VI, is the supreme law of the land.  Do you renounce the portions of Islamic doctrine calling for the supremacy of sharia law and the subjugation of all human-made law to sharia law?

Islamic doctrine holds that jihad is the means by which the supremacy of sharia law is to be achieved.  Do you renounce the portions of Islamic doctrine calling for jihad to achieve sharia supremacy?

What role, if any, should sharia law play in federal cases?  In family law?

According to the words of Allah found in Quran 4:3, Muslim men are allowed, but not required, to be married to up to four wives. Being married to more than one wife in the United States is illegal according to our man-made bigamy laws. Do you agree with Allah that it is legal for a Muslim man in the United States to be married to more than one woman, or do you believe that our man-made laws prohibiting bigamy are true laws and are to be followed instead of this 7th Century command of Allah?

Do you affirm or renounce the following from Islamic sources and scholars:

If confirmed, would you enforce U.S. antiterrorism laws against your fellow Muslims accused of violating those laws (e.g., providing material support for terrorism – 18 U.S. Code § 2339B)?

Are you a member of the Assembly of Muslim Jurists of America (AMJA)?

Do you agree with AMJA that