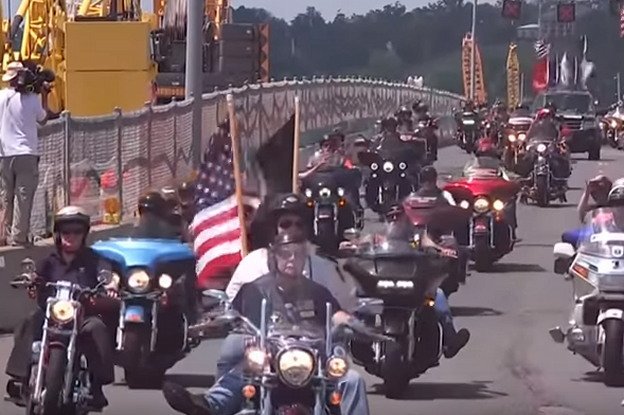 You may remember the veteran biker group known as Rolling Thunder. They have since changed their name to Rolling to Remember.

They were planning to ride into Washington, DC on Memorial Day and end their ride at the Pentagon, as they have done for years.

The Biden administration has decided to deny their permit this year. Shame on them.

The Biden administration denied event permits for the Rolling to Remember motorcycle ride held every year for the past 30 years in Washington, D.C., prompting outrage in Congress.

The charity event, formerly known as Rolling Thunder, is a Memorial Day hallmark in the city, bringing scores of veterans and others to the area to commemorate war veterans, including prisoners of war and those missing in action.

The event was jeopardized at the last moment after the Pentagon declined to issue a permit allowing the group to gather in its parking lot, citing restrictions associated with the ongoing coronavirus pandemic. Biden administration officials “refused to talk with event organizers” and “refused to respond to Congress about this topic,” according to Rep. Darrel Issa (R., Calif.), who was one of several members to petition the Pentagon in April to approve the event.

The Pentagon approved the permit in March and then rescinded the decision this week without any explanation, according to Issa and Rep. Ken Calvert (R., Calif.), who also criticized the Biden administration’s decision.

This group counts a lot of Trump supporters as members. Is that what this is really about?

The Biden Administration is making a terrible mistake by blocking a veterans charity from the use of Pentagon parking for the Rolling to Remember POW/MIA remembrance motorcycle ride. Sadly, the decision seems to be more about politics than safety.https://t.co/rENBxexDRI

“The Pentagon has denied a permit for the annual Rolling to Remember motorcycle ride held in Washington, D.C., on Memorial Day this year.” @KellyRiddell @WashTimesOpEd https://t.co/AQXxBmSbar

With the cancelling of the AMVETS Rolling to Remember Bike Parade permits, this “President” shows once again that he hates America and the VETERANS who fought for it.#BidenMustGo

Denying a permit to these men and women is an absolute disgrace.