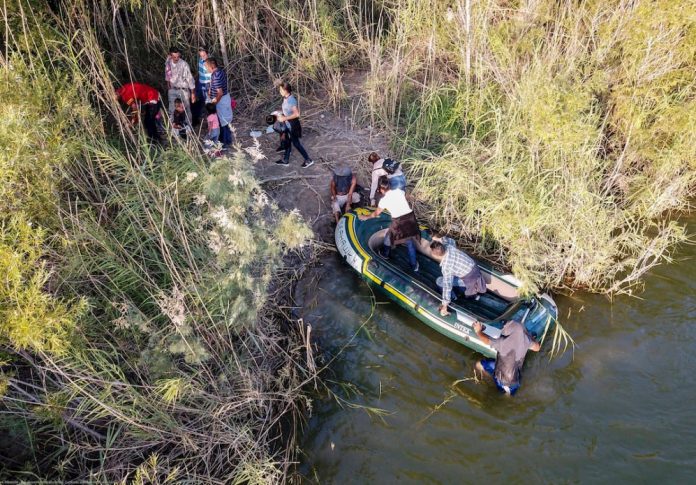 Source: The Federalist, By John Daniel Davidson, May 5, 2021

The Biden administration wants to blame the border crisis on Trump, but the problem is much larger and more complex than that.

The Biden administration would like you to know that, whatever is happening at the border, it’s not Joe Biden’s fault. It’s Donald Trump’s. White House Chief of Staff Ron Klain said Sunday the historic surge of unaccompanied minors in recent months isn’t “because of a speech Joe Biden gave,” but “because of horrible conditions in El Salvador and Guatemala and Honduras.”

Never mind that conditions in those countries have been horrible for at least the last five administrations. The important thing, President Biden said in an interview that aired Friday, is that his administration “has now gotten control” of the situation and that the numbers are “way down now.” They’re not, though, and we’ll all find out just how much higher the April numbers were over March in the coming days.

But the spin that everything is okay on the border is the message that team Biden is desperately trying to project. White House Press Secretary Jen Psaki predictably lied about the border crisis on Tuesday, claiming the current surge of illegal immigration is “something that began during and was exacerbated by the Trump administration.” In fact, the surge began in January, after Biden took office on the heels of a presidential campaign that promised amnesty for illegal immigrants and looser border policies.

It’s true that the number of border apprehensions had been creeping up last fall under the Trump administration, from 71,945 in October 2020 to 78,444 in January, but from January to February apprehensions jumped to more than 100,000, and again from February to March they jumped to more than 172,000 — the highest monthly total since March 2001. Everyone knows why, and anyone can read the data for themselves on the U.S. Customs and Border Protection website, so it’s curious that Psaki would lie so blatantly.

Maybe the White House is betting corporate media will keep giving them a pass on the border, and maybe they will. After all, for the most part the DC press has no problem with illegal immigration and open borders, and has been eager to run interference for the administration since the crisis began — recall, for example, PBS White House reporter Yamiche Alcindor asking Biden if all these migrants are coming now because he’s so “moral” and decent.”

The Border Crisis Is a Cartel Crisis

But there’s another dynamic to the border crisis that at least a few reporters aren’t willing to ignore: the surge of fentanyl coming into the United States from Mexico, the rising chaos in border communities, and the breakdown of anti-cartel operations between the two countries.

The thread that ties all these things together is an aspect of the border little discussed and seldom understood in America: cartels. Mexican drug cartels are smuggling unprecedented amounts of fentanyl into the country at a time drug overdoses are spiking.

They are making billions off industrializing illegal immigration, sending over families and children — all of whom must pay the cartels in order to cross the Rio Grande — to bog down Border Patrol while they smuggle in adults who want to evade detection. They are also now powerful enough to exert significant influence over Mexican officialdom, with the result that joint anti-cartel operations between the United States and Mexico have all but ceased.

The Washington Examiner’s Anna Giaritelli reported Tuesday that fentanyl, a synthetic opioid, is being smuggled through New Mexico and southwest Texas “at rates that federal and local police have never seen before.” According to U.S. Customs and Border Protection, federal agents in this region seized 247 pounds of fentanyl between October 2020 and mid-April, compared to just 36 pounds for all of fiscal 2020.

NEW: One of the most deadly drugs in the world, fentanyl, is being smuggled into the United States from Mexico through Western Texas and New Mexico at rates that federal and local police have never seen before. https://t.co/C4VCXsKUaK #opioidcrisis

Experts estimate the volume of drugs confiscated at the border generally represents maybe 10 or 15 percent of total production. That amount of fentanyl — thousands of pounds — coming over the border has deadly consequences once it reaches U.S. cities and towns. Last year, a record number of Americans (some 90,000, possibly more) died of drug overdose.

The increase in overdose deaths from 2019 to 2020, researchers say, was driven by synthetic opioids like fentanyl. Fatal fentanyl overdoses spiked during the pandemic last spring, claiming more than 6,000 lives in May 2020 alone, and as the year went on they never dropped back down to pre-pandemic levels.

What does this have to do with the cartels? Over the past decade, the cartels have shifted their income streams away from trafficking in marijuana in favor of harder drugs like meth, heroin, and fentanyl. These drugs are easier to transport and smuggle, fetch a higher street price, and in the case of meth and fentanyl, can be manufactured in a lab.

Powerful cartels like Sinaloa and Jalisco New Generation Cartel import raw materials for fentanyl from China or India and produce the finished drug (usually in pill form) in Mexican labs before smuggling it into the United States. Most often they go through ports of entry, hiding the drugs inside commercial vehicles.

But they also routinely use tunnels or move the drugs on foot, between ports of entry, conscripting migrants as drug mules in exchange for access to the border. Using the same infrastructure and distribution routes and networks they developed for marijuana and cocaine, these cartels reach over the border and deep into the U.S. interior.

The cartels control the flow of migrants and drugs into the United States because they control physical territory along the border and throughout much of northern Mexico. No migrant can cross the border now without paying a smuggler, whose price includes a payoff, or tax, for the cartel that controls that region. Often, cartel-associated smugglers will coordinate the crossing of large groups of unaccompanied migrant children and families to tie up Border Patrol while a few miles downriver they move adult migrants or drugs over the border undetected.

The groups of adult migrants being brought across — who, unlike children and families, wish to avoid apprehension and deportation — are in turn a source of conflict and rising tension for border communities in the United States. The Washington Post ran a long article Tuesday chronicling the problem these adult migrants and cartel-associated smugglers are causing in places like South Texas, where rural towns and communities are suffering a spate of high-speed chases, vehicle theft, and break-ins.

“I’ve never really been scared until now,” one 17-year-old girl told the Post. “I should not have to be put in a situation where I can’t leave my house. Normal people out here don’t lock their barns. Now, we do.”

Zooming out from the border itself, the larger geopolitical problem is that the United States and Mexico have all but ceased cooperating in the fight against the cartels. NPR reported Sunday that efforts to target drug cartels in Mexico have unraveled.

“We’re willing to share [intelligence] with our counterparts in Mexico, but they themselves are too afraid to even engage with us because of repercussions from their own government if they get caught working with DEA,” Matthew Donahue, the Drug Enforcement Administration’s deputy chief of operations, told NPR. The cartels, Donahue said, “do not fear any kind of law enforcement … or military inside of Mexico right now.”

Nor is there an appetite among Mexican leaders for cooperation with the United States. A law passed by Mexico late last year removes diplomatic immunity for Drug Enforcement Administration agents inside the country and requires Mexican officials to share any U.S. intelligence about cartels with other Mexican law enforcement agencies, including ones infiltrated by the cartels that U.S. officials don’t trust. The result has been that joint investigations have ground to a halt.

All of this represents the best possible scenario for the cartels. They can continue reaping the benefits of mass illegal immigration, flood the United States with fentanyl, and operate more or less with impunity inside Mexico.

But you won’t hear about any of it from Biden administration officials. No matter what happens on the border, their answer is always the same: it’s Trump’s fault.