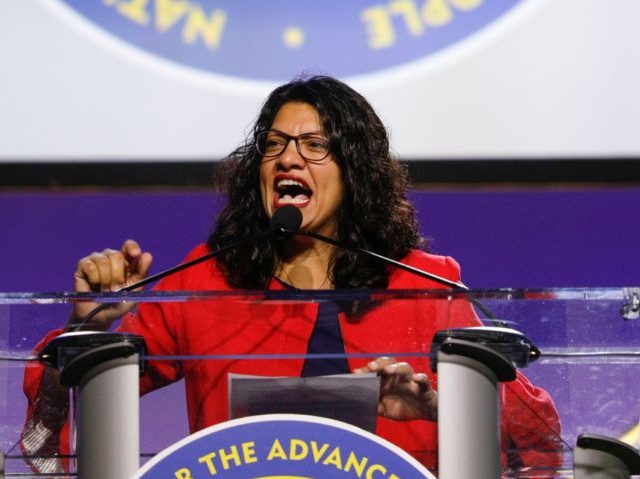 Far-left Democrat Rep. Rashida Tlaib (MI) used part of her time on the House of Representatives’ floor to call for Boycott, Divestment, and Sanctions (BDS) against Israel at the same time the Jewish state was under attack by Palestinian terrorists.

The Democrat said, “[o]ur party leaders have spoken forcefully against BDS calling its proponents antisemitic, despite the same tactics being critically critical to ending the South African apartheid mere decades ago.”

“What we are telling Palestinians fighting apartheid saying is the same thing being told to my black neighbors and Americans throughout who are fighting against police brutality here,” she had continued to say.

The far-left Democrats then said, “[t]here is no form of acceptable resistance to state violence.” Since the message that the elected leaders “is that our military support for Israel is unconditional.”

The anti-Israel rhetoric coming from House Democrats is dangerous and Joe Biden should condemn it immediately.

Tlaib has tried and failed in the past to compare Israel with apartheid South Africa. Breitbart News previously reported in 2019, Tlaib was at a press conference meant to denounce the Israeli government for barring them from entry into the Jewish state. Tlaib had allegedly broken down in tears to bring attention to her mother. Tlaib’s mother “had to go through dehumanizing checkpoints even though she was a United States citizen.” The original report added, Tlaib “did not mention the victims of those Jews and Arabs by Palestinian terrorists who attempt to smuggle weapons and explosives through checkpoints — even, in several cases, inside ambulances.”

Criticism of comparing Israel to apartheid South Africa arose again in 2017, when “left-wing Israeli journalist Benjamin Pogrund, who once covered the anti-apartheid movement from within South Africa, has called [the comparison] ‘cynical and manipulative.’” He wrote in an op-ed at the New York Times: “Those who accuse Israel of apartheid — some even say, ‘worse than apartheid’ — have forgotten what actual apartheid was, or are ignorant, or malevolent.”

Breitbart News’s Joel B. Pollak reported that, “Palestinian terrorists killed two Arab Israelis, a woman in her forties and a seven-year-old girl, in the mixed Jewish and Arab city of Lod, Israel, on Tuesday as a rocket that penetrated the Iron Dome defensive umbrella struck a car and a home.”

Additionally, the Israel Defense Force (IDF) was planning on sending ground troops to “uproot” part of the Palestinian terrorists that fired nearly 2,000 rockets at Israeli civilians over the past several days all across Israel sending, the citizens into bunkers. As of Friday, the IDF has reportedly not “moved its ground forces into Gaza, though ground troops had carried out attacks.”