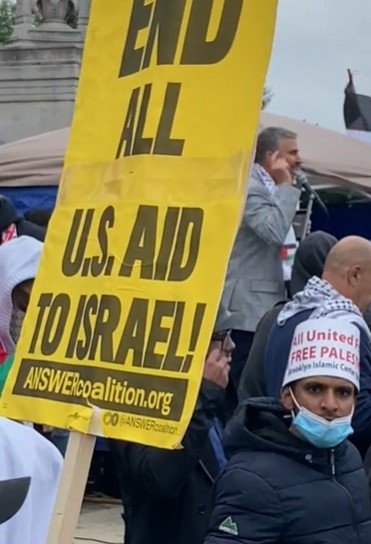 A coalition of activists and politicians, such as the “Squad,” that repeatedly called on authorities to “defund the police” last year is focusing on a new target, Israel. Op-eds or statements with pleas to defund Israel were already documented during the George Floyd riots, mostly by pro-Palestinian activists. Now, they have become mainstream ideology on academic and activist circles, distorting history through biased perspective and catchy slogans. “Defund Israel” mentality is also gaining traction among some Democrats.

This movement calls for the United States to stop its financial and diplomatic support of Israel, which is falsely described as an “apartheid state,” a “Zionist entity,” and an instrument of “colonialist settler violence.” By accepting and promoting these slogans, activists unwittingly endorse the ideas of the Islamist terrorist organization Hamas, which calls for Israel’s elimination in its charter.

On May 19, Democratic Representatives Alexandria Ocasio-Cortez, Mark Pocan, and Rashida Tlaib introduced a House resolution opposing a $735 million arms sale to the Israeli government. The Biden administration approved the sale in early May. The representatives touted endorsements from 70 organizations, mostly anti-Israel, including the Council on American-Islamic Relations (CAIR). CAIR issued its own action alert demanding “a delay in the sale of arms to Israel that would be used to commit further war crimes in Gaza.”

Omar, D.-Minn., issued a statement saying “Israeli airstrikes killing civilians in Gaza is an act of terrorism.” It failed to note Israel was targeting rocket launchers controlled by Hamas and other terrorists that targeted its own civilians. She also accused Israel of “ethnic cleansing” against the Palestinians.

Omar attacked President Biden for “siding with an oppressive occupation” after the White House issued a statement expressing his “unwavering support for Israel’s security and Israel’s legitimate right to defend itself and its people.”

Aid to Israel should be conditioned, she wrote, “and end it altogether if those conditions are not followed. Tlaib does not accept the two-state solution for the Palestinian Issue, causing even the liberal Jewish advocacy group J Street to withdraw its endorsement of her.

U.S. Rep. Cori Bush, D.-Mo., a prominent supporter of the Black Lives Matter movement, equated the struggle for “Palestinian liberation” to the fight for black lives in the United States. “I remember learning that the same equipment that [U.S. police] used to brutalize us is the same equipment that we send to the Israeli military to police and brutalize Palestinians,” Bush said on the House floor and added, “That harassment, that extortion, that brutalization by a heavily armed militarized presence in our community—that’s what we fund when our government sends our tax dollars to the Israeli military.”

But it is not clear whether the push to stall the arms deal will go very far. U.S. Sen. Bernie Sanders, I.-Vt., who endorsed the House resolution, withdrew a matching Senate resolution May 25 after learning the deal already was finalized by the State Department.

“We are committed to giving Israel the means to defend itself, especially when it comes to these indiscriminate rocket attacks against civilians,” said Secretary of State Antony Blinken. “Any country would respond to that, and we are committed to Israel’s defense.” ​

Meanwhile, the Muslim Brotherhood celebrated the anti-Israel statements coming from House Democrats, writing that they “demand the protection of Palestinians from Zionist attacks.”

Anti-Israel bias has stormed academic circles as well. At Rutgers University, 140 faculty members signed a letter condemning what they describe as “Zionist settler colonialism.” The letter repeated the well-known propaganda slogans of “Israeli Apartheid regime,” “Zionist settler colonial expansion,” while expressing support for what is vaguely described as “the Palestinian right to resistance and to self-defense.” The letter does not mention Hamas attacks.

At the University of Colorado, the departments of Women and Gender Studies and Ethnic Studies issued a statement condemning the “settler colonial violence of the Israeli state” and cautioning “against false equivalences between the settler colonial violence of disproportionately powerful militarized states on one hand and colonized peoples on the other.” Again, no mention of Hamas, or the oppression women face from Islamists in Palestinian society.

At the University of Chicago, radically-minded student organizations called for Israel’s elimination. The incoming Undergraduate Student Government (USG), in collaboration with Students for Justice in Palestine, issued a statement invoking the slogan: “From the river to the sea, USG supports a Palestine that is free.”

The Palestine Liberation Organization created the slogan casting a vision for a Palestinian state covering all the land where Israel now exists.

Activists have refocused their attention from internal politics to Israel as well. The Black Lives Matter Global Network Foundation, a radical activist network of Marxist origins, issued a statement saying that it “stands in solidarity with Palestinians. We are a movement committed to ending settler colonialism in all forms and will continue to advocate for Palestinian liberation.” They also used the intentionally vague slogan “Free Palestine” as a hashtag that can be interpreted as equal to the destruction of the state of Israel. The statement by BLM was endorsed in a tweet by the anti-Israel Boycott, Divestment, and Sanctions (“BDS”) National Committee. According to the BDS movement BLM and BDS are “united” through their “struggles against racism, white supremacy and for a just world.” Of course, the BDS movement actually does more to hurt the fragile economic structures of the Palestinians than that of Israel. The BLM leadership has travelled to Palestinian Territories in 2015, its first overseas venture, meeting with Palestinian activists. BLM co-founder Patrisse Cullors rushed to state that Israel ‘is an apartheid state. We can’t deny that and if we do deny it, we are a part of the Zionist violence. There are two different systems here in occupied Palestine.” She repeated her anti-Israel views in 2019 during an Al-Jazeera interview.

These messages attempt to impose the racism and oppressor-oppressed narrative on the Israeli-Palestinian conflict with complete disregard of the geopolitical realities and the region’s history. The same is true for the “colonization” narrative. Dubbing the Jewish population of Israel as “colonizers” equates them with foreign elements, evoking the image of Europeans in Africa. In this context, the confusion between the historical geographical term of Palestine, present since ancient times, and the modern-day Arab population, the Palestinians, has further led to an inaccurate perception of the conflict.

This narrative effectively turns the geopolitics of Israel into a culture war issue. By superimposing these false narratives on the Israeli-Palestinian conflict, radical activists are erasing objective truths concerning Israel.