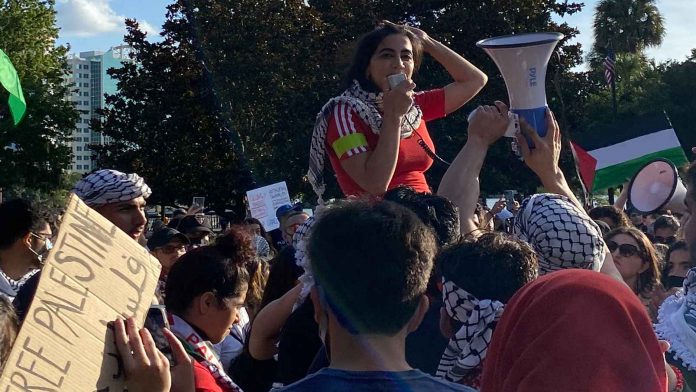 The Jew hatred of Rasha Mubarak — and the Democrats who ignore it.

Rasha Mubarak is an anti-Israel activist, who works hard at getting her bigoted views about Israel and Jews adopted by the Democratic Party. And while she has been shunned by part of the party – likely due to her extreme rhetoric and support for terrorists – in other parts she has been embraced. She has served as a national committeewoman for the party, and she is US Representative Rashida Tlaib’s Finance Director. This month, she made the fantastic claim on Twitter that anti-Semitism plays no role in her activism. That was right before she posted a video of rabid anti-Semite Kwame Ture. When will Democrats call out Mubarak’s bigotry and lies?

For years, Mubarak has been arguing that Israel has no right to self-defense. In November 2012, she tweeted, “#LiesImTiredOfHearing Israel has the right to defend herself.” In February 2013, she flippantly posted on Facebook that, when it comes to Israel, US diplomats mouth the words “‘right to defend itself’… when they snore.” And in May 2019, when Hamas launched more than 600 rockets into Israel leading to the deaths of four civilians, Mubarak tweeted against anyone who would dare defend Israeli retaliation, including former US Ambassador Nikki Haley, New York City Mayor Bill de Blasio, and The Ellen Show producer Andy Lassner.

On numerous occasions, Mubarak has shown support for Palestinian terrorists. At the end of the 2014 Israel-Gaza Conflict, along with photos of a jubilant Hamas, Mubarak tweeted, “Thousands of people celebrating in the streets of Gaza for the victory. Alhamdulillah. #VictoryForGaza.” In June and July 2020, Mubarak posted memorials onto her social media for car-ramming terrorist Ahmed Erekat, who was shot and killed after attempting to run over a female Israeli border officer, at a checkpoint. And this past November, Mubarak promoted then-jailed Palestinian Islamic Jihad (PIJ) leader Maher al-Akhras with a message to free all like him.

Mubarak pushes the disingenuous notion that this – belittling Israel’s sovereignty and supporting Israel’s enemies – is all merely criticism of Israel and that it has nothing to do with Jew hatred. She did just this, when, on May 22nd, she wrote on Twitter and Facebook the following: “There has never been nor will there ever be room for antisemitism in our movement.” It was a total lie, as Mubarak, herself, has organized anti-Israel rallies featuring the worst of anti-Semitism, and she has personally derided Orthodox Jews, when they asked the Israeli government for beard-friendly gas masks for protection, mockingly commenting, “Seriously? No seriously! Ufff… Lol…”

And yet further perpetuating this lie, directly after Mubarak made the “anti-Semitism” statement, she retweeted a video of a speech given by fervent anti-Semite Kwame Ture (a.k.a. Stokely Carmichael). In the speech, Ture questions Israel’s legitimacy, saying that “Palestine didn’t belong to the British” to promise it to the Jews. Ture, in February 1990, was notorious for stating, “The only good Zionist is a dead Zionist” and “Zionism must be destroyed.” Ture has also made the outrageous claim that Israel’s European-born leaders were not Semitic (i.e. Jews), Ture labeling them, instead, with the dehumanizing term “Cossacoids.”

This was not the first time Mubarak promoted Ture on social media. She did so as well, this past July, when she retweeted a photo of Ture along with the quote from him, “In order for nonviolence to work, your opponent must have a conscience. The United States has none.” The quote was a denunciation of civil rights leader Martin Luther King, Jr., who Ture believed was wrong to have rejected violence in favor of peaceful protest. Ture, a former Prime Minister of the Black Panther Party, favored violent resistance.

Mubarak’s statement on anti-Semitism was in response to a similar message posted in social media by Nooran Alhamdan, an Islamist research fellow at the Middle East Institute (MEI). Alhamdan is upset that singer Dua Lipa and models Gigi and Bella Hadid received criticism from a rabbi for singling out Israel for condemnation, while ignoring the deadly actions of Hamas. And both Alhamdan and Mubarak are distraught over the fact that actor Mark Ruffalo, a strong advocate for Palestinians, apologized for falsely claiming that Israel is committing “genocide,” Ruffalo admitting that the term “is being used to justify antisemitism.”

The reality is that both Alhamdan and Mubarak do exactly what Ruffalo apologized for; they use abhorrent rhetoric and exaggerated lies to foster and drive anti-Semitism. They, more so, refuse to condemn Palestinian terrorist groups, who are the real threat to Palestinian society, as these groups care little about life and focus only on murder and chaos using bombs, rockets and tunnels. The goal of Alhamdan, Mubarak and the terrorist groups is the same: destruction of the one-and-only Jewish state, ‘from the river to the sea.’ Their words distancing themselves from anti-Semitism are empty and solely an attempt to provide cover for their own bigotry.

Rasha Mubarak is a rising star in the Muslim community and a politically influential Democratic operative. This speaks volumes about the anti-Jewish ideology being propagated within her party. The Democrats who embrace Mubarak should understand that, when they do so, they as well stand in support of her hate-filled statements and activities. Shame on the Florida Young Democrats, who elected Mubarak to be their National Committeewoman; shame on Rashida Tlaib, whose re-election campaign paid $73,000 to Mubarak’s ‘Unbought Power’ for fundraising and consulting; and shame on anyone who encourages such hatred as Mubarak exemplifies.