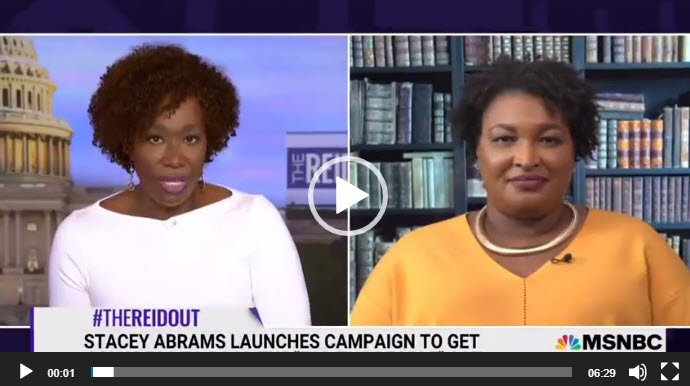 Abrams said, “We have got to pay attention to the fact these laws do things. One, they are anti-voter. They are designed to stop voters the Republicans found inconvenient in this last election. Namely, young people, people of color, the disabled. Number two, these are anti-election worker bills. They are designed to get good people to abandon their post. To criminalize those who still want to do their job and to replace them with those who will undermine the administration of elections. Three, they are designed to subvert democracy. The challenge is, to the extent we have secretaries of state, who support and suborn this behavior, they are hastening the demise of our democracy, and this is not hyperbole. This is exactly what happens across the world when, you know, past, long-standing democracies start to erode.”

She continued, “It begins by undermining how people feel not about the democracy that they have but about the administration of that democracy. And what this is intended to do to convince voters that it is not worth the effort, to your point, about being GOP TV. It’s to convince those who decided to show up for the first time. Who, you know, decided they were going to push through those barriers, once more, that’s not worth it, and it’s trying to convince those who want to believe the big lie that there is something in it for them, on the other side. That, if they break down democracy, they get something better on the other side. Unfortunately, we know that is autocracy. It is not designed for their benefit and not designed for America’s benefit.”

Abrams added, “We know there are a number of U.S. senators who stand to lose their elections in 2022 if we do not protect our democracy. But we also have to remember that, beyond each individual candidate, it’s about who we are as a people, as a nation, are we willing to lose our nation to those who had the failed insurrection in January and decided to franchise it to every single state? The insurrection is continuing, and we have got to stop it in its tracks.”