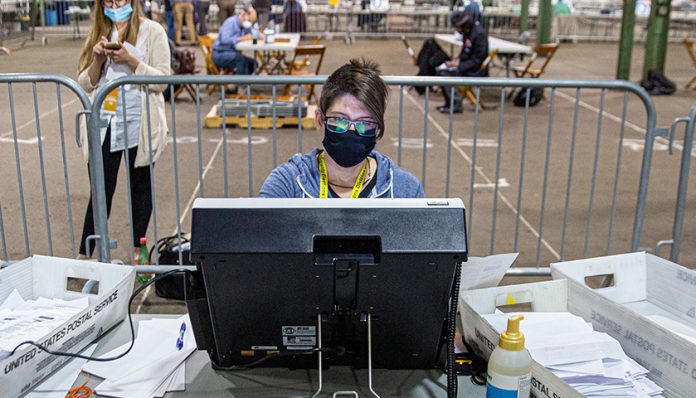 n a nationally televised interview in January, Georgia Secretary of State Brad Raffensperger rattled off an impressive list of measures his state used to ensure the November election count was accurate. “We had safe, secure, honest elections,” he declared to “60 Minutes.”

That rosy assessment, however, masked an ugly truth inside his agency’s own files: A contractor handpicked to monitor election counting in Fulton County wrote a 29-page memo back in November outlining the “massive” election integrity failures and mismanagement that he witnessed in the Atlanta-area’s election centers.

The bombshell report, constructed like a minute-by-minute diary, cited a litany of high-risk problems such as the double-counting of votes, insecure storage of ballots, possible violations of voter privacy, the mysterious removal of election materials at a vote collection warehouse, and the suspicious movement of “too many” ballots on Election Day.

“This seems like a massive chain of custody problem,” the contractor Carter Jones warned in the memo delivered by his firm Seven Hill Strategies to Raffensperger’s office shortly after the election.

That glaring notation was written around 4:00 p.m. on Election Day, when Jones observed absentee ballots arriving at the county’s central absentee scanning center at Atlanta’s State Farm Arena “in rolling bins 2k at a time.”

“It is my understanding is that the ballots are supposed to be moved in numbered, sealed boxes to protect them,” he wrote, noting these ballots weren’t.

He also feared the flow of absentee ballots seemed too voluminous. “Too many ballots coming in for secure black ballot boxes,” he observed.

You can read the full report obtained by Just the News from the Secretary of State’s office here.

Jones also raised concerns about the temporary workers brought in by a firm called Happy Faces to scan and count ballots after an election observer purported to witness a conversation in an elevator in which one of the workers revealed his intention to “f*ck sh*t up.”

“I must keep an eye on these two,” Jones wrote. “Perhaps this was a bad joke, but it was very poorly timed in the presence of a poll watcher.”

He wrote that the two suspect workers had been assigned to a “team confirming and boxing ballots that have already been scanned to prepare them for later audit” because “this is the place where they could do least to achieve their declared objective.”

But Jones expressed larger concerns about the temporary staffing agency’s recruitment of workers. “What is Happy Faces doing to vet the people who they are sending to make sure that they are not sending in people who do actually want to ‘f*ck sh*t up?'” he asked.

Spokespersons for Happy Faces did not immediately respond to a request for comment. A spokeswoman for Fulton County said she would speak to elections personnel that worked with Happy Faces, but she had not responded further as of press time.

“It is no secret that Fulton has had issues in their elections department for decades, which is why I insisted on a state monitor being present to be eyes and ears on the ground,” he said.

Experts said the 29-page report provides a stunning roadmap for an independent investigation of the vote count in Fulton County, such as the one a state judge recently approved to be led by attorney Bob Cheeley.

“This reveal chaos caused by incompetence and in some instances willful violation of law in order to assist Mr. Biden,” said Phill Kline, the head of the Amistad Project, which has mounted election integrity legal challenges around d the country. “This is consistent with the evidence we are finding in Arizona, Georgia, Pennsylvania and Michigan despite efforts at intimidation by Attorney General Garland.”

At the outset of his monitoring, Jones wrote about the difficulties election officials were having in distributing poll pads to local precincts the night before the election. Poll pads are used to check voters in at the precinct level.

One precinct, Jones wrote in the notes, “had only one of two bags of poll pads arrive despite the fact that the system at the warehouse showed that both had been checked out of the warehouse and were on the way.”

“[M]any bags of poll pads and other election materials have not been packed yet and paperwork is not matching up” at the county’s central elections warehouse in Atlanta, he reported.

“Some bags have everything and others do not, but the full ones are not organized,” the notes read. “It is impossible to tell which bags are missing what without doing a manual count and they don’t have the manpower for that at the moment.”

Jones claims that at one point “someone took the wrong suitcase [of poll pads],” something he indicates is a significant security concern.

“Seems to be a mystery who this person was,” he writes. “Should have chain of custody paperwork!! That means that a stranger just walked out with sensitive election materials?”

The chaos of the poll-pad rollout appeared largely resolved by Election Day morning, yet Jones documented numerous other instances of chaotic management and serious security concerns.

For instance, the Jones report touches on one of the more persistent unresolved mysteries surrounding Fulton County’s ballot processing operation, when officials at State Farm Arena appeared to order most election workers to go home at around 10:30 p.m. on election night, after which a skeleton crew continued to count ballots.

“News reaches warehouse that Sec. Raffensperger ‘ripped’ Fulton just came through the wire (apparently someone asked about Fulton stopping scanning at 10:30 while every other county is still working and Sec. said ‘Fulton can’t get anything right’),” the notes read.

About twenty minutes later, Jones observes: “Order is starting to break down[.] Ralph newly re-scanned some ballots that had already been processed by Shaye.”

That was not the only instance in which Jones claims to have witnessed potential double-scanning of ballots. Observing counting on the second day after the election, Jones wrote of a machine that had “shut down because it was causing more problems than it was solving.”

“Double-feeding and cutting through both the envelope and the ballot, which leads to even more duplicates,” he said.

On the night of the election, meanwhile, Jones described what appeared to be difficulties managing flash drives in the state’s election equipment.

“They’re pulling compact flashes (CF),” he said. “[P]oll manager put a Mobile 2 CF in Mobile 1 CF slot, which is causing confusion now. People are talking about a ‘master bus’ problem for the backups, which seems to be causing the confusion.”

And in one case the investigator expressed worries that ballot workers could obtain private data from the documents they were processing, a major breach of voter privacy.

“Are we compromising secret ballot with our ad hoc process?” he asked. “Sorters can see address on the Oath envelope as well as the ballot itself … Voters could theoretically face reprisal if a processor had the desire to do pursue them for their choice.”

Jones did not respond to repeated requests for comment from Just the News, though shortly after being contacted yesterday he spoke to the Associated Press about his findings, stating that in spite of all the issues he observed he did not witness “any dishonesty, fraud or intentional malfeasance” among election workers.

He did tell AP, however, that Fulton County “needs to address these mismanagement issues because they are becoming serious.”

The revelations in Jones’s notes come as a Just the News review of state audit data revealed significant data failures and concerns in Fulton County’s handling of the 2020 election.

Data from the county showed over 150 batches of absentee ballots apparently missing from the county’s official tally, as well as what appeared to be multiple instances of ballot batches being scanned several times.

State audit sheets also suggested that many of Fulton’s absentee ballot batches, when delivered to state auditors, were not sealed per security protocol prior to delivery.