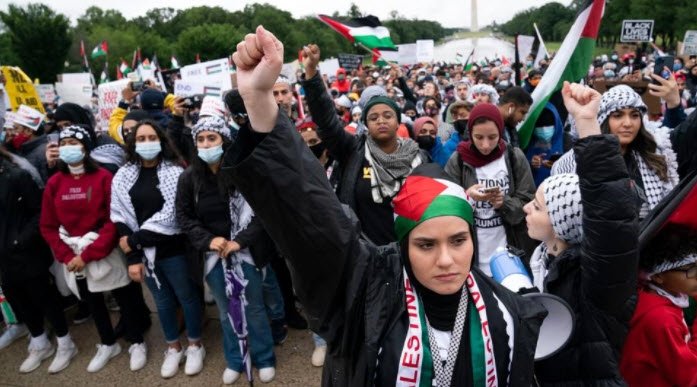 More than 130 Muslim organizations and their acolytes converged on Washington, D.C, on May 29 to participate in the National March for Palestine. In spite of the enormous number of hosting groups, it was a relatively small crowd that marched from the Lincoln Memorial to the U.S. Capitol, ostensibly to protest excessive force used by Israel in the Gaza Strip during its recent 11-day conflict with Hamas. The rally was intended to be the flagship event for a new Islamist-led campaign calling on the government to sanction Israel and end American financial support to the Jewish state.

As usual, the executive director of the Council on American-Islamic Relations (CAIR) chimed in. Nihad Awad called on the gathering of “brothers and sisters … to hold the U.S. government accountable in its complicity with the war crimes that Israel has committed against the defenseless Palestinian people.” He then asked onlookers to pledge financial support to political candidates and organizations who favor Palestine, and to unseat members of Congress who support Israel.

Raja Abdulhaq, a leading, overtly anti-Semitic New York Islamist activist with a long history of supporting Hamas, employed progressivist motifs, equating the “oppression of black people in the country [to the people in Palestine].” He further advanced the narrative of victimhood, citing injustice, colonialism and capitalism—all to shouts of “Free Palestine!” In fact, in recent weeks, Abdulhaq has also repeatedly publicly denounced Muslim activists calling for interfaith dialogue with Jewish Americans.

Preying upon contentious domestic politics, the chairman of American Muslims for Palestine, Hatem Bazian, also juxtaposed the “struggle” of black citizens of America to the people of Palestine. According to the chairman, “You cannot speak of Palestine without recognizing that the freedom, dignity, equality and struggle of our black brothers and sisters are connected to Palestine.”

The rest of the speeches followed a tired, similar theme.

According to Voice of America (VOA), the size of the attending crowd exceeded 1,000 people. On the other hand, Mondoweiss referred to the gathering as “the largest protest against U.S. foreign policy in the nation’s capital in decades,” claiming there were more than 35,000 in attendance. A photo shared by the American-Arab Anti-Discrimination Committee illustrates that VOA’s estimates were the more accurate.

The 130 hosting organizations struggled to muster enough participation from around the country to bring an average of no more than eight people each. It appears grassroots support fell short of the hosting Islamist organizations’ expectations. So, who exactly were these organizers?

CAIR and AMP have long been connected to Hamas’s network in America. CAIR, which is designated in the United Arab Emirates as a terror group, was also identified as an unindicted co-conspirator by federal prosecutors during the 2007 Holy Land Foundation (HLF) terror-finance trial.

As a proxy for the South Asian Islamist movement Jamaat-e-Islami (JeI) in the United States, ICNA has been linked to several South Asian terror-funding organizations. One ICNA arm, the Council for Social Justice (ICNA-CSJ), has a history of expressing open defense of violent Islamist extremists, such as convicted terrorist Aafia Siddiqui. The Muslim Ummah of North America (MUNA), meanwhile, is also closely tied to the infamously violent Bangladeshi arm of JeI.

Another organizing body worthy of mention was the Coalition for Civil Freedoms (CCF), a large terror support lobby group, which was founded by deported Palestinian Islamic Jihad terrorist Sami Al-Arian.

The earlier mentioned Raja Abdulhaq, meanwhile, is executive director the Islamic Leadership Council of New York, another organizing body behind the rally, which claims to represent 90 Islamic organizations in New York. Another host, the Muslim Alliance in North America, is a predominately black Salafi group led by cleric Siraj Wahhaj, a prominent hate preacher once listed as a potential unindicted co-conspirator in the 1993 World Trade Center bombings.

MAS has long served as the leading arm of the Egyptian Muslim Brotherhood in the United States. In 2019, children at an MAS-run school in Philadelphia were caught singing and reading poetry about the torture and killing of Jews.

TASC, one of the umbrella organizations of the Turkish community operating in the United States, is close to the Turkish regime. Interestingly, while Turkey continues to deny an Armenian genocide, fellow travelers such as the Armenian-American Action Network were willing to join TASC at the May 29 rally to denounce Israel.

Not missing an opportunity to exploit a conflict, both TASC and the Palestinian Youth Movement have attempted to connect the Kashmiri conflict to the Palestinian one. To that end, Stand With Kashmir was listed as an endorser of the march among a few other South Asian groups. SWK, an academic-led organization, is best known for praising and defending violent Islamists in South Asia, and works to denounce India with the same rhetoric reserved otherwise for Israel. One leading member of SWK, Sameera Fazili, was appointed to the National Economic Council (NEC) at the start of Biden’s presidency.

While there were several other notable endorsers of the event represented by a variety of activist organizations, the National March for Palestine appeared—perhaps as expected—merely a propagandist event designed by an array of international Islamist movements and a selection of foolish fellow travelers.

Will the demands of this group of race-baiting Islamist activists and their acolytes actually reach the ears of anyone in the Biden administration, compelling him to sanction Israel and cut funding to the Jewish state? Time will tell. But given the tiny crowd size, the administration would be foolish to listen to the agenda of a small but aggressive American Islamist cabal that continues to lack the support of ordinary American Muslims.

J.M. Phelps is a writer for Islamist Watch, a project of Middle East Forum.