Israeli warplanes bombed a Hamas weapons factory in the Gaza Strip early Friday in response to a wave of arson balloon attacks launched at Israel from the coastal enclave the day before, the Israel Defense Forces said.

The army said the site was used by the terror organization to develop and build weapons.

“The strike was carried out in response to the arson balloon attacks on Israeli territory. The IDF will respond with determination against all terror attempts from the Gaza Strip,” the army said.

There were no immediate reports of casualties.

The incendiary balloons launched from Gaza Thursday sparked four fires near Israeli towns along the southern border, breaking more than two weeks of quiet since the last wave of arson attacks.

Most of the fires were small and not dangerous, according to the Fire and Rescue Services, which said that its respondents quickly managed to gain control of the blazes in the Eshkol Regional Council before significant damage was caused.

In June, arson balloons launched by Hamas operatives caused some 20 fires in Israeli communities in the Gaza periphery. IDF planes struck a wide range of Hamas military targets throughout the Strip, responding to the attacks in less than a day. 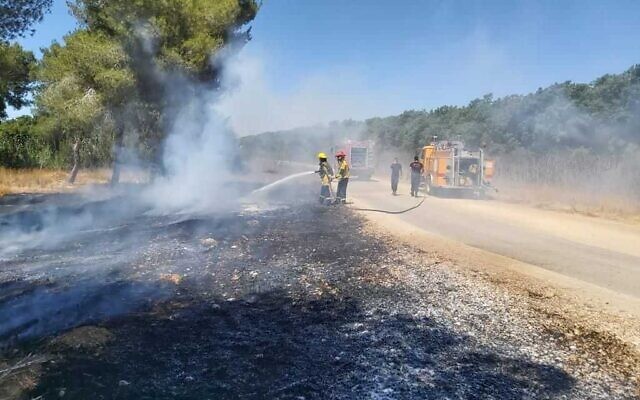 The response by the new government led by Prime Minister Naftali Bennett indicated a shift in policy from the previous one, which did not always respond to arson balloon attacks with airstrikes, and wouldn’t do so as quickly or as forcibly, in order to avoid escalation along the southern border.

Last month’s arson balloons and counterstrikes were the first since the 11-day war that Israel fought against Gaza terror groups in May. They took place amid Israel’s decision to allow far-right activists to proceed with flag march through the Old City of Jerusalem, which Palestinian groups branded as a provocation.

For the past three years, Palestinians in the Gaza Strip, mostly linked to Hamas and other terror groups, have launched thousands of balloon-borne incendiary and explosive devices into southern Israel, causing widespread fires and significant damage to agricultural fields, nature reserves, and private property.

Hamas has used the launching of incendiary devices in order to keep pressure on Israel to move along with reconstruction efforts in the Strip.

Bennett, who replaced Benjamin Netanyahu on June 13, had long urged a tougher response to arson balloons, saying in previous years that they should be treated the same as rockets, and that attacks on southern Israel should receive the same response as attacks targeting central Israel.

In 2018, for instance, Bennett — then the education minister — called for the IDF to try to kill all those launching attack balloons from Gaza, a proposal that was opposed by then-IDF chief of staff Gadi Eisenkot.