On July 1 Facebook users began receiving pop-up messages from the social media company warning them that they “may have been exposed to harmful extremist content.”

It continued, “Violent groups try to manipulate your anger and disappointment. You can take action now to protect yourself and others.”

It then encourages the user to “get support from experts.” 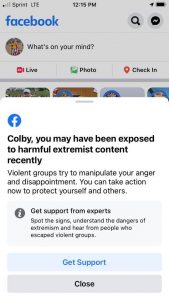 When users click on “Get Support” they are shown a series of bullet points apparently aimed at convincing violent psychopaths to repent. 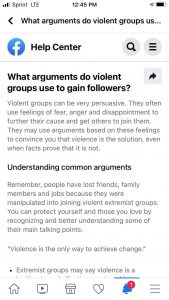 The points argue against using violence to achieve political goals, and attempt to convince users that peaceful means are scientifically more successful. 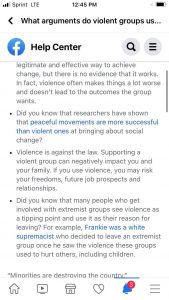 One user who received the warnings, Colby, told me he doesn’t know why he is receiving these messages. He cannot think of anything he recently saw or shared that would prompt what are essentially accusations that he is susceptible to committing violence to achieve his political beliefs. 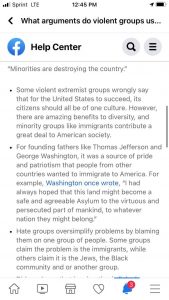 The “Help Center” even tries to invoke the words of Thomas Jefferson and George Washington in an attempt to show these crazies that the founding fathers loved immigration.

That shows you who these messages are targeting– NOT the “mostly peaceful” protesters who topple the statues of “colonizers”, loot Target, and burn down police stations. 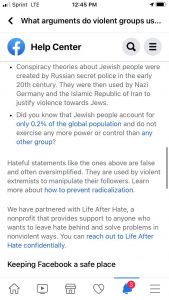 All the messages attempting to talk these apparent potential domestic terrorists off a ledge are patronizing and cringey attempts to convince them not to be racist or anti-Semitic.

None of the people I know who received the pop-up have ever expressed any white supremacist or anti-Semitic sentiments.  Perhaps Facebook confused them for Rep. Ilhan Omar.

Other Facebook users were shown similar messages that asked, “Are you concerned that someone you know is becoming an extremist?” 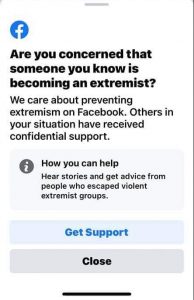 It then goes on to tell users that “Others in your situation have received confidential support,” in an attempt to use social proof to convince users to turn-in their “radical” friends.

These users receive a different message get when click “Get Support.”

Facebook then offers some “Signs that someone is at risk” of radicalization.

At the end, the messages say that Facebook has partnered with a group called Life After Hate, a group “committed to helping people leave the violent far-right to connect with humanity and lead compassionate lives.”

Last year, Life After Hate was awarded a $750,000 grant from the Department of Homeland Security to “disrupt domestic terrorism.”

The organization’s website says, “Our team is made up of people who were part of the white power movement, but got out before it destroyed us and those we love. We left, and you can too.”

Let me reiterate that the people I know personally who have received these messages are not white suprematists, they are not violent, and do not advocate violence.

They love freedom, which hardly makes them a member of the loosely defined catch all “far-right.”

This is further proof that the entire narrative of right-wing domestic terrorism being the nation’s biggest threat is a straw man argument. Many of the people being labeled white supremacists are just normal people who may be firearms enthusiasts, or believe in the free market.

Do you think Facebook will also target violent far-left extremists, like the lecturer at Yale University Aruna Khilanani who recently told Yale School of Medicine’s Department of Child Study Center:

“I had fantasies of unloading a revolver into the heads of any white person that got in my way, burying their body, and wiping my bloody hands as I walked away relatively guiltless with a bounce in my step. Like I did the world a fucking favor.”

What exactly was this “extremist content” these users and their friends were exposed to?

But I asked some of the people who were receiving these messages.

One told me that a friend had recently messaged him jokingly asking if he was QAnon– the leader of a group which believed Donald Trump would be reinstated as president when government insiders arrest deep state agents, including the current administration, connected to child sex trafficking rings.

The two had also been discussing whether recently deceased John McAfee had actually killed himself– after repeatedly telling people for the past year he would not commit suicide.

Another possibility is that Facebook takes memes too seriously…

Here’s a recent one shared by a user who received the messages: 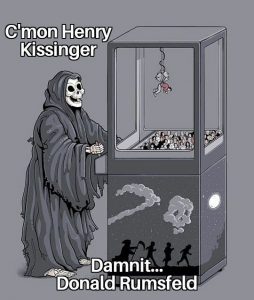 Earlier this month, a senior White House official announced the administration is rolling out a “National Strategy for Countering Domestic Terrorism.”

The official said they will be partnering with social media companies on the initiative. Perhaps this is the beginning of that effort.

Couple says they were booted off US flight for refusing to...