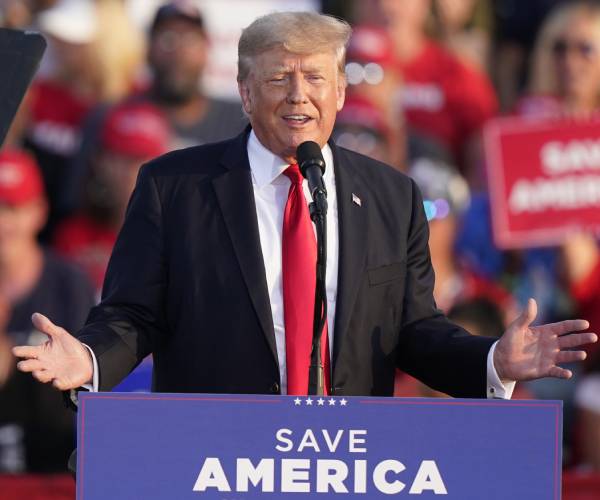 On the eve before former President Donald Trump was set to give a speech at one of his uproaring rallies in Sarasota, Florida, tech giant YouTube suspended Right Side Broadcasting Network (RBSN) from live streaming the event.

“YouTube has suspended RSBN from live streaming and posting content to their YouTube channel on the eve of President Donald Trump’s Save America rally in Sarasota, Florida,” the network wrote in their blog.

According to the RSBN’s Twitter, YouTube also removed a video on their coverage at a rally in Wellington, Ohio. “YouTube has removed RSBN’s videos of President Trump’s rally last week in Ohio and the speech from the NCGOP convention,” the tweet read. “They have also given us a strike, and we are suspended from live streaming for one week.”

Following the Sarasota rally, YouTube had a representative comment on the removal. “The videos contain remarks from President Trump that violate the aforementioned policies and countervailing views on those remarks are not provided,” they said.

So far, there is no information on which policies Trump violated. But some policies YouTube could be referencing include: Spam [or] deceptive practices & scams, Impersonation, Hate speech, COVID-19 misinfo policy, and a more vague section called “additional policies,” which include a section called “posting previously removed content.” Under that section, “if you post content previously removed for violating our Terms of Service, or content from creators who have been terminated under our Terms, the content may be removed, your account may be penalized, and in some cases your account may be terminated.”

In other words, although a reason may not be given for an original piece of content’s removal or, in some cases, more dire consequences, content that relates back to the original content could be removed on those grounds. Still, even if the content is given a vague reason for its removal, reposting it could result in escalated action from YouTube.

The censorship from the platform has caused many to up and flee, forcing them to move to video-streaming platforms like Odysee or Rumble. Additionally, RSBN has created a channel on Rumble.