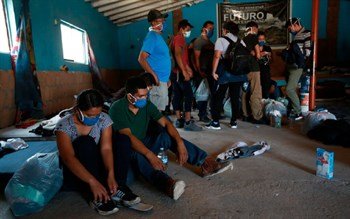 A veteran of the Texas Department of Safety argues that illegal immigration is the “easy issue” to discuss when it comes to the border crisis – while those who are tasked with protecting that border are exhausted as other layers of crime are simply being ignored.

As massive numbers of people and drugs continue to surge into his state, Texas Governor Greg Abbott has pledged to finish the border wall begun under President Donald Trump, but paused on the first day President Joe Biden took office.

When asked about finishing the border wall, Jaeson Jones, a retired Texas Department of Public Safety (DPS) captain, says “it is the right thing for Texas to do what the federal government has refused to do for over 20 years.”

He insists Texas has to act and fully supports the endeavor – but he questions whether it can be accomplished through the multiple lawsuits he expects will be coming forward.

“[The border] is being overrun – and the problem needs to be fixed,” Jones tells One News Now.

The former DPS captain explains that a border wall does more than deter illegal immigrants; it also includes the deterrence of many underlying criminal layers, ranging from the rampant proliferation of fentanyl to cartels transitioning from human smuggling to human trafficking.

In its task of statewide law enforcement, DPS has positioned hundreds of officers – since 2014, according to Jones – from all over Texas for weeks at a time to contend with issues at the border. But the complexity of the situation is taking a toll on the U.S. Border Patrol as well, he adds. While their mission is not necessarily an immigration mission, they are constantly conducting operations to thwart and make arrests for a multitude of other criminal activities.

“[Their primary responsibilities] have been transitioned from a national security mission to a processing mission” – a shift he admits the cartels are taking full advantage of. “Exhaustion and fatigue have set in.”

Accompanying that, the retired Texas Public Safety captain suggests, “[their] hands are absolutely tied when it comes to border patrol.”

While data shows U.S. Customs and Border Protection is being overrun, Jones reveals the other federal agencies – such as the Federal Bureau of Investigation, Drug Enforcement Agency, Homeland Security Investigations, and U.S. Marshals Service – are virtually silent on the issue when they should be providing assets and support.

“Where are the other federal agencies to support and operate in a unified command?” he asks.

Having previously served as a captain in the Intelligence and Counterterrorism Division of the Texas DPS, Jones says immigration isn’t the only issue in the crisis at the border.

“It’s been the easy one to discuss, [and as a result] rarely does anyone – including the media – talk about the other crime layers,” he laments, explaining those “layers” include human smuggling, human trafficking, kidnappings, weapons trafficking, money laundering, and more.

“[I accept that the] Biden administration believes they are doing the right thing under the auspice of compassion, [but] the data shows how [their policies] are hurting the American people,” he contends.

He cites, for example, data showing overdose deaths and the trafficking of people are at all-time highs.

“[These problems] are spreading like a virus,” he concludes. “[They] need to be illuminated so they can be eliminated.”

Image above: Central American immigrants prepare to be led out of a house controlled by human smugglers, to transfer them to a government shelter from which they will be returned to their native country, in Ciudad Juarez, Mexico, Saturday, July 3, 2021. Mexican police found dozens of immigrants in the house who smugglers were trying to enter into the United States illegally. (AP Photo/Christian Chavez)