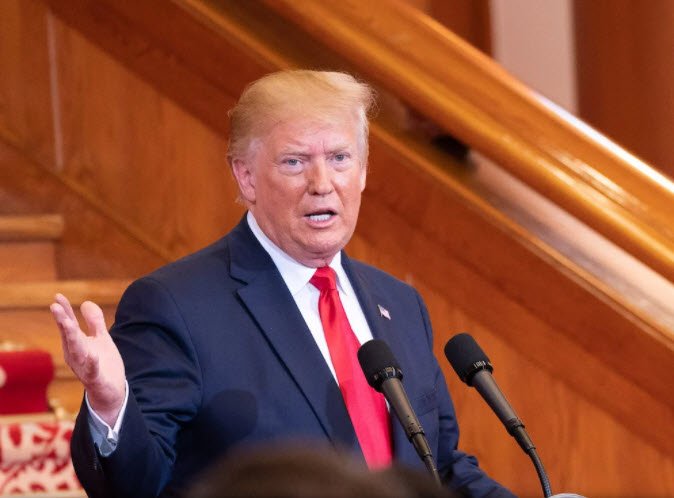 After being banned from numerous platforms, former President Donald Trump announced a class-action lawsuit against CEOs at Facebook, Twitter, and Google in a Wednesday press conference.

“I stand before you this morning to announce a very important and beautiful, I think, development for our freedom and our freedom of speech, and that goes to all Americans,” Trump said. “Today, in conjunction with the America First Policy Institute, I am filing as the lead class representative a major class-action lawsuit against the Big Tech giants, including Facebook, Google, and Twitter, as well as their CEOs Mark Zuckerberg, Sundar Pichai, and Jack Dorsey. Three real nice guys.”

“Social media has given extraordinary power to a group of Big Tech giants that are working with government, the mainstream media, and a large segment of a political party to silence and suppress the views of the American people,” Trump also said.

Twitter and Facebook booted Trump from their websites after the Capitol riot on Jan. 6, and he has yet to be able to rejoin. Facebook said last month its ban on Trump will last until at least 2023, whereas Twitter slapped him with a permanent ban.

“At the end of this period, if we determine that there is still a serious risk to public safety, we will extend the restriction for a set period of time and continue to re-evaluate until that risk has receded,” Facebook said at the time of its ban, blaming Trump for a riot that began 20 minutes prior to him speaking.

The former president made the announcement in Bedminster, New Jersey, at his golf course. House Republicans also released a plan on Wednesday to enforce antitrust on Big Tech and break up the companies.

“We believe that this agenda will serve as the Republican platform to take on Big Tech going forward and unite our party to reject Big Tech’s ‘cancel culture’ practices,” Ohio Republican Rep. Jim Jordan said.

Gabe Kaminsky is an intern at The Federalist. His writing has been featured in the Daily Wire, The American Conservative, the Washington Examiner, and other outlets. He has also appeared on Fox News, Hill.TV, and various radio programs. Follow him on Twitter @Gabe__Kaminsky or email gkaminskycontact@gmail.com.