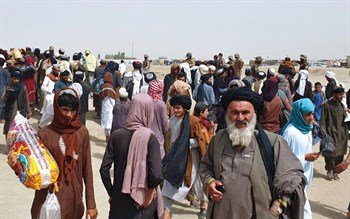 Nearing the complete withdrawal of U.S. forces and allies in Afghanistan, the South Asian country is quickly descending on a path to chaos and conflict.

The withdrawal of U.S. and NATO forces has drawn the ire of former President George W. Bush. As the American-backed government in Kabul, the capital city of Afghanistan, is left to fend for itself, Bush was quick to criticize the move, calling it a “mistake” with grave consequences.

His comments come on the heels of the commander of U.S. and NATO forces in Afghanistan, Gen. Austin Scott Miller, stepping down from his post earlier this week in Kabul, to return to the United States on Wednesday. While Miller was congratulated for his service, experts agree that the Taliban will not miss the opportunity to continue their advance across the South Asian country.

Animesh Roul spoke to One News Now about the repercussions of the troop withdrawal. Roul, the executive director of the New Delhi-based policy research group Society for the Study of Peace and Conflict (SSPC), considers the current situation in Afghanistan to be unfortunate, concurring with the with the bleak assessment from General Miller himself. He admits that the country is “on the verge of a raging civil war as Taliban forces undermine the government at the helm and violate the so-called peace deal.”

The country is extremely volatile, he explains, and the Afghan government finds itself on the verge of collapse. The Taliban have already potentially sieged 85% of Afghanistan territory, which Roul says has triggered a displacement crisis. The SSPC director also points out that in recent months, the Taliban have been hinting about launching more “extensive operations and effective attacks” throughout the country, bidding to take complete control.

Besides the threat of the Taliban, Roul warns that the Islamic State Khorasan Province (ISKP) remains very active and dangerous. He expects ISKP to gain more strength, continuing its targeted violence against the Shia Hazara population. In addition, he asserts that local, tribal armed groups – loyal to warlords – are also organizing themselves to protect their interests and territory.

The specialist in counterterrorism, terror financing, and armed conflict in South Asia reaffirms that “the peace situation will be very bleak once U.S. support ends.” The Taliban are on a quest for power and territory and the re-establishment of the Islamic Emirate. A power-sharing deal would not last long in Afghanistan, as Roul deduces that any proposal of division along the lines of democracy and Islamic theocracy would never be a possibility, as the two are not compatible.

“Afghan citizenry is a tired lot after decades of conflict [and] they have hardly any option to choose.” Roul laments. “They are caught between the devil and the deep sea.”

A pre-2001 situation could return to Afghanistan sooner than later, Roul warns. The counterterrorism analyst says an imminent takeover by the Taliban will help Islamists resurge within the country’s borders. In addition, recruitment and training will rise as tribal warlords and terrorist leaders would pledge allegiance to the Taliban, considering the jihadi proto-state as the legitimate power in accordance with Islamic law.

“Afghan or Central Asian pro-Taliban elements would feel safe under the Taliban Emirate, [and] Al Qaeda elements [like Al-Qaeda in the Indian Subcontinent], as well as like-minded Pakistani groups [like Lashkar-e-Taiba and Jaish -e-Mohammed] would also renew their engagements with the Taliban.”

East Asia and the Middle East could also rear their heads in some fashion, Roul warns.

“After the U.S. exit, all eyes should be on China and how it will play a role in containing or appeasing Taliban forces to safeguard its own interests,” he states, adding that “countries like Turkey and Qatar will also be influential in Afghanistan in the coming years.”

“Looking forward to international legitimacy once [the dust] settles in Kabul,” Roul concludes, “Taliban won’t have any issue with doing business with China or, for that matter, the entire Pakistan-Turkey-Malaysia axis.”