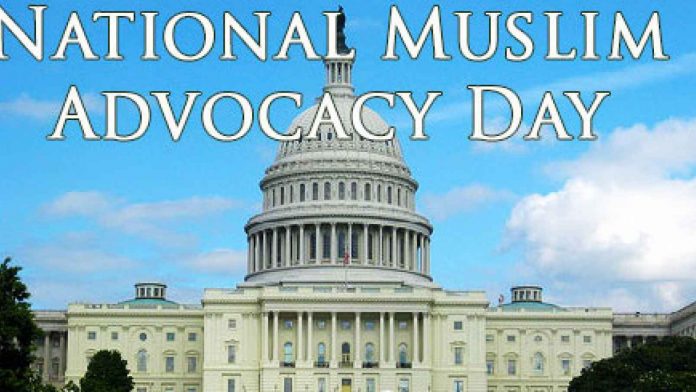 For the past three years, Islamists with ties to terrorist operatives have been meeting with members of Congress. Every spring since 2015, the U.S. Council of Muslim Organizations (USCMO), a coalition of national and local Islamist organizations, has hosted an annual lobbying event titled “Muslim Advocacy Day” in Congress, at the Capitol Visitor Center’s Auditorium.

Over the course of several days, Islamists from across the United States visit congressional offices to lobby for their national and international agendas. The next Muslim Advocacy is scheduled to take place on May 7-8, 2018. The annual event is a serious lobbying effort. The 2017 lobby day, hosted by the USCMO and Council on American-Islamic Relations (CAIR), connected national, regional and state Islamist organizations and community members with their elected representatives in Congress. CAIR reported that 400 delegates from 30 states had met with some 230 elected officials and congressional staff.

Among the delegates at the 2017 Muslim Advocacy Day were many Muslim Brotherhood leaders directly linked to violent Islamists. USCMO’s own leadership includes an Islamist once accused by the U.S. government of funding terrorism conducted by al-Qaeda and the
Taliban. Several leaders in the delegation have elsewhere hosted Muslim Brotherhood operatives convicted of terrorism by a U.S. ally.

The Muslim Brotherhood in America clearly defined its goals in a 1991 document titled “The Explanatory Memorandum,” which outlined the Muslim Brotherhood’s strategic goals in North America. Federal prosecutors introduced this memorandum as evidence during
the Holy Land Foundation (HLF) terror financing trial in 2008—the largest terror financing case in U.S. history. The memorandum discussed what the Brotherhood calls Amalia Jihadiya Hadaria (“Civilizational Jihad Operation”). According to the Brotherhood, the
Civilizational Jihad Operation means “destroying the Western civilization from within, and sabotaging its miserable house.”

The Muslim Brotherhood-organized “Muslim Advocacy Day” on Capitol Hill is part of this effort, as Islamists seek to exert influence within the People’s House to further their totalitarian agenda. They have already had some success: USCMO’s leadership claimed6
responsibility for improving relations between then-Secretary of State Rex Tillerson, and Qatar and the Muslim Brotherhood. The U.S. has failed to understand what our allies in the Middle East already know: the Muslim Brotherhood poses a serious threat.
USCMO was founded in 2014, according to its website, by eight American Islamist organizations:

One of these groups, CAIR, was labeled by federal prosecutors as an unindicted co-conspirator during the Holy Land Foundation (HLF) terror-finance trial, because of its pervasive ties to the Muslim Brotherhood’s “Palestine Committee,” which was established in 1988 to support the terrorist group Hamas. ICNA, meanwhile, has been linked to terrorist organizations in South Asia,10 and AMP is widely considered to be part of Hamas’s network in the U.S.

It should not come as a surprise, then, that the USCMO officials and delegates taking part in its “Muslim Advocacy Day on Capitol Hill” event include Islamist operatives with links to extremism and terror.