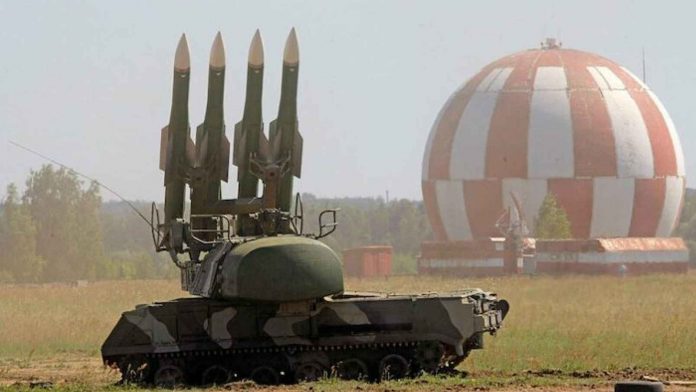 Israel has for years been able to bomb targets in Syria virtually at will. These include Iranian bases, where precision-guided weapons are both assembled and made ready for delivery to Hezbollah, and Hezbollah bases which take delivery of these weapons and take them back to Lebanon. In hundreds of missions over Syria, Israeli planes have successfully avoided being hit; and the Syrian and Iranian defenses have proved unequal to the task of intercepting Israeli missiles.

Having had free rein in Syrian skies for so long, Israeli pilots now confront a different, much more difficult landscape: a Russian advanced missile system, the BUK-M2E, that has apparently managed, in its first day of use, to intercept eight Israeli missiles fired at targets in Homs.

Experts have questioned the Russian-manufactured system’s ability to intercept advanced guided missiles. In addition, images and video of explosions on the ground in Homs alongside reports in media outlets affiliated with rebels in the area of the destruction of weapons warehouses indicate the airstrikes attributed to Israel hit their targets.

The Russians may have intercepted eight missiles, but it sounds as if other missiles did indeed get through, the evidence being both the videos of explosions on the ground and reports, from the Syrian opposition on the ground, of weapons warehouses having been destroyed.

Nonetheless, it remains to be seen just how effective in the long run that Russian BUK missile system turns out to be against seasoned Israeli pilots and their precision-guided missiles. If their past behavior is any guide, the Israelis are quick learners, able to adjust their own techniques; they may have technology up their sleeve that was not necessary to use before but now will be brought into play. No one ever made money betting against the ability of Israeli pilots, planes, and missiles to rise to any challenge.

It’s just been announced, in Arab news accounts, that in separate Israeli strikes in western and northern Syria, a top commander in the IRGC and a senior Hezbollah commander have been killed. Were these strikes undertaken in order to take care of some important targets before the Russian missile system was fully operable? Or were the strikes successful despite the deployment of the BUK missile system? Were the Israelis sending a message to Moscow that they would not be deterred but would continue to operate in Syrian skies, even if it resulted in a greater loss of missiles, as long as some got through? These are questions only the Israelis can answer, and they, as is their wont, remain silent – but determined.

The senior Russian official said, “The decision is directly tied to summit talks between [Russian] President [Vladimir] Putin and US President [Joe] Biden last month.” The source claimed Washington did not approve of continued Israelis strikes on Syria and that Russia had received authorization from the US administration for the move.

Moscow was cautious in its actions against Israeli aggression against its ally in Syria because Israel has a direct line of communication with Washington and carried out all of its moves in coordination with it. Now that Russia has a direct line of communication with the Americans, we’ve succeeded in confirming Washington does not give its blessing to its attacks,” the Russian source said.

This is an incredible act of betrayal by the Bidenites. Biden conveyed to Putin at their June meeting that his administration did not approve of (“did not give its blessing to attacks”) of Israeli strikes in Syria, and that Russia was free to help the Syrians shoot down Israeli missiles over Syria. What can the Bidenites be thinking? Do they want to make It much harder for Israel to prevent Iranian precision-guided missiles from being delivered through bases in Syria to Hezbollah? Is Washington trying to help Hezbollah, a terror group that has helped bring ruin to Lebanon, and poses a permanent threat to Israel? Perhaps the Bidenites want make things harder for Israel, and easier for Iran, in Syria, as one more way to curry favor with Tehran so as to persuade it to return to the nuclear deal of 2015? Does it not realize what a severe threat Israel already faces with 150,000 rockets (very few of which, however, are precision-guided) in Hezbollah’s armory in Lebanon, and that all Jerusalem is trying to do is to keep the much deadlier precision-guided missiles from becoming part of that armory? In signaling that they have no objection to Russia’s BUK missile system being supplied to Syria, the Bidenites have now taken sides in Syria, against our ally Israel and on the side of our mortal enemies, Iran and the terror group Hezbollah. Supporters of Israel should be raising holy hell.

The source said Russian military experts were already assisting Syrian anti-tank teams in intercepting Israeli missiles in the field through the use of the BUK missile system.

“Already last week the Israelis felt the aerial defense systems that were effectively activated and intercepted all of their missiles,” the source said. According to the source, Moscow had relayed a direct message to Israel on the shift in Russian policy, which would now see it provide Syria with consultants and more innovative weapons.

If this is true – that the newly-transferred Russian missiles “intercepted all of [Israel’s] missiles,” that would be terrible. But it’s clear that Israel did manage to fire missiles that were not intercepted, that in separate attacks killed both an IRGC commander and a top Hezbollah commander. Did those attacks take place in parts of Syria where the BUK missile system had not yet been installed? Or has the IAF already figured out how to have its own missiles evade the Russian ones? At this point we don’t know. Worrisome, however, is Russia’s message to Israel that – with American objections having been withdrawn by Biden – it would provide Syria not only with the BUK missile defense system, but with other “innovative weapons” and the personnel (“consultants”) to properly use them.

The interview with the pan-Arab newspaper followed two statements by the Russian Defense Ministry condemning attacks attributed to Israel in Aleppo and Homs provinces. The ministry had previously refrained from commenting on Israeli strikes in Syria….

The Russians are now condemning Israeli attacks in Syria for the first time – before they had refrained from making any comments – because Biden gave them his placet in June.

According to Syrian reports, a military research facility involved in converting missiles into precision missiles for Hezbollah and pro-Iranian militias in Syria was targeted on Tuesday. Five militia members were killed in the attack. Airstrikes also targeted a military airport in Homs, Thursday. According to some Syrian media outlets, Syrian aerial defense systems succeeded in thwarting the attack….

Whom to believe – the Syrians who claim they thwarted an Israeli attack on a military airport, or those in the Syrian opposition who reported successful attacks by Israel,, not only on that airport, but also on a missile-conversion facility? The Syrian government has a long record of lying; the Syrian opposition, on the other hand, has the engaging habit of telling the truth. We should assume Israel hit both targets, but what we don’t know is if these attacks took place before the Russian missile system was operating in the areas affected, or during, and despite, its operation.

Israel will now have to find solutions to the Russian missile-defense system now being installed in Syria. The Russians feel secure in transferring these systems, now that Biden assured Putin in June that the Americans did not approve of Israeli attacks on targets in Syria, and thus would no longer object to Russia supplying the Syrians with missile-defense weapons that will now make the Jewish state’s task much more difficult. This betrayal of a country that has always been our steadfast ally, and has done more than any other country to combat terrorism, should not be forgotten.