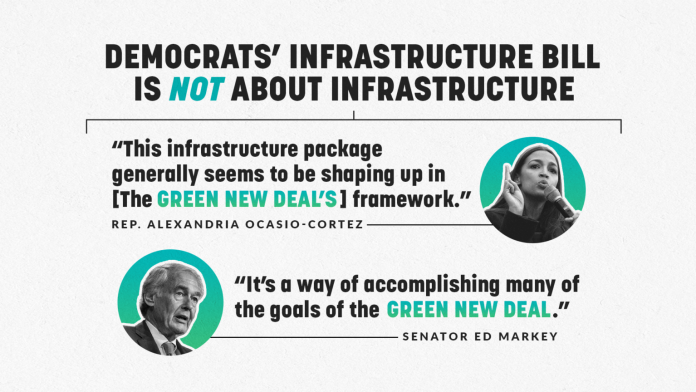 Two weeks ago, I sounded the alarm about amnesty for illegal aliens being snuck into the $3.5 trillion budget reconciliation bill.  The rest of that bill, along with the bipartisan infrastructure bill, is pretty alarming, too.  You really should know what’s in these bills, because they have very little to do with roads and bridges and a whole lot to do with left-wing social engineering and the way life will be lived in this country for decades to come.
​
First up, the 2,700-page $1 trillion bipartisan infrastructure bill (H.R. 3684).  Among other things, the bill:

What did the Republicans get from this bill?  To answer that question, you’d have to know what Republicans stand for these days, which is impossible because they don’t know themselves.

As if all this weren’t bad enough, here’s what’s in the $3.5 trillion budget reconciliation bill:

There’s more, but you get the idea.  Only 5 percent for roads and bridges, and 95 percent for helping the Left march us off a cliff.  If stack-and-pack housing, Big Brother watching you in your car, and never-ending amnesties for illegal aliens is your idea of Utopia, then these are the bills for you.  But don’t come crying to me when it all turns out to be completely unlivable – hell on earth – and the lawmakers who vote for it somehow manage not to have to live by the rules they impose on the rest of us.