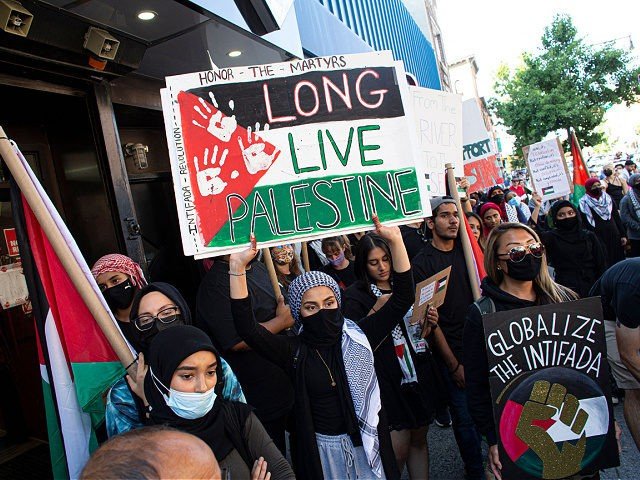 The Saturday demonstration, organized by the radical anti-Israel Within Our Lifetime (WOL), featured large banners calling to “Globalize the intifada,” and declaring Zionism “terrorism.”

The protest’s aim was to “honor the martyrs of Palestine” by “globalizing” the intifada, according to the New York-based Palestinian pro-terror group’s site.

“We will never stop fighting for Palestine until all of the land is liberated from the river to the sea,” the group wrote in its call to protest.

The statement, which is code for eradicating the Jewish state and its millions of Jewish citizens, implies that “Palestine” rests between the Jordan River and the Mediterranean Sea, leaving no room for the current State of Israel.

Protesters held photographs of alleged “martyrs” of Israeli military activity, while some waved Palestinian flags and others blocked traffic and harassed passersby.

Come get the 2 new, FREE Globalize the Intifada stickers TODAY at the Memorial and Rally for Palestine in Bay Ridge at 4:30pm! We will meet at 72nd and 5th Ave to honor the martyrs and be in community with one another. See you there! #globalizetheintifada pic.twitter.com/p2WNkZ2dcx

Openly demanding a violent uprising against the Jewish state, protesters called to “mobilize the intifada,” while chanting that an “intifada revolution” is the “only solution” to the Israeli-Palestinian conflict.

Palestinians have launched two intifadas against the Jewish state, the second of which took place at the start of the millennium and saw hundreds of terror attacks and thousands of deaths over a four-year span.

In one clip, demonstrators clarified they had no interest in coexistence with a Jewish state, seeking only a Palestinian one in its place.

“We don’t want two states; we want all of it!” went one chant, negating Israel’s right to exist.

Openly chanting to destroy Israel on the streets of America.

Sorry but these people are no different than the neo-Nazis in Charlottesville.

This is the byproduct of Ilhan Omar and Rashida Tlaib pic.twitter.com/SMbPPQYvlS

According to WOL’s website, calls to “globalize the intifada” are part of a fresh campaign to support the violent struggle against the Jewish state and elevate it to a global scale.

“This call [to globalize the Intifada] is rooted in direct action and driven by the belief that all colonized and oppressed people have the right to take back their land, to realize self-determination, and to win their liberation by any means necessary [emphasis added],” the site reads.

Claiming to “build upon the revolutionary spirit and inspiration of Palestinian resistance,” the site claims that globalizing the intifada stems from the “urgent need” to “break free from the genocidal grip of U.S. imperialism and Zionism.”

“We too must amplify the spirit of Palestine Liberation in the belly of the beast [America] by linking arms with all those who are confronting U.S. and Israeli aggression globally,” it continues.

The campaign aims to create “new points of leverage” based on the “interconnectedness of our struggles.”

“[T]he forces we are fighting against–the creditor class, the landlords, the cops, the prison industry, the teargas manufacturers, the multinational corporations, the mining companies, and the military defense complex–are all interconnected parts of the same oppressive system,” the site reads.

The site also warns those involved in oppressing people within the U.S. and around the world, “your days of comfort are coming to an end.”

“In the coming weeks, the boroughs of this city will become a theater of operations where we can actualize the interconnectedness of our struggles with a diversity of strategies and tactics,” the site continues.

“Globalize the Intifada will be an ongoing strike at the heart of the empire with Palestine as its compass,” it concludes.

“Their messages couldn’t be any clearer,” she said of the protesters. “Unleash violence against the Jews and eradicate the Jewish state.”

“And all of this in the middle of New York!” she added.

Their messages couldn’t be any clearer. Unleash violence against the Jews and eradicate the Jewish state.
And all of this in the middle of New York! pic.twitter.com/nW4lTw1AC3

Last month, anti-Israel protesters gathered in Brooklyn in an event promoted by WOL to mark American Independence Day by chanting anti-American and anti-Israel slogans and setting both American and Israeli flags aflame as the crowd cheered on the shocking display.

Brooklyn, July 4th: Next time you hear someone say “Free Palestine,” remember this simple truth: they are terrorist supporters who want to destroy everything our society stands for. #EndJewHatred pic.twitter.com/uN9vYHE1Rc

Two days earlier, Nerdeen Kiswani, the group’s founder, appeared at another anti-Zionist rally where she declared that American politicians “serve Zionism” and that New York City is a “Zionist” city.

In a message posted to its Facebook page, WOL called to “resist U.S. imperialism and defend the right of all colonized people to resist from Palestine to Mexico to Puerto Rico to the Black liberation struggle!”

Also last month, during pro-Palestinian Black Lives Matter rallies in New York and Washington, chants were heard calling for “Death to Israel,” “Death to America,” and “From Gaza to Minnesota, globalize the Intifada!” as calls to “abolish the police” were joined with calls to eliminate “the Zionistic state of Israel.”

In June, footage from an anti-Israel demonstration in New York City showed over a thousand demonstrators rallying behind calls for Israel’s demise while advocating a violent uprising and revolution against the Jewish state.

While some were seen carrying signs attacking “U.S. imperialism” and calling for boycotts and a halt to U.S. aid to Israel, other signs called for full-blown violence.

The U.S. has faced a recent outbreak of antisemitic attacks targeting Jews in New York City and other cities across the nation, largely attributed to pro-Palestinian incitement.

In May, pro-Palestinian demonstrators were filmed attacking Jews in Manhattan — allegedly harassing and beating pro-Israel counter-demonstrators, shooting fireworks at a crowd of onlookers, and spitting on diners eating in a local restaurant.

Also, a small explosive was thrown from a pickup truck in the Diamond District — a predominantly Jewish area — sending worried bystanders running for safety. The pickup truck was part of a convoy of vehicles waving Palestinian flags, sources said.