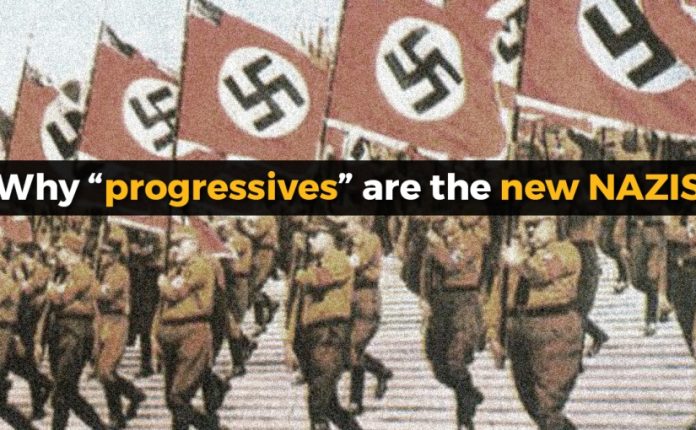 This is an unprecedented horror show’

As the clock struck midnight on Jan. 1, I recall people posting comments on social media along the lines of … “Good riddance to 2020! No matter what happens in 2021 it could not be worse than 2020!”

Fast-forward to August 2021 and I can guarantee many are wishing they could run back in time.

Here we are staring at another potential lockdown, and tensions are rising as people are being forced out of jobs because they won’t take an experimental injection. Medical treatments that a few months ago were considered private are suddenly everybody’s business.

The progressive elites who run our institutions started by threatening people’s jobs and academic careers, and now they’re moving on to forcing people to “show their medical papers” before they can enter restaurants, shows, ballgames, gyms, etc. CNN’s Don Lemon, New York Gov. Andrew Cuomo and others have said businesses should not allow the unvaxxed to enter any store or work any job, period.

Don’t expect them to stop there.

The next step will be to deny medical care to the sick and dying unless they first concede to the injection.

How do I know this?

Because of the way the medical industry, under the spell of Big Pharma, is acting with regard to this very unique serum. It’s so special, we’re told that, unlike any previous vaccine in history, it must be injected into every person on the planet.

When’s the last time you saw state medical boards threatening to pull a doctor’s license simply because he disagreed with some “guidelines” coming down from the CDC or the WHO about how to treat his patients?

The answer is NEVER. But it’s happening now.

“This is an unprecedented horror show, the worst in medical history,” said Dr. Roger Hodkinson, the renown Canadian pathologist, during the “Stop the Shot” conference livestreamed Aug. 4 by America’s Frontline Doctors and LifeSite News.

My advice? Do not rule out anything, no matter how nefarious, from the international cabal that has hijacked our medical establishment. They have already proven themselves to be ruthless. Stone cold killers.

The next step is to deny medical treatment to sick people who refuse their needle.

According to Liberty Counsel, a Florida-based public-interest law firm, the University of Massachusetts Memorial Medical Center is already threatening to do just that to Bernard LaPierre of Worcester.

This 37-year-old father of three young boys has been waiting two years for a kidney transplant and recently found out his wife appears to be a match.

But UMass Memorial reportedly refuses to perform his lifesaving transplant unless he first gets the experimental injection. They’ve allowed for no alternative, no number of tests or duration of quarantine as a substitute.

LaPierre faces a horrifying choice that no human being anywhere, let alone in America, should have to make.

“Either this father of three refuses the kidney, and could die, or he takes the jab, and could die—or become disabled,” said Mat Staver, chairman of Liberty Counsel, which is providing free legal help for LaPierre.

“This shot has resulted in over a half-million adverse reactions in only seven months,” Staver said. “Reported deaths from the shots are now at 11,940. No vaccine or Emergency Use Authorization drug in history compares to the number of adverse events or deaths from the COVID shots.”

Staver believes America is facing a test that is infinitely more serious than if you do or don’t like the shots.

We are all standing in the Valley of Decision. We are all Bernard LaPierre.

Will the federal bureaucrats running Medicare threaten to withhold treatment to our senior citizens who have not been marked on their arms by the Covid needle?

Will Medicaid withhold treatment to indigent Americans who don’t want to be marked on the arm by the Covid needle?

Things seem to be moving very fast toward a totalitarian state with backing from the entire corporate world and the mainstream corporate media.

Biden first ordered employees of the Veterans Administration to get the shots. Then he ordered several million federal employees to take them.

Biden’s politicized Department of Justice issued a shameful memo last month stating the federal EUA law’s requirement of an “option to accept or refuse” does not mean you actually have the option to refuse.

“This memo will result in huge numbers of people being terminated from their jobs, and many who succumb to his lawless edict could die or be injured,” Staver said.

No human being should be forcibly injected with any drug, regardless of its safety record, against their will. Not in any country that claims to be free.

No father should be forced to take the jab in order to undergo a lifesaving transplant.

“Our team is immersed in pleas for help from people like Bernard LaPierre,” Staver said. “To give you a glimpse of the magnitude of need, our website and phone lines were so flooded with calls begging for help that the sheer volume bogged down our server! Although our server capacity is large, we are making it even larger to handle the volume.”

Here are just a few examples of the heart-wrenching pleas coming into Liberty Counsel.

“We are serving as many as we can to opt out of receiving the shot … while developing creative ideas to help millions more,” Staver said. “I’m asking you to help us help these precious people. I am deeply burdened to help these people preserve freedom and protect life.”

We are all standing before our God in the Valley of Decision. America and all of the formerly free nations of the world are teetering on the precipice of totalitarianism.

If you can withhold care from a sick man for refusing a shot, if you can take a man’s livelihood away and deny him the ability to feed his children for refusing an injection, then you can do anything to anyone, for whatever reason.

We stand in the Valley of Decision: On one side we see Him, full of power and glory and righteous authority. On the other side we see the filthy gods of this world, reeking of unrighteous, counterfeit authority, whispering in our ears, telling us to ignore the one true God and do what they tell us is best for our bodies, the very Temples of the Holy Spirit.

LeoHohmann.com needs your help. Please consider a donation of any size to get us through the slow summer months. You may send c/o Leo Hohmann, PO Box 291, Newnan, GA 30264, or via credit card below.