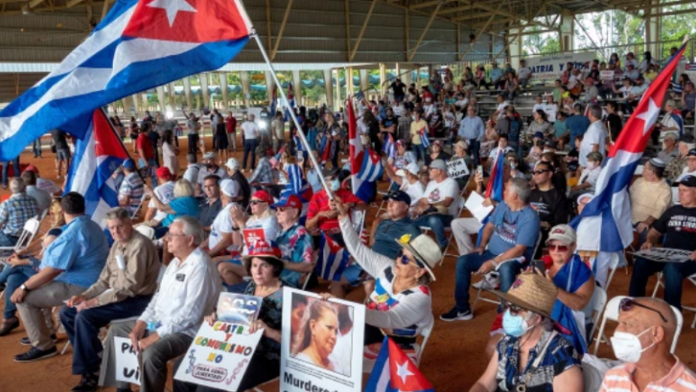 Crisis in Iran and Cuba.

Iran’s new president, Ebrahim Raisi, has not even been sworn in yet, but tensions both within Iran and around the Middle East are ratcheting up a in serious way. Protests that began in Iran’s southwestern Khuzestan Province over electricity blackouts and water shortages amidst the worst drought in 50 years have now spread nationwide. The Iranian people are in the streets in many of the country’s major cities, including the capital, Tehran. They have been massing in the streets and closing major roads and highways. Many Iranians blame regime corruption and mismanagement for the severe lack of electricity and water during the worst of the region’s blistering summer heat. In fact, Iran’s hydroelectric system is near collapse. And while Iranians first took to the streets of Khuzestan to protest the water shortage, their chants now are calling for the fall of the regime itself (“Death to the Islamic Republic”) and “Death to Khamenei!”, the Supreme Leader of the Islamic Republic.

The timing of these protests coincides with the elevation of Ebrahim Raisi to the presidency, with his inauguration scheduled for Thursday, 5 August 2021. Raisi’s June “selection” was openly arranged by Supreme Leader Ayatollah Ali Khamenei in a presidential campaign and voting that was boycotted in protest by most of the Iranian electorate. Raisi rose to power in the ranks of the judiciary and was the Judiciary Chief before being tapped as Iran’s next president. He is known and reviled for his savage violations of human rights, especially in his role on the Death Commission that sent tens of thousands of Iranian prisoners, many of them belonging to the People’s Mojahedin Organization of Iran (PMOI/MEK), to their executions in 1988. In typical fashion – and likely preview of Raisi’s presidential role as the regime’s enforcer — Tehran has unleashed its security forces against the people, using live fire against demonstrators, disrupting Internet service, and carrying out sweeping arrests.

The intensity of Iran’s unrelenting domestic upheaval combines with an escalation of regional tensions that together are pummeling the regime. Sensing that developments are spiraling out of its control, the Tehran regime is lashing out in multiple directions, both at home and abroad. The situation in Lebanon is deteriorating as Iran’s jihadist proxy, Hizballah, is facing an ongoing economic and governmental crisis that shows no signs of abating. Recent rocket fire out of Lebanon into Israel has been met with retaliatory artillery strikes by the IDF, which also has been conducting air strikes inside Syria targeting Iranian weapons deliveries. Additionally, Israel has been launching maritime strikes against ships carrying Iranian oil and weapons in regional waters. Beset within and without, the Iranian regime hit back at Israel on Friday 22 July 2021 with a drone strike off the coast of Oman in the Arabian Sea against a Liberian-flagged oil tanker operated by an Israeli-owned firm. The attack against the Mercer Street killed two crew members. Although Iran initially denied being behind the attack, an Iranian TV network later admitted responsibility, claiming it was retaliation for an Israeli strike inside Syria.

The Biden administration, desperate to revive and rejoin the 2015 Iran nuclear deal (Joint Comprehensive Plan of Action, JCPOA), has been frustrated at Iranian stalling on a seventh round of talks, even as it watches Tehran breach virtually every provision of the deal. But repeated U.S. offers intended to appease and compromise with the Iranians have been rebuffed. Instead, the White House has been forced to witness increasing Iranian belligerence across multiple fronts, again, even before Raisi is sworn in. Faced with the latest provocation from the Iranian regime in the deadly attack on an Israeli-owned commercial tanker, it is reported that the U.S., United Kingdom, and Russia have given Israel a “green light” to retaliate against Iran.

But for the Iranian people, in the streets crying for their liberty from an oppressive regime, the U.S. State Department had only the blandest words of support, saying in a 28 July statement that “[t]he Iranian people have a right to voice their frustrations and hold their government accountable” and urging the regime “to allow its citizens to exercise their right to freedom of expression…”. Instead of calling out the repressive thugs that crush the Iranian people (and are responsible for the murder of thousands of Americans on 9/11), U.S. Secretary of State Antony Blinken merely murmured softly about the “people’s deep frustration with the failure of the government to meet their basic needs”, adding meaninglessly, “And, of course, we stand with the people of Iran in the desire to have their voices heard”.

The Biden team’s temerity in facing up to Iran’s brazen behavior is of a piece with its craven lack of meaningful response to the courageous uprising of the Cuban people against their tyrannical communist regime. Cubans have been in the streets for weeks now, openly crying for “Libertad!” (Liberty) and an end to communist dictatorship. But as Judicial Watch’s Chris Farrell points out in a devastating 2 August piece at Gatestone, “Biden does not care a damn about the Cuban people throwing off 60+ years of communism…[h]alf of Biden’s White House staff probably…admires Fidel and Raul Castro and can be found wearing Che Guevara T-shirts on the weekends”. Farrell also correctly identifies Vice President Harris as “virtually a Marxist”. See Trevor Loudon for more on her multiple communist affiliations over the years as well as the deep infiltration of the Democrat Party by the Democratic Socialists of America (DSA).

The late July 2021 forcible repatriation by the Biden administration of more than two dozen Cuban refugees trying to flee their oppressive communist regime must live in infamy as one of the most abominable capitulations to liberty-crushing tyranny any U.S. administration has ever committed. The return of the Cubans to a Cuban regime that will surely arrest, jail, and torture them, if not simply kill them, was presaged on 24 July by a despicable statement from U.S. Secretary of Homeland Security, Alejandro Mayorkas (himself a Cuban refugee), that warned Cuban asylum seekers “They will not enter the United States”.

The disturbing conclusion on the Biden administration is that cries for freedom from those suffering under despotic tyranny will not be heard, will not be answered, will not be helped. Sympathy from this White House leadership is only for criminals who illegally cross our sovereign borders and oppressive regimes in places like Cuba and Iran that keep a jackboot of oppression on the throats of their people.