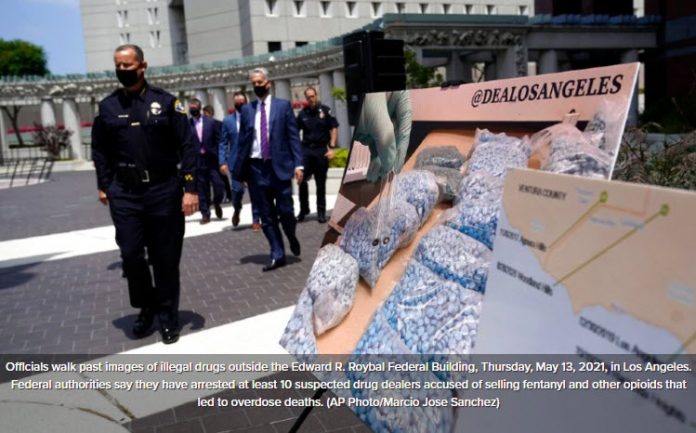 The southern border of the U.S. is being flooded with migrants and deadly drugs – and a former DEA official says it’s part of a well-orchestrated strategy that’s resulting in thousands of deaths.

The United States has entered a “historic crisis level” of apprehensions at the U.S.-Mexico border during the month of July – and there doesn’t seem to be an end to the record-climbing levels in sight. Todd Bensman, senior national security fellow at the Center for Immigration Studies, warns that “what the data does not show are the additional 37,000 illegal immigrants who are estimated to have evaded Border Patrol entirely.”

One News Now spoke to Derek Maltz, a former head of the Special Operations Division (SOD) of the Drug Enforcement Administration (DEA) about the accompanying surge of illegal entries bypassing Border Patrol. Maltz contends a well-orchestrated strategy is taking place – and the scheme has deadly repercussions.

Numerous reports indicate Border Patrol is being flooded with migrants – some who indeed may be seeking opportunity in the land of the free, but others who are intentionally harming American citizens.

“[Many of the nefarious actors] are being sent between ports of entry like there’s no one there watching,” Maltz states.

The tactic, according to the former DEA executive, is called “flooding the zone” – a popular tactic that cartels employ to maximize their profits.

“What they do is bombard a certain sector with mass amounts of migrants where Border Patrol is present,” he describes. “And while Border Patrol is distracted by migrant care duties rather than border security duties, they then flood another zone with special interest aliens and drugs.”

A freeway for fentanyl

That tactic opens the zone for the transport of money and weapons moving southbound, Maltz explains. “[Cartels] are using very robust and well-thought-out strategies to maximize their profits and minimize any type of exposure,” he adds.

According to Maltz, neither the Department of Justice nor the talking heads of mainstream media are sharing information about the tactics or influence of Mexican cartels as they relate to the trafficking of deadly drugs across the border and the rising levels of fentanyl-related deaths in the country.

“They’re being cute trying to control the message,” he shares, “but in reality, they should be educating the public on how fentanyl poisoning is killing Americans at record levels never seen before in the history of the country.”

Maltz isn’t convinced the Biden administration is confronting the reality of the fentanyl problem, as he believes the overarching focus on opioid addictions is somewhat misleading. “Yes, there is an opioid crisis in the country, but right now,” he argues, “they should be more concerned about fentanyl poisoning and fentanyl murders.”

The former DEA exec explains why that should be the priority.

“Mexican cartels are making poisonous fentanyl,” he offers. “[They’re] making counterfeit prescription pills, mixing the fentanyl with other drugs, and flooding the streets of America every single day.”

And while he’s pleased that the Biden administration understands the need for education and treatment, “it’s too late to educate and treat a young American who’s in the morgue.”

It just gets scarier

The seemingly unrestricted flow of fentanyl into the country must be stopped, Maltz proclaims. Mexican cartels are in the business for one reason, and that’s to maximize profit, he says. “While thousands are dying in the wake of the cash flow, cartels continue moving forward with their global operations” to do one thing: maximize their profits.

“Their priority is getting people addicted so it generates more customers,” he continues, lamenting that the thousands of fentanyl-related deaths are merely collateral damage to the cartels.

“While they are not deliberately trying to kill their customers, [members of the cartel] are also not trained, FDA-certified chemists who know how to mix fentanyl – [and] it only takes the equivalent of four grains of salt, 2 mg, to kill an American,” he adds.

“The story gets scarier as fentanyl continues to kill future generations of Americans.”

He agrees with Dan Steiner who is convinced China is making a deliberate attempt to destabilize America. By providing the precursor chemicals to manufacture drugs, Maltz argues that China “is simply allowing the Mexican cartels to do their dirty work.”

The role of the Chinese transnational criminal network is being put on notice. Attendees at a rally later this month in Washington, DC, will demand an end to the trafficking of poisonous fentanyl from China to America. Maltz is slated to be among the speakers at that rally.