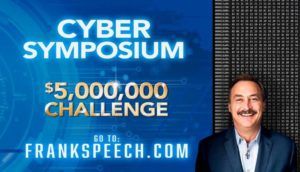 It was back in June that My Pillow CEO and entrepreneur Mike Lindell filed a new lawsuit against Dominion Voting Systems in the state of Minnesota.

That lawsuit contained an “Exhibit 12” that made a most startling claim.

In that particular exhibit, Lindell alleges that he has in his possession authentic network data packet captures [pcaps for short] that were recorded by unknown mystery persons he describes as ‘white hat hackers’ between Election Day November 3, 2020 through November 5. And that these pcaps clear and – to use Lindell’s word – “irrefutably” – prove that not only were thousands of election machines all across the United States connected to the internet during the 2020 election, many of these machines were successfully hacked into from foreign countries.

Lindell also makes the eye-opening claim that the ‘entire election’ from November 2020 was recorded in these packet captures and he has it all. And he can prove conclusively that the 2020 election was stolen from former President Donald J. Trump.

Several IT and Cyber Security experts approached by the news media to address Lindell’s claims  have scoffed at them  and dismissed them out of hand.

In an recent article from Dakota News Now, IT and cybersecurity expert Brian Linder of Check Point Media, regarded as one of the top ten Cyber Security firms in the world, was asked about Lindell’s claims.

Linder says he looked at a sample of a packet capture displayed by Lindell and was distinctly unimpressed. In fact, he directly accused Lindell of making false claims.

“Experts looked at the so-called packet captures that he had. And in fact, it was not an encrypted packet capture at all,” said Linder. “As a matter of fact, it was an unencrypted stream of meaningless data that mentioned clothing manufacturers it had nothing to do with voting. So he claims to have a raw packet capture that’s encrypted. He doesn’t have that, that’s absolutely a false claim based on the data he provided. Completely false.”

Dakota News Now reporter Beth Warden then asked Linder if it was even possible to electronically ‘capture’ an entire election.

Linder told her: “To intercept and packet capture all of an election, I

think the way the New York Times described it, technically incoherent. I cannot imagine a scenario where it could be pulled off at all.”

Instead of backing down in the face of waves of such criticism since he filed the lawsuit two months ago, Lindell doubled, and then tripled down on his claims.

First, he announced he would be holding a “Cyber Symposium” where he claimed some of the top cyber security and IT professionals in the world would verify the validity of these election data packet captures.

Second, Lindell boasted that he was putting up a reward of $5,000,000 of his own moneyto anyone who attended the Symposium who could successfully prove that these data packets are not what he claims they are.

Although the Symposium is limited only to invited guests and selected news media, Lindell has said he will ensure plenty of skeptics will attend the Symposium. Any one of those skeptics will be five million dollars richer if they can successfully embarrass

Lindell by demonstrating these packets don’t show what he’s been claiming they do.

What’s going to happen at this Cyber Symposium is anybody’s guess.Rampant speculation is flying around all over the place on various news and social media websites as the start date rapidly approaches.

Some people think they know exactly what’s going to happen. Others are limiting themselves to discussing what they hope will happen.

And others are pretty sure this whole symposium thing is a huge fraud and a con that is going to lead to one of the most spectacular self-immolations in world history, as Mike Lindell figuratively sets himself on fire live in front of millions of viewers and burns himself to ashes.

Also, the question has arisen of if this symposium will actually be held.

First there were rumors that the 1/6 panel in the House was going to subpoena Lindell and force him to cancel the Symposium by making him come to Washington D.C. and testify about his supposed involvement in encouraging domestic terrorism during the January 6 Capitol riot.

ment of Justice for fraud. That rumor didn’t seem to have any specificity to it, though, exactly as to who Lindell supposedly defrauded and how.

There seem to me to be only 4 main possibilities here:

1. Lindell has nothing. This is all a massive fraud he did to get attention and sell pillows.
2. Lindell has something, but not even close to what he’s claiming he does. He will end up being

massively embarrassed – and $5 million poorer when this is over.
3. Lindell has what he says he does but can’t conclusively prove when and where these pcaps were recorded, so they are inadmissible in court.
4. Lindell has what he claims, and he can prove when and where they were recorded, which means they do constitute legal proof that would be admissible in court.

What Does Lindell Actually Have?

Is it really impossible to digitally ‘catch’ and record so much election data?
Several of the cyber security and IT experts who have taken a look at Lindell’s claims and dismissed them as false say it would be impossible for anyone to hack into 3,000+ individual US counties election systems and record information like this.

But who said you had to hack into 3,000+ different machines in 3,000 different counties? Each county is digitally sending its tabulation results from the county to the state.

It’s been explained to me by a former top IT professional who used to build supercomputers for the National Security Agency [NSA] that if these packet captures are genuine, it would mean somebody found either one main ‘tap point’ or several ‘tap points’ inside or near large networks where all this county election data was being streamed and managed to hack into these networks and record the information passing through them.

So, there’s no need to hack into 3,000 individual county election systems. The hackers would merely need to ascertain ahead of time, perhaps through dry runs or election system software updates in the days leading up to the election, where the main hub or hubs were located and then position themselves nearby to hack in and capture the incoming and outgoing network traffic.

However, even if all this digital information is successfully intercepted and captured, there’s another problem that presents itself: proving all of this packet data was recorded when you claim it was.

Lindell has repeatedly claimed the pcaps he has are “irrefutable proof” and that time stamps and location stamps contained inside the packet captures themselves are ‘set in stone’ and ‘cannot be edited later’. That would mean the packet captures were cryptographically “hashed” almost immediately on being recorded.

A hash is a string of random-looking characters that uniquely identifies the data in question, much like your fingerprint identifies you. You can hash any data, whether it’s a file (like a music MP3 or spreadsheet) or just a string of characters (like a password). You find the hash by running the data through a hash generator. Every time you hash the same data, you will get the exact same hash value as a result.

If a data stream is hashed correctly, it is indeed impossible to go back and alter it later or edit it without that being spotted. So what Lindell appears to be describing is a process in which these data packets he has were being hashed right as they were recorded or shortly afterwards.

To capture and hash 37 terabytes of digital pcaps while you are in the process of recording them is a tall order. Some IT people I have reached out to and discussed this with have told me they don’t think it’s possible, with current technology. Then again, we only know what the NSA or the DIA or Space Force deign to make public when it comes to their currently available technology.

The good news is, we only have to wait just a few more days to find out if Lindell has what he’s been claiming he does. If he does, it’s game over for a lot of people who have a whole lot of explaining to do, and Mike Lindell will be a hero. If he doesn’t? He’s going to end up looking like the world’s biggest dope.

I make no secret that I am rooting for Lindell to come through and be a hero. But if he ends being a dope, I’m going to have to say so.

Whatever happens over these three days in Sioux Falls, I have a front row seat to watching it unfold. I will be there inside the  South Dakota Military Heritage Center  for the three-day Symposium from August 10 through the 12th, covering the event as the man on the ground for Uncover DC and The X22 Report.

I will be posting regular updates to my Telegram channel:  https://t.me/drawandstrikechannel

I will also be attempting to livestream to my Twitch channel: https://www.twitch.tv/drawandstrike3

New physicians’ alliance: Hospitals are killing people, doctors are being ‘hamstrung’ by regulators, leading to ‘hundreds of thousands of excess unnecessary deaths’