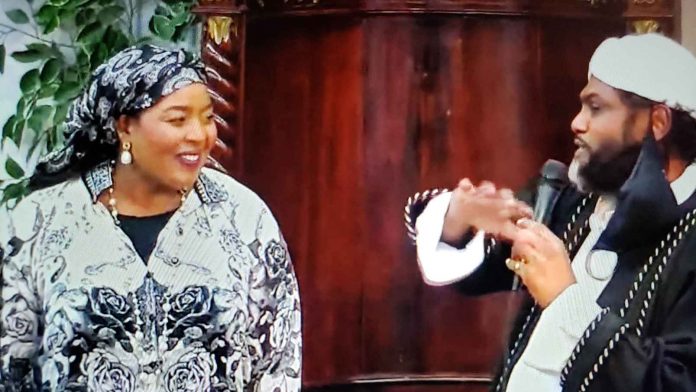 Broward County Commissioner Barbara Sharief has the distinction of having been Broward’s first black female mayor and first Muslim mayor. For the past 12-plus years, since she has held different elected political offices, she has, for the most part, kept a distance between herself and Islamist groups, of which there are many in South Florida. In fact, in 2016, it was reported that Sharief had not “been in a mosque since she was a teenager.” As a current candidate for US Congress, though, things have changed, as she now appears to have embraced radical Islam in a big way. This article was written to expose the potential danger she poses to the community.

Barbara Muhammad Sharief, in her youth, had a close relationship with the Nation of Islam (NOI), the black separatist group headed by rabid anti-Semite Louis Farrakhan. Sharief had been a student at NOI’s Clara Mohammed School (CMS), located in Miami, and she, her mother Bobbie, and her late father James, had been active members of Masjid Al-Ansar (MAA), the mosque where the school was and still is housed and where boxing champion Muhammad Ali reportedly worshiped during his earliest days as a Muslim. According to the South Florida Times, Sharief gives “credit for her success in part… to the Clara Mohammed School system.”

This past April, Sharief, in her capacity as Broward Commissioner, read and presented a proclamation to representatives of the Muslim Students Association (MSA) designating April as ‘Muslim Heritage Month.’ The ceremony was held at the Islamic Foundation of South Florida (IFSF). In April 2014, IFSF hosted a talk by Mazen Mokhtar, a former admin for the now-defunct al-Qaeda recruitment site, qoqaz.net, and supporter of suicide bombings. IFSF’s ex-Youth Director Abdur Rahman al-Ghani, on Facebook, called Jews “demonic” and the US the “World’s Number One Terrorist Organization.” He threatened, Islam “will overtake the world in numbers.”

Speaking at Sharief’s IFSF event was Samir Kakli, President of the South Florida Muslim Federation (SoFlo Muslims), an umbrella organization for the majority of South Florida’s radical Muslim groups. One mosque the Federation harbors, Masjid Jamaat Al-Mumineen (MJAM), promotes on its website material referring to Jews and Christians as “the enemies of Islam” and advocating female genital mutilation, death punishments for homosexuals, and the stoning of women. MJAM’s imam, Izhar Khan, who sits on the Federation’s Council of Imams, was alleged by the FBI to have helped finance the Taliban for the purpose of murdering US troops overseas.

In May, Sharief did a video greeting to wish the Muslim community blessings during the holiday, Eid. While such a message would normally be viewed as innocuous, this particular one included an assault on Israel. She said, “This is a time where we should reflect and pray for those… who are under attack. Palestine needs our help and they need our support, and it’s unacceptable to have a place of worship be attacked.” No doubt, her words were reference to Israeli security entering al-Aqsa, and without getting into the false implication of her statement, her singling out Israel for condemnation was an anti-Semitic message to Islamists that she stands with them.

In June, Sharief was interviewed by Shafayat Mohamed, the imam of the Darul Uloom mosque, located in Pembroke Pines. In July, she spoke at the mosque. Darul Uloom has been a haven for high-profile terrorists. “Dirty Bomber” Jose Padilla was a student of Mohamed’s at Darul Uloom, and now-deceased al-Qaeda commander Adnan el-Shukrijumah was a prayer leader there. Mohamed, himself, was thrown off a number of community boards for his public vitriol against homosexuals. In February 2005, Darul Uloom published an article written by Mohamed, titled ‘Tsunami: Wrath of God,’ claiming that gay sex caused the 2004 Indonesian tsunami.

The past two months, prominent members of the Muslim community have been holding private affairs for Sharief, including a July ‘Meet & Greet.’ Attending the events and posing for photos with Sharief was COO of ICNA Relief Abdul Rauf Khan, who is an avid fan of Louis Farakhan and has used Facebook to target Jews and gays. ICNA or the Islamic Circle of North America is the American arm of South Asian Islamist group Jamaat-e-Islami (JI). ICNA continues to promote domestic violence against women on its Why Islam (WI) website, and ICNA has spent 30-plus years harboring Ashrafuz Zaman Khan, a former death squad leader wanted for murder.

In May 2011, following the killing of al-Qaeda leader Osama bin Laden by US Navy SEAL Team Six, Sharief was interviewed by the Fort Lauderdale Sun Sentinel about her thoughts on the matter. She spoke of a negative “perception that bin Laden and 9/11 gave to the religion of Islam.” She told the publication, “What he did was completely opposite of what Islam and what its people stand for. Islam is a very, very laid back and very accepting religion… Peace and friendliness and cohesiveness is something I think that the Islamic community looks for.”

While this may very well be Sharief’s opinion, and she is certainly entitled to it, her actions, in cavorting with those from the Muslim community who are linked to bigotry and violence, make the commissioner out to be a total hypocrite. Indeed, the individuals and groups Sharief has been associating with epitomize – and this author uses Sharief’s own words – the “complete opposite” of the “peace and friendliness and cohesiveness” she speaks of.

Barbara Sharief is running for US Congress, one of the most powerful positions in our nation. If she wins, she will represent local communities throughout South Florida. Yet, because of her extremist affiliations, Sharief may actually be a threat to those same local communities and the nation in general. If local and national security mean anything to the voters of Florida Congressional District 20, their votes must go elsewhere.