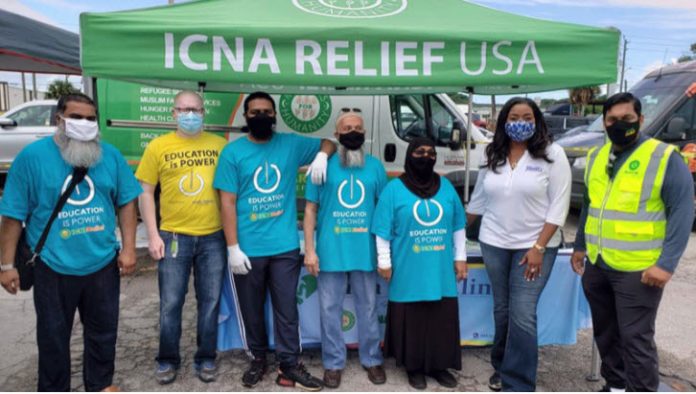 Joe Kaufman is a Shillman Journalism Fellow at the David Horowitz Freedom Center and the Chairman of the Joe Kaufman Security Initiative. He was the 2014, 2016 and 2018 Republican Nominee for U.S. House of Representatives (Florida-CD23).

In January 2011, Broward County, Florida Commissioner Barbara Sharief’s name was listed as a speaker at a conference sponsored by the Islamic Society of North America (ISNA), on ISNA’s conference schedule. When this author questioned her participation at an event put on by a radical Muslim group – ISNA was co-founded by Palestinian Islamic Jihad (PIJ) leader Sami al-Arian and had been named by the US government a co-conspirator in the financing of Hamas – Sharief claimed she had rejected the request to speak at the conference and said she had “no idea” why her name was attached to it. Today, Sharief cannot speak at enough Islamist events.

Sharief, while still a Broward commissioner, is currently running for US Congress, in the Democratic Primary of the 2022 special election to replace Alcee Hastings, who was recently deceased. Since announcing her candidacy, Sharief has become a regular at functions sponsored and hosted by Muslim groups associated with terrorism. On August 8th, Sharief was the “Special Guest” at an event sponsored by the Islamic Circle of North America (ICNA), not to be mistaken for ISNA. The event – a giveaway of cheap backpacks and school supplies to children – seemed innocuous. However, when it comes to ICNA itself, nothing is innocuous.

ICNA is the American arm of Jamaat-e-Islami (JI), South Asia’s largest Islamist group. ICNA has spent 30-plus years harboring Ashrafuz Zaman Khan, a former death squad leader allegedly responsible for the murder of 18 individuals. In July 2014, ICNA co-sponsored a pro-Hamas rally in Downtown Miami. In March 2000, ICNA asked its followers to provide “material support” to Chechen militants linked to al-Qaeda. The Public Relations and Government Affairs Coordinator of ICNA Relief USA, Ammar Ahmed, once joked about threatening to blow up a school. And ICNA continues to promote domestic violence against women on its Why Islam (WI) website.

At the ICNA event, Sharief was photographed with Rasheed Mahamad, the Assistant Secretary of the American Muslim Association of North America (AMANA). In July 2010, Muhamad’s AMANA was condemned by the Anti-Defamation League (ADL) for posting what the ADL called a “venomous” anti-Semitic video, featuring David Duke, on AMANA’s official website. Mahamad devotes a large part of his social media to Fadi Kablawi, the imam of the North Miami Islamic Center (NMIC). This past December, Kablawi referred to Jews as “the lowest of the lowest.” In March 2018, Kablawi told his congregation that the FBI considers him to be a member of ISIS.

On August 6th, two days prior to the ICNA affair, Sharief spoke at the Islamic Center of Boca Raton (ICBR). Facing the audience, along with her, was ICBR co-founder Bassem Alhalabi. Alhalabi was a former assistant to and co-author of publications with Sami al-Arian, and in June 2003, he was charged by the US Commerce Department with illegally shipping a $13,000 thermal imaging device to Syria. ICBR fellow co-founder, Syed Ahmad, was a website designer for Hamas. In October 1999, ICBR posted a violently anti-Semitic essay on its website, referring to Jews as “enemies” and speaking of a day when Muslims will “fight the Jews and kill them.”

At the ICBR event, Sharief was photographed with Chief Operating Officer of ICNA Relief and Secretary of ICNA Florida Abdul Rauf Khan. The two have been photographed, at a number of her recent events. Khan is an avid fan of Louis Farakhan and has used his social media to target Jews and gays. In July 2014, Khan promoted on Facebook an anti-Semitic video labeling comedian talk show host Bill Maher, “Zionist Jew Bill Maher.” In April 2018, Khan posted the anti-gay propaganda piece, Why is it haram to actively be gay? It was produced by a media outlet that openly supports Hizb-ut-Tahrir (HT), a group that calls for gays to be put to death.

In June, Sharief was interviewed by Shafayat Mohamed, the imam of the Darul Uloom mosque, located in Pembroke Pines. In July, she spoke at the mosque. Darul Uloom has been a haven for high-profile terrorists. “Dirty Bomber” Jose Padilla was a student of Mohamed’s at Darul Uloom, and now-deceased al-Qaeda commander Adnan el-Shukrijumah was a prayer leader there. Mohamed, himself, was thrown off a number of community boards for his public vitriol against homosexuals. In February 2005, Darul Uloom published an article written by Mohamed, titled ‘Tsunami: Wrath of God,’ claiming that gay sex caused the 2004 Indonesian tsunami.

Also in June, the Muslim community hosted a town hall meeting for Sharief. Ironically, the moderator for the event, Khurrum Wahid, was the same moderator for the ISNA event she refused to speak at, over a decade earlier. Wahid is the National Chairman of Emgage Action, an Islamist group that attempts to disguise its sinister goals as political advocacy. Wahid, as well, has been an attorney for many of the high-profile terrorists that the US government has prosecuted, including members of al-Qaeda and the Taliban, and reportedly, Wahid himself was placed on a federal terrorist watch list in 2011.

In a poll that was conducted last month to see which Democrat candidates vying for Hastings’ seat were the most popular with Democrat voters, Sharief scored a close second, in a field of nine candidates (As of this writing, eleven Democrat candidates have qualified). Most likely, given the demographics of this congressional district, the winner of the November 2, 2021 Democratic Primary will be the next representative. And given Sharief’s courtship and participation with the radical Muslim community, her winning this seat should and must be seen as a threat to our nation.

Former Rep. Doug Collins Will Not Seek Office: ‘Goodbye for Now, but Probably Not Forever’