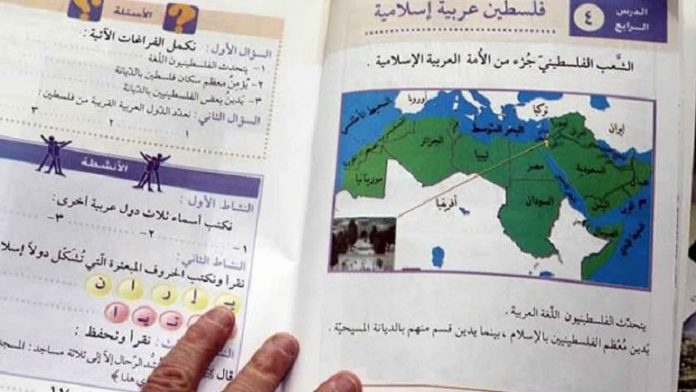 A decades-old systemic indoctrination of children.

In Palestinian Authority (PA) school curriculum, “traditional Islamic concepts such as Jihad and martyrdom” are “emphasized in the books much more than the solidarity on the Arab national basis,” concluded a 2017 study of PA textbooks. This analysis worrisomely documented how Islamic doctrines of warfare against unbelievers justify a relentless struggle to destroy Israel, a belief system that remains vitally relevant today as critics challenge American PA support.

Entitled Schoolbooks of the Palestinian Authority (PA): The Attitude to the Jews, to Israel and to Peace, the study reviewed PA educational materials published in the preceding four years. The Israeli academics Arnon Groiss and Roni Shaked conducted the study for Jerusalem’s Center for Near East Policy Research. Funding came from the Simon Wiesenthal Center and the Middle East Forum, for which this author writes.

“PA schoolbooks’ attitude to the Jews, Israel and peace is based on three fundamentals: de-legitimization, demonization and indoctrination to violent struggle,” the study concludes. “There is no call for peace or coexistence with neighboring Israel,” which “is not recognized as a sovereign state” and its “cities are not shown on the map except rarely, as foreign settlements,” the study adds. The textbooks present Zionism “as a colonialist movement in the service of Western Imperialism,” with “genocidal intentions toward the Palestinians.”

Hatred and historical revisionism go hand in hand in the PA’s schoolhouse rock. “Israel is massively demonized” in the schoolbooks, the study notes, and Jews “are de-humanized as wolves and snakes” while a Molotov cocktail attack on an Israeli bus is grotesquely termed a “barbecue party.” Meanwhile “not a single reference to any Jewish presence in the country in antiquity has been encountered so far in the schoolbooks that started to appear in 2016.” Additionally, the “chapters on World War II in history textbooks for grades 10 and 12 do not mention the Holocaust at all.”

Yet most striking in the study is the PA scholastic focus on Islamic indoctrination. This “elevates the struggle for the liberation of Palestine to a level of an uncompromised religious struggle,” the study observes. “The Muslim is superior to others in his love for his homeland because he does not act on the basis of patriotic feelings alone,” appears in one textbook.

Key events make “Palestine” indispensable in Islamic understanding. For example, Islam’s prophet Muhammad supposedly had a miraculous night journey from Arabia in the seventh century to the (then nonexistent) Al-Aqsa Mosque on Jerusalem’s Temple Mount and thence into heaven. Thus “God has blessed Al-Aqsa Mosque…and made it and its surroundings a land of Standing-on-Guard [Ribat] until the End of Days,” explains one PA text.

The study quotes textbook passages such as “Islam has imposed the duty of Jihad upon the Muslims until the End of Days, in order to…confront the forces of unbelief and tyranny.” This “is the highest apex of Islam.” The textbooks also explicate Quran 5:51: “Becoming friends with infidels, getting closer to them, supporting them, loving them and showing affection to them by words or deeds or intentions are considered contradictory to [Islamic] belief.”

Various textbook readings instruct pupils that jihad is integral to Islamic institutions and practices. A mosque is a “gathering place for Islam’s armies,” declares one passage. Another explains that Islamic alms or “Zakat money is paid to the Jihad fighters [mujahidin] and for the purchase of weapons and combat necessities.”

For the jihadist fallen, the PA textbooks extol Islamic teachings about a glorious afterlife. A male martyr has his sins “forgiven with the first drop of blood that drops out of his body” and is “wedded to 72 beautiful ladies of Paradise.” Therefore a poem in a seventh-grade textbook depicts a would-be shahid writing that the “flow of blood gladdens my soul.”

Likewise Islamic antisemitic doctrines saturate the PA curriculum, such as in the notorious genocidal hadith or canonical saying of Muhammad that the “End of Days will not come until the Muslims fight the Jews,” the study documents. Thus, “Jews are demonized in the PA schoolbooks as enemies of Islam’s revered prophets,” notably Islam’s founder Muhammad in seventh-century Arabia. This “process of making the Jews a target for hatred intensifies when religion and history lessons discuss the political rivalry between Prophet Muhammad and the Jewish inhabitants of the city of Medina and the Khaybar oasis in Arabia.”

Islamic denigration and appropriation of Judaism also indelibly imprints PA instruction. “In Islamic Education classes the Children of Israel are described as lacking faith, quarrelsome, obstinate and corrupt” and “have distorted the Torah given to them by God,” the study observes. Jewish holy places such as Jerusalem’s Wailing Wall appear “in the books as Muslim holy places usurped by the Jews.” Similarly, “Abraham, Moses and David…are sanctified in Islamic tradition as ‘Muslim’ prophets and are completely detached from their own Jewish people.”

The authors soberly summarize their exhaustive review of PA textbooks that:

it is clear to any intelligent person that no advancement towards a peaceful solution to the present conflict is to be anticipated without total change in this line of thought that the PA has been systematically inculcating into its students’ minds for over twenty years by now.

Especially “unthinkable” are PA textbooks in United Nations Relief and Works Agency for Palestine Refugees in the Near East (UNRWA) schools, the study notes, where about one quarter of all students in the Palestinian territories study as “refugees.” UNRWA “is supposed to be committed to the UN principles of” conflict resolution and “is also obliged, as a UN organization, not to allow the presentation of a member state—Israel—to its students as a delegitimized entity.”

As Groiss stated during a March 21, 2016, interview with this author, UNRWA actions make mockery of its slogan used for several years after 2010 that “peace starts here.” “There are things which UNRWA must not teach,” he said; “you cannot teach war and jihad and martyrdom.” The next day, he participated in a Center for Near East Policy Research Capitol Hill briefing where he noted that, “by educating children to be martyrs, you are actually doing child abuse.”

At the Rayburn House Office Building, the center’s director David Bedein showed a clip from the film UNRWA Goes to War, whose narrator stated that “war starts with UNRWA.” He noted that UNRWA had appointed the singer Mohammad Assaf as its youth ambassador, a position that he held until 2017. “Mohammad Assaf sings songs of praise, liberation, and mass murder,” Bedein said of this jihadist propagandist to whom Israel later banned entry in 2020.

As Bedein recently noted, nothing has changed in Palestinian education within UNRWA and beyond in subsequent years. Indeed, Groiss noted in 2016 that PA textbooks are merely one part of wider hatreds in Palestinian culture, where the “whole atmosphere is negative” towards Israel. Fittingly, Republicans legislators have recently called for cutting American aid to UNRWA.

The 2017 PA textbook study called for drastic reforms. For example, the “Islamic traditional values of Jihad, Ribat and martyrdom should be discussed in historical contexts only – as done, for instance, in pre-revolutionary Tunisian schoolbooks – and not as guidelines for future actions.” Otherwise, Americans and other Western taxpayers are simply financing jihad against Israel.

Even without reforms in PA education, the 2017 study has provided great insight into the Palestinian cause and norms widely held among Muslims. The main motivation for fighting Zionism and Israel has always been religious, not nationalistic, and this struggle draws upon jihadist doctrines deeply anchored within Islam. People around the world ignore these lessons at their peril.