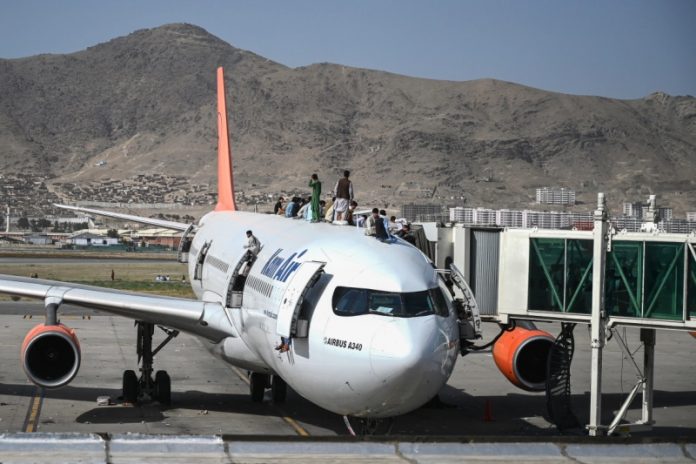 Biden’s pullout from Afghanistan has been the worst managed event in American history.  With Saigon as an example, the administration knew exactly how bad it would be.  There’s a lot of finger-pointing going on now, but, at bottom, people are wondering if the unconditional Taliban takeover, including the trapped Americans, is a deliberate policy.  On Tucker Carlson’s Wednesday show, Lara Logan said, “Yes, it is.  This was what the government wanted.”

A little background: We’ve been in Afghanistan for 20 years now, ostensibly to “nation-build,” à la Germany and Japan.  Back then, though, we completely defeated them and installed ourselves in power, only slowly releasing power if they’d fully embraced Western democratic values.  And we still stayed for over 70 years, keeping an eye on things.

We never flattened Afghanistan.  Instead, we imposed ourselves on top of a medieval Islamic country, including the whole LGBT madness.  It worked for those already geared to Western values and those looking to take American money.  The Afghan military, many members of which were brave fighters, clearly would never be ready to lose their training wheels — with our military being the training wheels.  Some of you may remember this video, which embodies problems of both culture and competency:

In addition, knowing the good guys from the bad was always an issue.  Sean Parnell’s story makes that point:

In 2020, Trump announced that he was beginning talks with the Taliban to effectuate a peaceful withdrawal.  Trump explained that there were myriad conditions to the withdrawal, all aimed at forcing the Taliban to let people and military equipment out safely.  It’s likely that if Trump had been in charge, scenes like this one wouldn’t be played endlessly across Afghanistan:

Additionally, the Trump administration had a comprehensive “crisis response” for a situation such as this one — namely, a sudden military collapse requiring mass evacuation.  The Biden administration canceled that plan in June.

Indeed, Biden, from his first day in office, canceled everything Trump had done.  The goal was to erase any remnants of his presidency.  With strokes of the pen, our border vanished, our economy was broken, our energy independence ended, race became paramount, and transgenders were everywhere.

With that track record, why in the world would Biden insist that, because Trump wanted to pull out of Afghanistan, Biden really had no choice but to follow up on that promise?  This, of all things, is the one Trump policy he leaves in place?

And why in the world would an even marginally competent military and State Department be caught unaware by the Taliban and depart in such haste that they left behind every bit of military equipment and weaponry?  At the very least, they could have destroyed weapons, vehicles, and planes.  But they didn’t.

And that’s where Lara Logan comes in.  What she told Tucker will confirm your worst fears: things are playing out as they are, complete with violence, death, chaos, and a massive risk of a hostage crisis, because that’s what the government wants, much as it wants an open border:

Investigative journalist Lara Logan, host of “No Agenda” on Fox Nation, said Wednesday it is clear the United States government prefers the chaotic outcome in Afghanistan as well as the criminal and humanitarian crises at the U.S. southern border.

Logan told Fox Nation’s “Tucker Carlson Today” that whoever in Washington is truly “pulling the strings” of the government intends for these crises to intensify, given their oft-unstated ability to stop them from worsening.

“Whoever is in power right now, whoever is really pulling the strings — and I don’t know that — they could do anything they want to change this. And they’re not.”

As she explained, America has the intel ability to know when every sparrow farts (my words, not hers), so the Taliban’s activities were not a surprise.  Likewise, we have the military capability to stop the Taliban in its tracks, even now.  The problem is that we don’t want to:

Logan explained that the Taliban’s main base is not Afghanistan but Pakistan, and that Islamabad is the only regional government with nuclear capabilities. Combining those factors helps explain why there’s no urgency to course-correct in Afghanistan.

She said the U.S. helps fund a good portion if not all of the Pakistani defense budget in terms of military and intelligence services, like the ISI.

Logan posited that the NGIA, which controls government satellites and other armaments, has been watching the Taliban taking control of abandoned U.S. military equipment; bringing it back east into Pakistan.

“The NSA and the [NGIA] are watching this happen in real time,” she claimed.

“And they’re doing nothing to stop it. Why not? So what the Afghans will tell you … is that the United States chose this outcome.”

“The United States government could change this even today. And they don’t do it. They don’t use the leverage they have with Pakistan. They’ll give you 5,000 reasons, but it doesn’t matter.”

For the government, Pakistan matters, and Afghanistan does not — although, as Tucker pointed out in his monologue, it helps that the left is desperate to flood America with Afghan refugees.  When he said what a terrible idea that would be, he even cited Cheryl Benard, whom I discussed two days ago:

Tucker: We are living through the biggest influx of refugees in history | https://t.co/F5jXPeuQAY

America is at a very dangerous crossroads.  It appears that she is being led by an incompetent moron, but it’s probably worse than that: she is led by people who wish to “fundamentally transform” America and place purported global goals above American well-being, and who don’t care how many people die to achieve their goals.