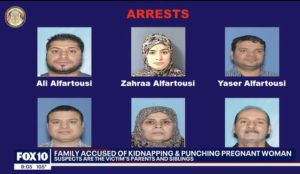 In the Qur’an, a mysterious figure, known as Khidr in Islamic tradition, kills a boy in an apparently random and gratuitous attack. He then explains: “And as for the boy, his parents were believers, and we feared that he would overburden them by transgression and disbelief. So we intended that their Lord should substitute for them one better than him in purity and nearer to mercy.” (18:80-81)

And according to Islamic law, “retaliation is obligatory against anyone who kills a human being purely intentionally and without right.” However, “not subject to retaliation” is “a father or mother (or their fathers or mothers) for killing their offspring, or offspring’s offspring.” (Reliance of the Traveller o1.1-2).

Muslims commit 91 percent of honor killings worldwide. The Palestinian Authority gives pardons or suspended sentences for honor murders. Iraqi women have asked for tougher sentences for Islamic honor murderers, who get off lightly now. Syria in 2009 scrapped a law limiting the length of sentences for honor killings, but “the new law says a man can still benefit from extenuating circumstances in crimes of passion or honour ‘provided he serves a prison term of no less than two years in the case of killing.’” And in 2003 the Jordanian Parliament voted down on Islamic grounds a provision designed to stiffen penalties for honor killings. Al-Jazeera reported that “Islamists and conservatives said the laws violated religious traditions and would destroy families and values.” In Iran, according to the New York Times, the legal system “treats parents who murder their children with relative leniency, as the maximum sentence for the crime is only ten years.”

PEORIA, Ariz. – Police arrested six members of a Phoenix-area family they say targeted a 20-year-old relative and tried to kidnap her because they disapprove of her boyfriend, who doesn’t share their Muslim faith.

The woman, who is 20 weeks pregnant, told police she was afraid her relatives will kill her because they believe she has brought dishonor to the family, detectives wrote in a probable cause statement filed in Maricopa County Superior Court following the arrests on Thursday. Police believe the family wanted to send the victim back to Iraq, authorities wrote.

In court records, detectives describe accusations of threats and assaults, most recently at a medical building in Avondale last week. Police said the relatives took the woman’s cell phone and purse, along with her boyfriend’s gun, during a “violent assault.” The woman grabbed onto a responding officer, pleading “please, don’t let them take me,” according to court records.

In a statement released on Aug. 27, police identified the suspects as:

The victim, according to court documents, said her family tried to kill her and her boyfriend in Phoenix, which led to them to move to Yuma in an effort to get away from her family….

On May 3, court documents stated that the victim’s boyfriend received a threatening voicemail from Ali.

In the voicemail, which was received by the victim’s boyfriend on April 29, Ali allegedly threatened to kidnap the boyfriend’s 15-year-old sister of the victim was not returned to her family.

“This is Ali, her brother. If you don’t bring my sister back, I’m going to kidnap your sister. I’m not scared of your American laws,” the message stated, according to court documents….

Investigators stated in court documents that during an interview with the victim, the victim said she has ‘dishonored the family,’ and feels she will die.

“[The victim] also made mention she feels she will end up like ‘Noor,’” read a portion of the documents, referencing a so-called ‘honor killing’ murder investigation in Peoria.

According to reports by the BBC in 2011, Faleh Hassan Almaleki, who was 50 at the time, was convicted of running over 20-year-old Noor Almaleki and another person, in what prosecutors called an ‘honor killing.’ Almaleki was sentenced to over 30 years in jail….

Both Fares and Souad, according to investigators, said they did not feel their actions were criminal in nature during their respective police interviews.

Ali, according to court documents, said he would still find the victim even of he was in prison, and the victim was 80 years old….