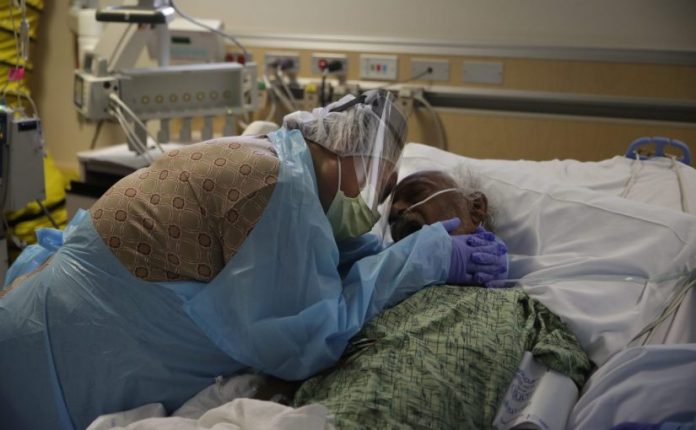 Fifteen top-level frontline doctors met in Puerto Rico last week to form a strategy to counteract the unbridled corruption they say is destroying the American medical profession and leading to thousands of unnecessary deaths.

The group, called the Pandemic Health Alliance, drafted a “Physicians Declaration” and released it Sept. 12 at a global Covid summit in Rome, Italy.

These doctors are not happy with how Covid patients in U.S. hospitals are being treated, or more precisely, not being treated.

The key to Covid recovery is early treatment, they said.

But in the current environment, many doctors and hospitals are either not telling patients that there are proven treatments available, or outright denying patients who ask for such treatments.

Stories are piling up about people who received no treatment until it was too late. Then they were given the wrong treatment. They were placed on a ventilator and given Remdesevir, a controversial drug with known harsh side-effects, including kidney failure.

Veronica Wolski was one such victim. She was a well-known Chicago freedom activist most known for her work on “The People’s Bridge” over the Kennedy Expressway.

Wolski died after being refused proper Covid treatment. Her power of attorney, Nancy Ross, spoke out on the Stew Peters Show, see clip below.

Ross described the unnecessary, gut-wrenching slow death of her friend:

“Very quickly she was put on high levels of oxygen … and they began Remdesevir. She called me, she told me she didn’t want the medicine. ‘I don’t want this. I want them out.’ I have multiple texts from her saying ‘get me out of here. Get me home. Bring me oxygen. Get medical transport and take me out.’ I didn’t know what was going on. I tried to contact family and friends and was assured that they were following frontline protocols, and that she would be getting some of the treatments she really wanted. It was all very confusing, very disturbing. I finally told her ‘I’m coming to Chicago.’”

After she arrived in Chicago, Ross said she came up against repeated roadblocks over the next 10 days.

“Security escorted me out of the building multiple times,” she said. “We were really trying to work with them, but it was clear Veronica was being denied some treatments, even food and nutrition, which we had to beg for.”

LeoHohmann.com has been informed of incidents in which hospitals are suspending physicians and investigating them simply because they prescribed the drug Ivermectin, a well-known anti-microbial that entire nations are using with great success to treat Covid patients.

Three doctors with Pandemic Health Alliance discussed the dire situation being faced by thousands of Americans in a Sept. 13 interview with Steve Bannon, host of War Room: Pandemic. Many are trapped in hospitals, left to die, with no one to advocate for them.

“This is a 1776 moment for all honest physicians and we need to show that the emperor has no clothes,” said Dr. Ryan Cole, a pathologist and director of research for Pandemic Health Alliance.

Out of the more than 4,000 Covid patients Cole has treated with his protocols, which include Ivermectin, he said zero have had to go to the hospital and there have been zero deaths.

Cole said these are “unprecedented times” in the medical profession.

“We took an oath and we’re going to honor it,” he said. “This is a freedom moment and we need to fight back.”

“The profession of medicine is at a crossroads…There is an unprecedented assault on our ability to care for our patients.”

“Public policy has chosen to ignore fundamental concepts of science, health and wellness, instead embracing a ‘one size fits all’ treatment strategy which has led to more illness and death than the individualized, personalized approach to healthcare.”

Gessling successfully treated about 1,500 patients with COVID-19, none of whom died. She is the group’s medical director.

Malone, the original inventor of the mRNA technology, said the doctors are joining together to defend “the freedom of physicians to practice.” Doctors are “being prevented from providing early treatments.”

Even at the pharmacy level, major pharmacists like Walgreens and CVS are blocking essential prescriptions such as Ivermectin and Hydroxychloriquin.

“We are in a situation where the government has seized control of the medical profession and this is causing death,” Malone said.

Cole said many hospitals have arranged 20 percent bonuses for physicians who prescribe Remdesevir. It was designed to treat Ebola and has had catastrophic results. Now it’s being prescribed for Covid patients with advanced symptoms.

“They’re threatening physicians if they don’t follow a one-size-fits all template, trying to dictate their practice through unprecedented pressure, blocking early treatment until patients are so severely ill that they have to be admitted to the hospital,” Cole said.

“No early treatment is being administered. They’re tested for their blood oxygen levels and then sent home, only to reappear later in much worse shape. We see much better outcomes in Third World countries that don’t have all these restrictions on care and are using effective therapeutics.”

The ‘drive to vaccinate everyone‘

Malone refused to speculate on why hospitals and physicians have succumbed to the politicization of Covid treatment by the WHO, CDC, NIH and Dr. Anthony Fauci.

“There’s no underlying logic to it other than this drive to vaccinate everyone,” he said. “It’s in the U.S. where we have this unique vaccine-exclusive strategy…It’s unprecedented and it’s costing hundreds of thousands of lives.”

Fauci came out last week and said he thought Biden was going too soft with his mandates, that he should not have allowed an option for employees to show a negative Covid test, only proof of vaccination.

“The government has decided to go full authoritarian. They are putting the levers and pressures on everybody,” Malone said. “We know this bizarre approach (of not treating anyone until they are so sick they have to go to the hospital) is not going to stop this pandemic.”

In fact, it’s going to extend the pandemic, at least until the criminal globalist elites have realized their agenda, which involves using Covid to install their Great Reset on the world. [The Great Reset, reported on extensively by LeoHohmann.com, represents the agenda of the World Economic Forum and United Nations to implement a global one-world surveillance state with a digital control grid, based on the Chinese model, that nobody will be allowed to opt out of.]

The biggest target is the United States, and this is why the U.S. medical community is coming under the most pressure to not do the right thing for patients.

“We’re having an epidemic of death and pain and which, interestingly, other nations aren’t seeing, they’re being pragmatic,” Malone said. “They’re open to other approaches.”

Below are some resources for early treatment that may keep you out of the hospital, which could save your life.

For Ivermectin or HCQ and info

FLCCC: Various protocols and they provide list of doctors who can prescribe Ivermectin and Hydroxychloroquine

McCullough’s Home treatment guide: Zinc must be given with the above, plus vitamin D and C, and B complex is helpful. (Per Dr. McCullough, zinc sulfate or gluconate preferred, but other doctors have not mentioned his concern re Zinc picolinate and his NOT recommending that because of a report about liver damage from 20 years ago).

AMA: Against medical advice form to pull patients out of the hospital if they’re not cooperating with your DMA.

To file a report of vaccine injury online: vaers.hhs.gov/esub/index.jsp

Openvaers.com: For public viewing of the latest VAERS reports of vaccine adverse events.